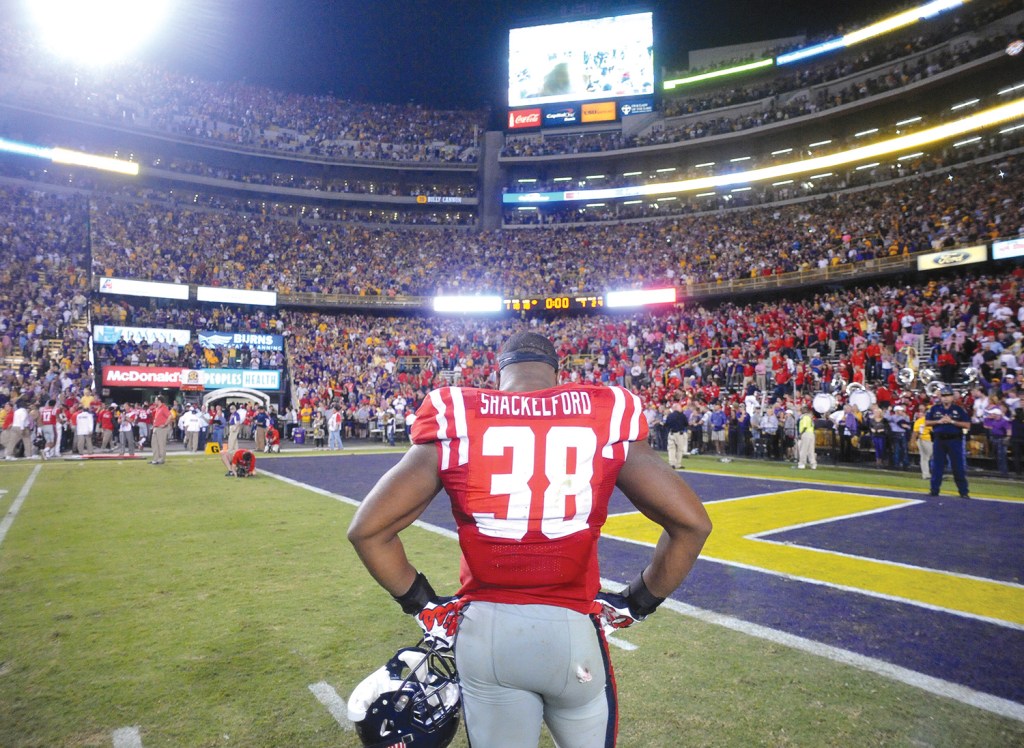 The Rebels’ offense was bottled up by LSU, a defense that’s been virtually immovable was pushed around, and No. 3 Ole Miss fell from the ranks of the unbeaten with a 10-7 loss Saturday night in front of 102,321 at Tiger Stadium.

No. 24 LSU (7-2 overall, 3-2 SEC) found the end zone the final time on a night that was difficult for either team to do so, using Anthony Jenning’s 3-yard touchdown pass to Logan Stokes with 5 minutes, 7 seconds remaining to pull ahead. Ole Miss (7-1, 4-1) got the ball back two more times but couldn’t do anything as the Rebels dropped their sixth game in their last seven trips to Baton Rouge.

“It’s difficult,” Ole Miss head coach Hugh Freeze said. “We’ve been on the good side of these for seven (weeks) in a row now. This league is brutal.”

Bo Wallace’s fourth-down sneak at LSU’s 47-yard line was stuffed with 1:44 left, and his last pass of the night was intercepted by Ronald Martin at the goal line with two ticks left.

Ole Miss was in range for freshman Gary Wunderlich to try a 47-yard field goal, but LSU iced him with a timeout before the offense went back on the field to try to pick up some more yards.

Wallace was supposed to go to the shorter route underneath or throw it away with time still on the clock, Freeze said. The result was Wallace’s first turnover against an SEC opponent.

LSU did exactly what Ole Miss players and coaches said it would do throughout the week, leaning on a bruising running game to help set up shots downfield. Ole Miss kept the deep passes to a minimum, intercepting Jennings twice, but the Tigers’ backfield gave the nation’s fifth-ranked run defense fits.

LSU piled up 264 rushing yards and created multiple scoring chances with more than 100 of those midway through the second quarter. Freshman Leonard Fournette went for 113 yards, Terrence Magee finished with 74 and Kenny Hilliard had 63.

“I just don’t think we were fitting (the run) as well as we needed to fit it,” defensive coordinator Dave Wommack said.

Ole Miss forced Colby Delhoussaye into a 28-yard field goal attempt on LSU’s first possession, which he pulled left. Five runs and a 40-yard completion to Fournette got the Tigers to Ole Miss’ 3 on their next possession, but Deterrian Shackelford stripped Fournette short of the goal line with Cody Prewitt recovering the loose ball in the end zone.

Magee moved LSU into Ole Miss territory again on the Tigers’ next possession with four straight runs, but Prewitt ripped the ball away on the last one to end the drive. LSU again threatened with a 17-play, 90-yard drive to the Rebels’ 4 at the start of the second quarter, but the Tigers ended up settling for Delahoussaye’s 21-yard field goal.

LSU’s ground-and-pound attack allowed the Tigers to keep the ball for the 36 minutes. The Rebels had just five possessions in the first half, scoring their only points on Wallace’s 15-yard touchdown pass to Cody Core late in the first quarter.

“They just wore us down and kept the ball from us,” Freeze said. “We didn’t have but two possessions in the second quarter. They just ate the clock, and they’re really good up front.”