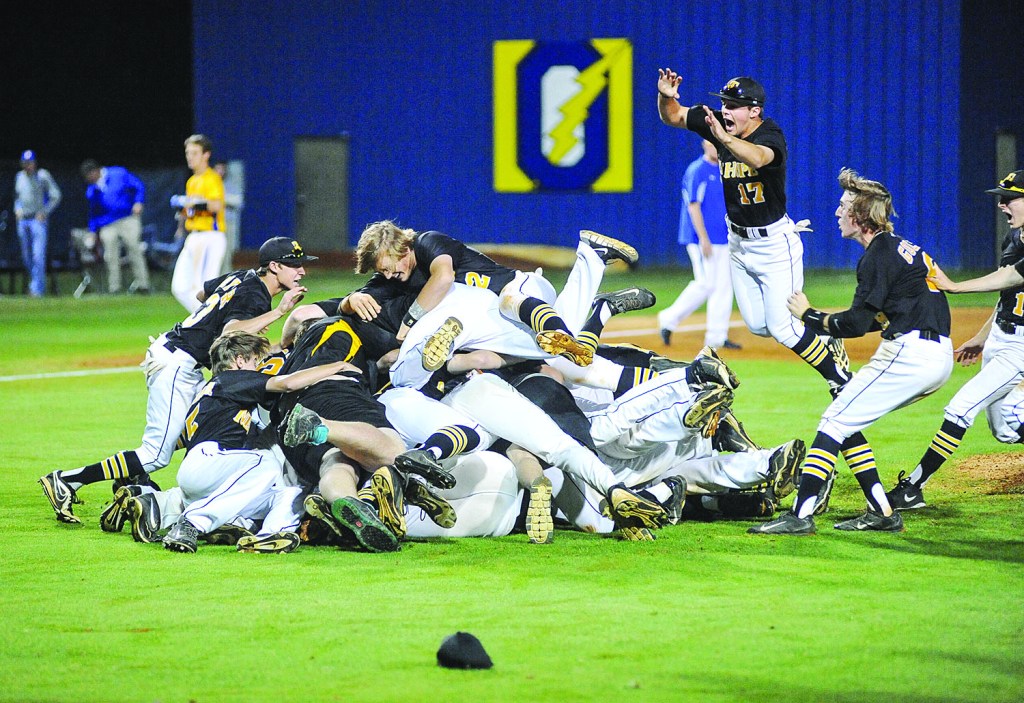 New Hope players celebrate their series-clinching win over Oxford in the MHSAA Class 5A North Half finals at Edwin Moak Field on May 16, 2014. The Chargers insist they haven’t forgotten the loss — or the celebration — heading into this year’s series, which starts Tuesday. (Bruce Newman)

It’s a play that’s embedded in the minds of two different sets of players for vastly different reasons.

Nearly a year ago to the day, members of Oxford’s baseball team believed their season had at least one more game. They were convinced they’d even their series against New Hope, force a deciding third game, and then, well, who knows.

Trailing the Trojans by a run in their final at-bat of Game 2 of the teams’ MHSAA Class 5A North Half playoff series, Hunter Roth scalded a ball just inside the first-base line that would plate the tying and winning runs to send the series back to New Hope for a third and final game to decide who would earn a trip to Jackson to play for a state championship.

Or so everybody thought.

“I thought it was a double,” recalled Oxford’s Jack McClure, then a junior.

But New Hope’s Wells Davis laid out and snagged Roth’s hot shot along the chalk, keeping the Chargers’ baserunners at second and third. A popout later, New Hope’s players celebrated their second straight trip to the state championship series with a traditional dog pile at the center of Oxford’s home field.

The Division 2-5A rivals are back here again.

Oxford, which hasn’t lost since then, swept Center Hill and Germantown in its first two series of this year’s playoffs while New Hope disposed of Neshoba Central, Pearl and Lewisburg to reach the North Half finals for the third straight year.

Oxford will host the first game Tuesday at Edwin Moak Field. Game 2 will be at New Hope on Friday before the series would shift back to Edwin Moak Field on Saturday if necessary.

And the Chargers don’t want a repeat of what happened last May.

“These kids haven’t forgotten the dog pile sitting out here in North Half,” Baughman said. “It’s driven them since that time last year.”

Said junior pitcher Jason Barber, “It was a real punch in the face watching them dog pile on our field.”

Anybody but the nationally ranked Chargers representing the North in next week’s state championship series and squaring off against either East Central or George County would surprise many at this point. Oxford, now 31-0 with its series-clinching win over Germantown on Thursday, comes in as high as No. 6 in the country in Baseball America’s latest rankings.

The Chargers have one of the best 1-2 punches around in Barber and fellow junior right-hander Houston Roth, who are a combined 17-0. Barber’s earned run average is still sitting at zero through 57 innings this season while Roth (1.46 ERA) hasn’t allowed more than three earned runs in any of his eight starts.

“Nobody can score on them, and that’s the biggest thing,” Boyd said. “We’re just going to have to maybe take advantage of a mistake or two and try to find a hit at the right time.” 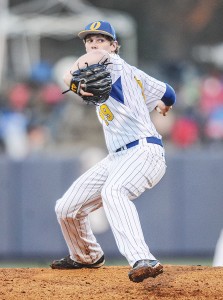 One of junior right-hander Houston Roth’s eight wins came in the Chargers’ 3-1 victory over New Hope back on March 27. (Bruce Newman)

But the Chargers’ bats will be tested by some of the best pitching they’ve seen, led by New Hope ace Josh Stillman, a Northeast CC signee.

Three of the Trojans’ five losses have come to Oxford, but two of them were decided by four runs or less. Stillman, who owns a 0.96 ERA, started two of those games and went the distance in both, allowing just five earned runs.

Stillman has been particularly sharp as of late, yielding just one earned run or less in five of his last six starts to help New Hope rip off nine straight wins.

“We’re going to have to play well because New Hope, they’re playing better than they were against us earlier in the year,” Baughman said. “We know that. We’re just proud to be (in North Half). We’re proud to be there for the third time in five years, and we’re going to try to get over the hump this time.”

Oxford’s been waiting nearly 365 days for the postseason rematch.

“New Hope says they want us, but we want them,” Roth said. “We want to play them, and I think it’s going to be a good series. Going to be a fun one.”

Xavier’s Stainbrook too much for Ole Miss bigs to…