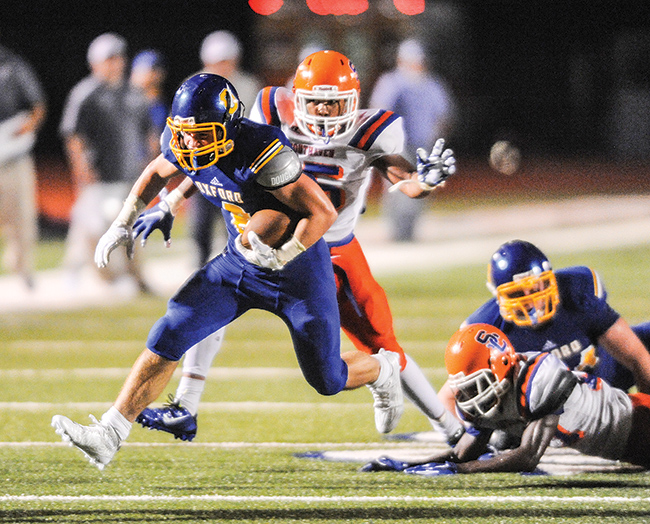 Coaching in his final season opener for the Chargers on Friday, Hill watched his team commit a whopping 24 penalties that kept the Chargers’ offense behind the chains for most of the night and helped keep Southaven’s offense on the field. Yet Oxford didn’t have much trouble keeping its distance in a 35-0 win at Bobby Holcomb Field.

Oxford finished with 508 yards of offense, needing bigger chunks of yardage to overcome the 194 yards the Chargers were set back by all the flags. Oxford led 14-0 until a touchdown run by Drew Bianco and a 32-yard strike from senior quarterback Jack Abraham to Ken Presley and a 71-yard connection from Abraham to Barry Flowers helped the Chargers pull away late.

“It’s hard to get in a rhythm when it’s first-and-20 and 25,” Hill said. “They’ll see that penalties will kill a drive. We can overcome a lot of penalties, but we can’t overcome all those penalties and just stupid penalties.”

Abraham finished 26 of 43 for 343 yards and three touchdowns, but the offense got a boost from Bianco, who piled up 142 yards and two touchdowns on 20 carries in his first varsity start. His third-quarter touchdown came on fourth-and-2 from Southaven’s 31-yard line when Bianco shed a tackler, broke outside and raced down the right sideline to the end zone to put Oxford up 21-0.

“At the beginning of the game, first varsity start, I was a little nervous,” said Bianco, who also had a 1-yard score just before halftime. “But (center Colton) Skid(more) was just telling me, ‘Hey, keep running hard. We’re going to make holes. Just keep moving your feet.’ That’s what I tried to do the rest of the game. Just tried to help the offense as much as I can picking up blitzes and running through the holes.”

“He runs like Johnny Musso to me,” Hill said. “He’s just a tough nut, runs hard, and when he’s running, you’ve got to stick his nose in the dirt.”

Oxford got on the board with Abraham’s 27-yard touchdown pass to D.K. Metcalf with 1:48 left in the first quarter. The Chargers struggled to get much else going early, coming up empty on five of their first six possessions.

But Oxford’s defense was stout and opportunistic in its effort to keep Southaven off the scoreboard.

Eight of Oxford’s penalties came on defense, including three pass interference calls on one drive midway through the fourth quarter, but Korbin Harmon sacked Southaven quarterback Matthew Martin on fourth down at Oxford’s 24 to end the threat.

“Both sides made mistakes, but we both made up for them at the end,” Oxford defensive end Marcel Pegues said.

Next up for Oxford is a trip to Class 6A power Starkville this Friday for the Little Egg Bowl. The game will be televised nationally on ESPNU, and the Chargers are well aware a cleaner game is the first step in giving themselves a chance.

“Some of them are young penalties that they know better or should know better,” Hill said. “We’ve just got to get it cut out and play.”