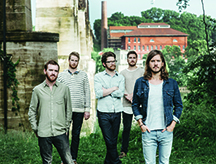 Moon Taxi, hailing from neighboring Alabama, will be playing The Lyric tonight, which self-admittedly is a big step from their first show in Oxford back in 2009.

“We played this house party with Zoogma back in ’09,” said Tommy Putnam, co-founder and bassist of Moon Taxi. “I can’t remember where, but I remember it being so hot in there.”

When they were starting out in their hometown of Birmingham, Moon Taxi made Mississippi its first addition to its tour schedule.

“That was our circuit for a while,” said Putnam. “Around Alabama then down Mississippi. We played the usual places, Hattiesburg, Jackson.”

The neighboring state became a good fit for them, keeping their tours booked and crowds typically full.

“We kind of found a home in Mississippi,” Putnam said. “And y’all have always been good to us. We love Oxford.”

Oxford has also given them a handful of memories over the years, the one standing out the most coming from a time they played at one of the fraternities here.

“We were playing that night but got in pretty early around like 10 or 11 a.m.,” Putnam said. “We got there, like, three of them were already just absolutely hammered. They all dug the show though.”

Since their first show here in 2009, they’ve worked their way up through the local venues to where they can now fill out The Lyric.

“We started at that house party then got booked at Proud Larry’s,” said Putnam. “We played there a few times and then they pulled us up to The Lyric. That place has always been really fun to play. The crowds there are always nuts.”

While on tour they try to not fall into a pattern of predictable songs, keeping the crowd surprised.

“We’ve been playing (“Whiskey Sunset” into “Blinded by the Light”) a lot,” said Putnam. “I’m trying to get more variety in our setlist.”

More recently, Moon Taxi have been working on their new album, Daybreaker, due out on Oct. 2. Talking about their new songs, Putnam was clearly excited and proud of what the band has been able to put together.

“Sonically, it’s a lot better than anything else we’ve done,” said Putnam. “And the songs are pretty varied. You’ve got some rock songs, some more poppy sound songs…overall it sounds top notch.”

“As far as plans go, I’d really like to get a late-night TV slot,” Putnam said. “So hopefully that happens soon. We’ve got about a week off now so we’re working on some ideas for videos off the album. Otherwise, just keep touring.”

You can find three singles off of the new album, Daybreaker, posted to their YouTube account, MoonTaxiMusic, or get them on iTunes. Tickets for the 8 p.m. show at The Lyric are still available at the box office.

Weekend Ticket: Music and a classic adapted play in…