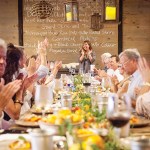 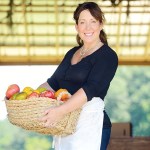 When Elizabeth Heiskell ran into NBC President Andy Lack, she didn’t miss the opportunity to tell him about her dream of being on the “Today” show.

“I told him, ‘so as soon as you get to your desk Monday, the first thing you’re going to do is call Matt Lauer and put me on the Today show,’” Heiskell said with a smile.

NBC’s “Today” will feature Elizabeth Heiskell Catering, LLC and Woodson Ridge Farms on Thursday in a piece that showcases tomatoes grown on the property and an evening Tomato Dinner. Erica Hill, weekend correspondent and co-anchor for the show, visited the farms to get show footage. It all started when Heiskell ran into Lack at a dinner she catered for the University of Mississippi. Shortly after visiting with Lack, she received a call from the Today show’s producer who suggested the crew come to Oxford.

Heiskell hosted the crew by bringing them to her tomato fields, cooking with them in her kitchen and preparing a tomato dinner that was reminiscent of the grape harvest in France. Menu items included fried green tomatoes with pimento cheese, Debutante Farmer Bloody Mary cocktails, Deloris’ fried chicken and more. The meal was served in the barn over lanterns and candlelight.

Heiskell said having the Today show at her property was a wonderful experience, and that the opportunity to tell the show’s viewers about Oxford may come up again later this year.

“It shows that Mississippi and Oxford are doing some exciting stuff,” Heiskell said. “They were fascinated so they’ve invited me to come back and do Bloody Marys and Biscuits with Matt sometime this fall.”

Heiskell became fascinated with “Today” after a friend was featured on “Good Morning America.”

“I thought, well, if she can get on ‘Good Morning America,’ I’m going to set my sights on the Today show,” she said. “Now that it’s come true, I kind of wish I had set my sights on ending world hunger or peace, but it’s kind of a fun lesson for my girls. I have three children and they’ve always known this is my thing. I would watch the show and tell them ‘One day I’m going to be on there’ and they would laugh and roll their eyes.

“If you work hard and don’t give up, even if it is something silly, if you really want to do it you can absolutely achieve it.”

Those interested in seeing Oxford on the show should tune in or set their DVR to “Today” from 7 to 10 a.m. Thursday.