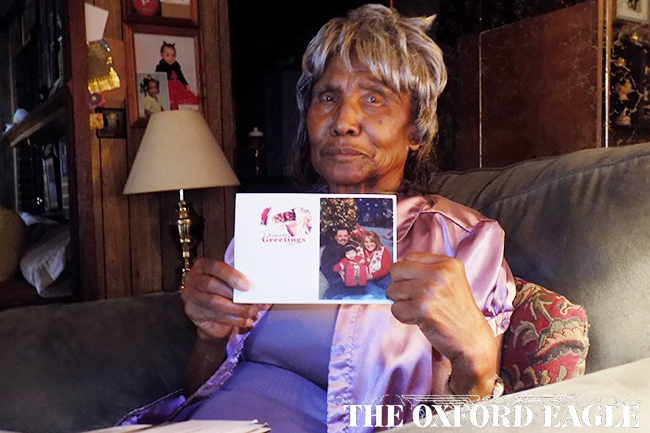 Lucinda Buford has won an award for 16,000 hours of volunteer service, but it’s just a fraction of her time spent as a caregiver.

Buford, 82, of Abbeville, recently received the Carole B. Haney Spirit of Volunteerism Award for outstanding volunteerism with North Mississippi Regional Center’s volunteer program for over the past 16 years.

The NMRC provides caregiver and other services to individuals with intellectual disabilities from 23 of the northern counties.

Buford has been a caregiver for 42 years to children and a volunteer for an additional 18 years.

“I just love taking care of children,” she said.

Buford explained she was first introduced to the volunteer program through Minnie Cooper, a social worker and a member of her church.

For the past several years Buford has been taking care of two women in their early 20s at the hospital.

Buford said most children at NMRC need love and attention. She added most are not able to feed themselves among other tasks and need assistance that she is more than happy to provide.

“I just love them all like I do my own,” she said.

Buford has eight biological children and about 10 additional children she considers her own that she has taken care of over the years.

She talked about her children’s accomplishments since they have grown and mentioned her eldest biological son, Robbie Buford, is a teacher, but also talked about Les Jones and Julie Jones Anderson. Jones and Anderson are siblings who Buford took care of when they lived in Oxford. She proudly said, “Les is a doctor” and “Julie teaches at Ole Miss.”

Buford worked hard to encourage and build up all of the children she has kept over the years.

“I told them they could be anything they wanted to be if they studied hard,” she said.

She also did her best to instill the meaning of family and the importance of having faith in God. She always took them to the park and the zoo in Memphis.

“I told them family is the most important thing. Stay with the Lord, put Him first and you can do anything you set your mind to,” she said.

Buford is a devout Christian and reads her Bible every morning.

“It takes a lot of praying,” she said. Buford fondly remembers a time when she had to explain to one of her children why you should pray before each meal and not after you finished eating, no matter how hungry you were.

“They thought that was so funny for some reason,” she laughed.

Anderson had only great things to say about Buford.

“She is an amazing woman…she has always been our second mom,” she said.

Anderson was reluctant to put her child in the day care system, so Buford came out of retirement to take care of him.

“I just can’t think of a time in my life when she wasn’t there,” Anderson said.

When Jones was young, Buford insisted he would be a doctor. She even bought him his first doctor bag to play with as a young child. She predicted correctly and, after some deliberation, he became a pediatrician. Jones now works at University of Mississippi Medical Center in Jackson where he lives with his family. He still keeps in contact with Buford.

“We called her ‘Cindy’ because we couldn’t say ‘Lucinda’ when we were little,” Jones said.

For his first job, Jones worked for the Oxford EAGLE, delivering papers in the afternoon. His route took him through Abbeville, Buford’s neighborhood, so she would ride along frequently, folding the papers he would throw door-to-door.

Jones said Buford was always positive and never negative. She was quick to encourage and build up his confidence. She prayed for him.

“She has always put others first,” he said.

Buford’s compassion for others and her encouraging spirit have not aged a day since she kept Anderson and Jones; she still has the encouraging attitude.

All Buford said she is looking for is to support children.

“I knew they needed somebody to take special care of them,” she said.

Veteran has ties to Japanese surrender 70 years ago…