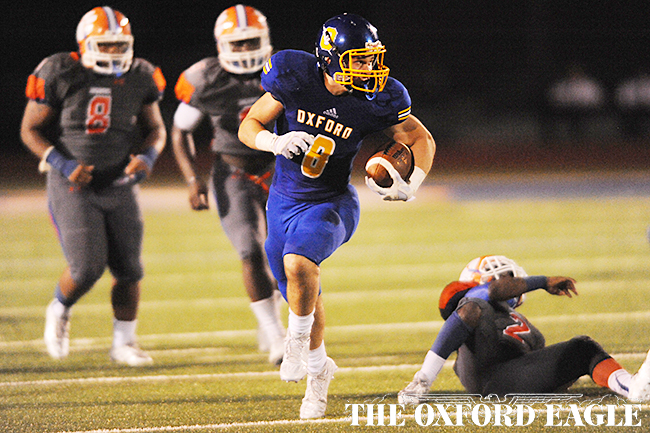 Special teams set the tone, and special teams were involved in a defining moment of Friday night’s top-5 showdown between No. 5 Oxford and No. 4 Madison Central. The Chargers’ late fourth-quarter comeback fell a few feet short when Connell Yoste missed a 34-yard field goal attempt to the right, and the Jaguars escaped Bobby Holcomb Field with a 31-29 win, staying undefeated on the year.
“I thought we played well,” Oxford coach Johnny Hill said. “Madison Central’s got a good team. I knew this was going to be a slugfest like that. Our kids didn’t quit. They played hard.”
The win capped a three-week stretch where Madison Central knocked off Meridian and Brandon before Friday night’s matchup.
“We’ve learned how to win,” Madison Central coach Brad Peterson said. “We hadn’t learned how to finish. We’ve had opportunities in all three games to finish, and that’s not taking anything away from Oxford. They made the plays when they had to to get back in the game.”
The fireworks began on the opening kickoff when Oxford (1-2) attempted an onside kick, which it was successful in converting. The Chargers then capped a seven-play opening drive with a 5-yard touchdown run by Drew Bianco for the early 7-0 lead.
It was short-lived as Madison Central (3-0) rattled off 14 unanswered points to grab a 14-7 lead with more than nine minutes left in the second quarter.
The seesaw battle continued with Oxford knotting the game up 14-all when quarterback Jack Abraham hit Ken Presley on a 66-yard strike down the middle.
The Jaguars went into halftime up 20-14 after a late touchdown and failed extra point. Oxford kicker Liam Cooper missed a 36-yard field goal try with 10 seconds left in the half.
The real excitement occurred in the final two minutes of the game.
With Madison Central leading 31-21, the Chargers had a 10-play, 90-yard drive, which ended with Abraham hitting tight end Zach Cousar on a 10-yard touchdown pass. A converted two-point play, which saw Cousar complete a pass to Abraham in the end zone, got Oxford within two.
“We work on it every day in trick play period,” Abraham said. “Honestly when I went up, I thought it was about to get picked off. Usually it’s about 25 percent (completion rate in practice), but luckily it was a fun play. I’ve never even caught a pass in a game before.”
Oxford brought out the onside kick yet again and once again converted it successfully, giving the Chargers the ball in Madison Central territory with 1:19 to go. The trickeration is not an uncommon sight for those who have watched their fair share of Charger football.
“(Madison Central) gave us what I was looking for,” Hill said of the onside kicks. “We hit it a little farther than I thought, but it worked out good for us.”
The Chargers moved the ball and used up most of the clock, leaving only 13 seconds left when Yoste attempted and missed the field goal, giving Madison Central the ball and the victory.
Abraham finished the night completing 36 of 69 passes for 485 yards, a new single-game school passing record, and three touchdowns.
Wide receiver D.K. Metcalf struggled against the Jaguars’ defense, catching only four passes for 39 yards. With its top receiver having a down night, the rest of the potent Charger receiving corps stepped up with Cousar, Presley, Jimmy Greaser and Hiram Wadlington all contributing.
“D.K was getting double-teamed, and we had guys come up and make plays,” Abraham said. “Everybody is depending on D.K. to make plays, but we finally have the confidence to come in and make plays. They all stepped up and made plays, and that’s all you can ask for.”
Oxford now turns its attention to the annual Crosstown Classic against rival Lafayette. The Commodores are coming into the game 3-0 after their win over Grenada Friday night.