NOTEBOOK: No update on Tunsil’s status 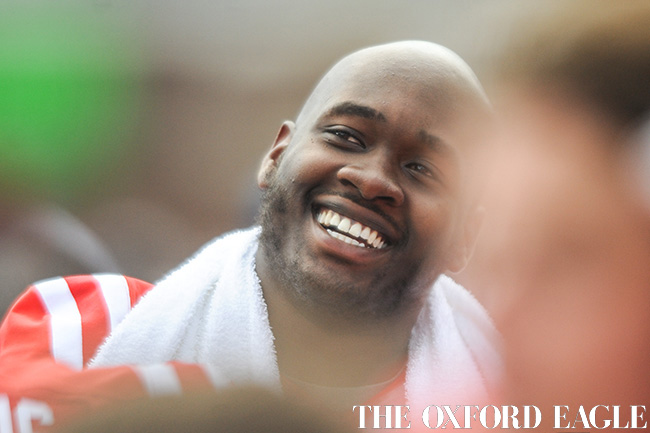 Monday marks the day Ole Miss coach Hugh Freeze speaks to members of the media in his weekly press conference.

Even though the No. 17-ranked Rebels disposed of UT-Martin with ease in their 76-3 win, the main topic on people’s mind was Laremy Tunsil’s situation.

The school announced less than an hour before Ole Miss’ season opener that the starting left tackle would sit out of the game to allow an NCAA investigation to play out.

Freeze said after Saturday’s game that he is “not privy” to that process, and not much had changed on that stance two days later.

“I know everyone is surprised, but the way these things go for me is that I am not really included in the behind-the-scenes things that are going on,” Freeze said. “That can be quite frustrating and make you anxious at times. But I am confident that our people and whatever process is going on that they are on top of it.”

It is unclear what the NCAA is looking into when it relates to Tunsil, though his stepfather, Linsdey Miller, made accusations of improper recruiting tactics this summer during the two’s domestic assault case that was later dropped.

Freeze was not encouraged that Tunsil would be back on Saturday for Fresno State (2:30 p.m., ESPN2). The next time Ole Miss might have him back on the field could come after an NCAA decision is made as Freeze is uneasy on playing him anytime before then.

“I don’t know,” Freeze said. “I’d have to feel very comfortable with that and know that our program wasn’t at risk. That would have to come from our administration above me.”

Special teams impress
Heading into Saturday’s game, one of Freeze’s big question marks was the play of new long snapper Will Few. Few is replacing longtime starter Will Denny at the position, and with a new man in charge of getting balls to the punter and field goal kicker, it had Freeze uneasy.

Few put those worries to bed as he did not have one botched snap the two times he sent one back to punter Will Gleeson.

“That was a little anxious for me,” Freeze said. “I don’t believe in being anxious for anything. It’s not always the easiest thing to fulfill for me. I’ve been spoiled. … He had two opportunities for some snaps, and they were good. The times were good. The PATs were good as well.”

After breaking his finger in the week leading up to the game, Carlos Davis still served as the Rebels punt returner on Saturday. Davis fielded six punts for 80 yards with his longest return going for 58.

“Carlos Davis, I told you you last year, I really felt that we really had something with him, and he gets hurt in fall camp. I think you saw on Saturday that he’s got a little something to him.”

Johnson to return
After missing the season opener as punishment for what Freeze called an “in-house issue,” senior linebacker C.J. Johnson is expected to make his season debut against Fresno State.

“No. 10 is ready to go. I know he’s ready to go,” Freeze said. “I thought he did a good job of leading on the sideline and helping teach some of the younger kids some of the adjustments they have to make.”

Freeze was not so clear on the status of safety C.J. Hampton, who missed the UT-Martin game for the same reasons as Johnson.