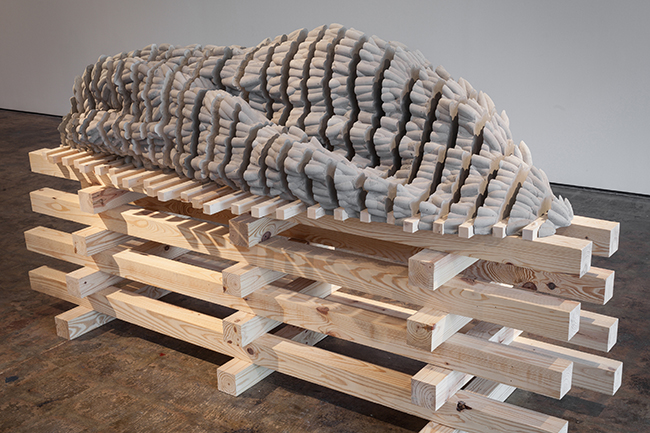 One of Butler’s concrete casting pieces was unveiled this week for “Intervals and Disturbances” at the University Museum.

The University of Mississippi Museum is unveiling its next exhibit, “Intervals and Disturbances,” this week.

The collection, which features the work of abstract sculptor Ben Butler, opened Tuesday and will be on display until Dec. 18.

An opening reception is set for today from 6-8 p.m. The reception coincides with the University Museum’s annual Membership Party.

Butler’s gallery of sophisticated sculptures features intricate woodworking and concrete casting that evokes growth, erosion, accumulation and dissection. The collection traces the emergence of complex phenomena in the natural world, and, as Butler puts it, through the scope and series of delicate processes.

“The questions in my studio and the things that I explore always have to do with process,” Butler said. “I’m interested in investigating how something comes into being. For example, I tend to see the natural work not as a series of objects but as pure process. Close observation reveals the processes. In the moment when you’re observing something, if you’re careful about observing it, it becomes clear that it is not a fixed thing. It’s a snapshot of an ongoing process of growth, decay, erosion, expansion, transformation or sometimes all those things at once.”

Butler has had an interest in art all his life. He attended Bowdoin College, a private, liberal arts school located in Maine. He started college ambitiously as an art and neuroscience double major. In college, he was able to find what he was more interested in within art, and eventually, he lost interest in science due to the rigors and tediousness of the curriculum, he said. Art proved to be the best vehicle for Butler to incorporate his vast array of interests, but science and an investigation of the scientific process have crept their way back into his work over the years.

“That’s something I still love about being an artist,” Butler said. “I can pursue different interests and study up on different things and pick and choose what I end up incorporating into my work.”

Butler’s gallery features pieces he designed in the past 10 years, while two pieces will be unveiled at the University Museum show. For this exhibit, Butler will introduce a full range of pieces to create a collection of objects that explore new opportunities and spaces.

“Most of the pieces are done within the last two years and have never been shown in the region. There are two pieces I just finished that were brought here on Monday (Sept. 7),” Butler said. “I knew for this show I wanted to assemble a collection of my most interesting objects. I usually respond directly to an exhibition space. This show is object based, as opposed to a site-specific installation, so I’m interested in how the selection of the sculptures and their placement can inform the conversations that they have with each other. I laid out where things would go and realized here’s a blank wall and opportunity to do a brand new piece that would be customized to fill that void.”

A family activity day will be held at the University Museum on Saturday, Nov. 14, from 10 a.m. to noon. The museum will have activities inspired by “Intervals and Disturbances.” The museum kicked off an Ignite Ole Miss campaign last spring to raise money to support free family days for three years. Museum supporters surpassed their goal by raising more than $6,000, and this fall they will host four family activity days for the community.

Marti Funke, University Museum collections manager, and Rebecca Phillips, University Museum coordinator for memberships, events and communications, both agreed that while Butler’s show will provide an educational benefit, it will also provide a variation to the normalcy of recent exhibits at the museum.

“Ben’s exhibit is so different than what we’ve typically showcased,” Phillips said. “You look at the exhibition postcard and really can’t tell exactly what it is. It’s exciting. I’ve been here for two years, and we’ve never had any large sculpture pieces. I’m excited to have new visitors and for all ages to enjoy Ben’s artwork.”

“It’s a single artist, rather than a compilation of works from several artists that compile a theme,” Funke said. “All of the work is so varied, but it ties together. You really do have several dramatic moments as you’re experiencing everything that is in the gallery. It’s done with fewer pieces than we normally have in an exhibition. They’re so multifaceted and interesting that there doesn’t need to be more. You’ll have plenty of interactions. Visually it looks different than anything we’ve had recently — possibly ever.”

Funke and Phillips said regular patrons of the museum and the community alike will be captivated and appreciative of Butler’s exhibit.

“I think people will be pleasantly surprised,” Funke said. “Our regular members are used to the permanent collection, and this just brings a whole other medium. It also brings an opportunity being in the round with the objects in a way that we usually don’t have. I think people will be surprised and excited about it.”

“We’re always trying to reach a younger audience,” Phillips said. “We’re a university museum and a lot of university students have not visited here. I think that having this modern exhibit will get college students in the door. Our members are familiar with seeing new artists, and I think it will challenge them in a good way.”