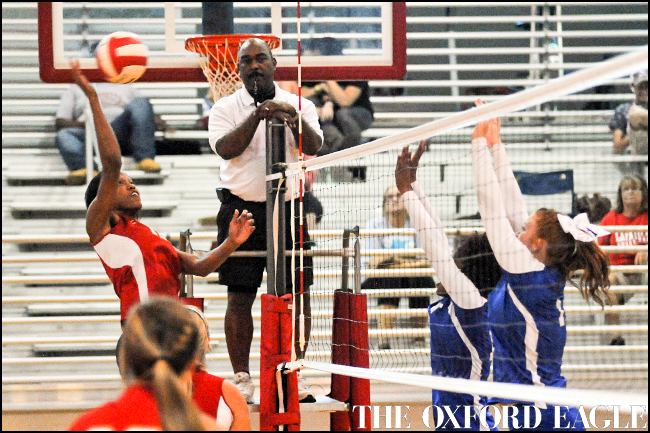 After three straight road matches, Lafayette was back home and hosted not one but two teams inside the LHS gym Thursday night. The Commodores played Choctaw County and Water Valley in a tri-match that saw Lafayette sweep their pair of matches.

After controlling the opening set and leading the entire way, Water Valley (9-2) responded well in the second frame, jumping out to a 15-11 lead midway through.

The Commodores did not panic and rattled off a 14-2 run to claim the set and the match. When Lafayette trailed, Jordan did not call a timeout to rally his team but instead chose to see if his team could respond to adversity on its own.

“With as many seniors as we have, it’s kind of time for them to take ownership,” Jordan said. “We’re moving toward the playoffs. There may be a night where I have to take two quick timeouts, and they’ve got to come out of a hole on their own. You pick and choose times during the year to check your team, and I kind of did that tonight.”

Blue Devils stumble
Water Valley saw itself on the losing end of a match for the first time this season, losing a three-set affair to Choctaw, 2-1 (14-25, 25-23, 8-15), before its match with Lafayette.

Blue Devils coach Casey Clouse wanted to face Choctaw after being eliminated by them in last year’s playoffs. She wanted to see where her team stood against a playoff-caliber team and liked what she saw in defeat.

After being up in the first set, Water Valley gave up the lead, dropping the opening set to Choctaw. The Blue Devils were down 14-20 in the second set but used an 11-3 rally to force a deciding third set.

“The second set, we looked how we normally look,” Clouse said. “I was pleased with them the second game. The first game, I thought they were a little slow starting. … It was some of the better competition we’ve seen, and I think it did nothing but made my girls better.”

Water Valley is off to one of its best starts under Clouse, who was optimistic about her team heading into the year. The results on the court have backed up her expectations.

“I feel like they are doing really well, and it’s best I’ve seen Water Valley look since I’ve been here,” Clouse said. “The girls are playing really well. We wanted to come here and face bigger schools to get us ready for the playoffs.”

MORE OF THE SAME: Commodores expect ‘playoff’ atmosphere at…