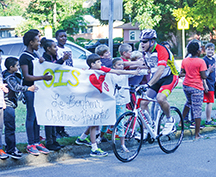 Jim Jaggers rides past cheering Oxford Intermediate School students during the Go Jim Go fundraiser to benefit LeBonheur Children’s Hospital on Friday. Students raised over $3,000 to donate through a coin collection from Sept.1-14.

Jim Jaggers is peddling his way to helping children in Mississippi. His “Go Jim Go!” fundraiser for Le Bonheur Children’s Hospital in Jackson made its way through Oxford Friday and the bicyclist was met by hundreds of Oxford Intermediate School children and faculty, as well as a $3,000 check.

OIS 5th grade Social Studies teacher Cynthia Howle, met Jaggers at the Oxford YMCA and rode with him to OIS.

The two winning OIS classes will be treated to a pizza party sponsored by the OIS Renaissance Committee.

“This is just one event that the OIS Renaissance committee is sponsoring at OIS this year,” Howle added. “Not only do we promote student achievement, but we try to motivate students to work hard and become good citizens.”

Grace Orman is back in school after a rewarding summer at work. The 21-year-old has been a lifeguard for the... read more