OUT IN THE MIDDLE: Defense takes another blow with Johnson’s injury 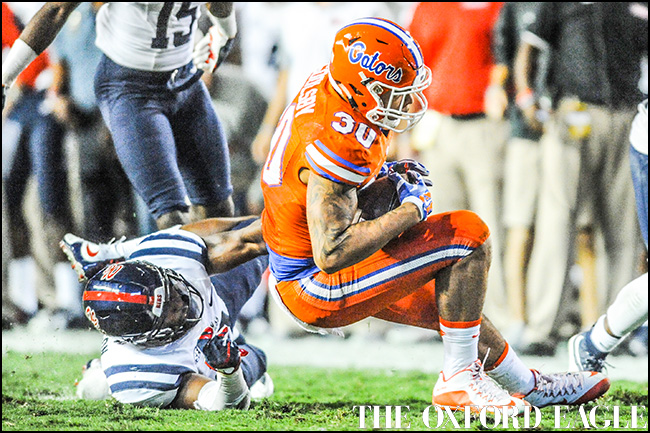 A day removed from giving the secondary a makeover, the Ole Miss defense has to now move players around at linebacker.

Senior C.J. Johnson is expected to be out four to six weeks after having surgery to repair a meniscus on Tuesday, the school announced.

The news broke after Johnson revealed the procedure needing to take place with a Facebook post on his personal page.

“The best thing I love about playing sports is that it challenges your guts and determination,” part of Johnson’s post read. “When the game knocked you down, you get up and keep fighting.”

It is the second meniscus injury the 13th-ranked Rebels (4-1) have dealt with this season. Safety Tony Conner, who head coach Hugh Freeze said is beginning rehab this week, suffered a similar injury against Alabama, causing the secondary to be shifted around in his absence.

“It happens,” defensive coordinator Dave Wommack said after practice Tuesday. “You lose an Issac Gross, a Tony (Conner) and C.J. It’s tough but next guy’s got to step up. I think we will.”

Caldwell has played in every game and got about 30 snaps against Florida last week after becoming Johnson’s backup a couple weeks ago. He has eight total tackles with six being solo tackles as well as one forced fumble that occurred during the Alabama game.

Caldwell had been playing Stinger during spring practice, then Wommack moved him to backup Mike linebacker during the summer before fall camp began.

“C.J. Johnson is a phenomenal player, and I have big shoes to fill,” Caldwell said. “Being second behind him this season has influenced me a lot, helped me a lot. … Hopefully I can bring that forward on the game Saturday.”

The transition from Stinger to the middle took some adjusting over the course of fall camp, but the former Northwest Mississippi CC Ranger has made large strides over the past two weeks, which was perfect timing given the Rebels’ current situation.

“I feel a lot more comfortable with the defense,” Caldwell said. “The athleticism was there, the talent was there. The tools were there with coach Wommack, who’s a phenomenal coach and defensive coordinator, and it’s great to have him to go and ask questions. … I’m moving a lot faster and reading a lot faster.”

Backing up Caldwell will be senior Christian Russell, who has played four games and started one with 12 tackles on the season, including 2.5 for loss.

All the new pieces in the defense have a chance to get their feet wet against a non-conference opponent in the winless Aggies (0-4).

New Mexico State’s starting quarterback Tyler Rogers is out of Saturday’s contest after suffering a broken thumb on his throwing hand, which will need surgery.

Redshirt freshman Nick Jeanty is listed as the starting quarterback on the Aggies’ depth chart. Jeanty has attempted four passes with no completions and thrown one interception in his one game played.