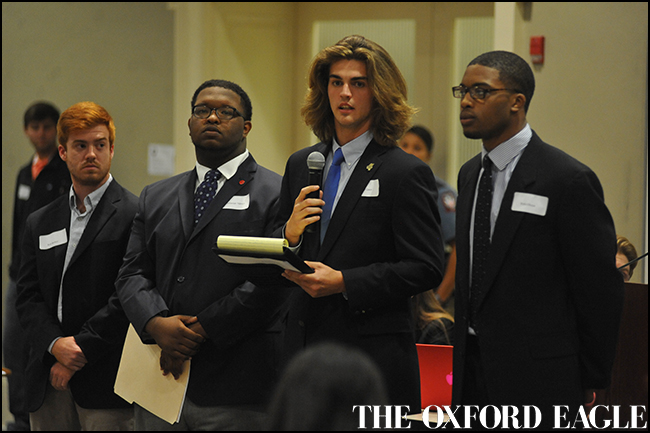 Associated Student Body senator Allen Coon, center, who introduced a resolution calling on the University of Mississippi to remove the Mississippi state flag from campus, speaks at Bryant Hall on campus in Oxford, Miss. on Tuesday, October 20, 2015.

The University of Mississippi Associated Student Body said it wants the Mississippi flag removed from campus.

ASB went into session at 7 p.m. Tuesday in Bryant Hall and announced the decision immediately following the vote around 9:35 p.m. A resoution passed 33-15 with one abstaining voter.

“We are stepping up for what we want to see in our state,” Student Body Vice President John Brahan said.

Brahan said the ASB has a chance to make a change for good within the state of Mississippi. Even though the ASB’s vote will not take down the flag, he hopes the influence will be communicated to others on campus as a sign of progression.

The Executive Committee of the Faculty Senate will sender the resolution in a meeting in Bryant Hall room 209 at 7 p.m. Thursday.

The ASB’s next action will be to reach out to university faculty and staff for support.

Ultimately, senior university officials and Acting Chancellor Morris Stocks will have the final decision on whether or not the flag will come down.

If Stocks agrees with ASB, Ole Miss will be the fourth Mississippi college to remove the flag from campus.

Student senators and a few legislative aids spoke up Tuesday, with views on each side of the coin. Some reasons given were more soft-spoken than others, but all students spoke to represent the state of Mississippi and students at large.

Sen. Allen Coon, author of the resolution, said he wanted the flag taken down because of the division it caused on campus. It was unfair for oppressive symbols to be flown over students who could not identify with it, he said.

He said he hoped when and if the state flag was taken down, it sent a clear message to the rest of the state that students and residents of Mississippi were ready for a positive change.

Several senators voiced concern that the resolution, if passed, would insult state legislators and alumni rather than inspire them to regard it as a progressive attitude.

If it angered legislators or alumni to the point where they refused to give funds to Ole Miss, Coon said he did not care if they stopped giving.

An amendment was passed during the session to change wording that made various senators feel it was “disrespectful” to the state. It was modified to refer to the “symbol in question.”

After ASB had been in session for over two hours, a short recess was taken. When senators came back, it was nearing time to make a decision.

Sen. Saxon Nelson declared that he came with a heavy heart that was torn between what he thought was right and how he felt. During recess, he came to the conclusion he was leaning toward voting no for the wrong reasons. He changed his stance and announced he was in favor.

After the vote passed, students gathered in front of Bryant Hall to discuss the outcome.

“It just makes me feel like this campus is on to progressive change,” Shelby Whynn, a junior from Starkville, said.

Whynn said she thinks the voter turnout represents changing attitudes in the state.

“It’s now going to be inclusive of everyone’s heritage and not just one,” she said.

Prior to Tuesday’s vote, student lead protests from the university branch of the NAACP were held last Friday calling for the removal of the state flag from campus.