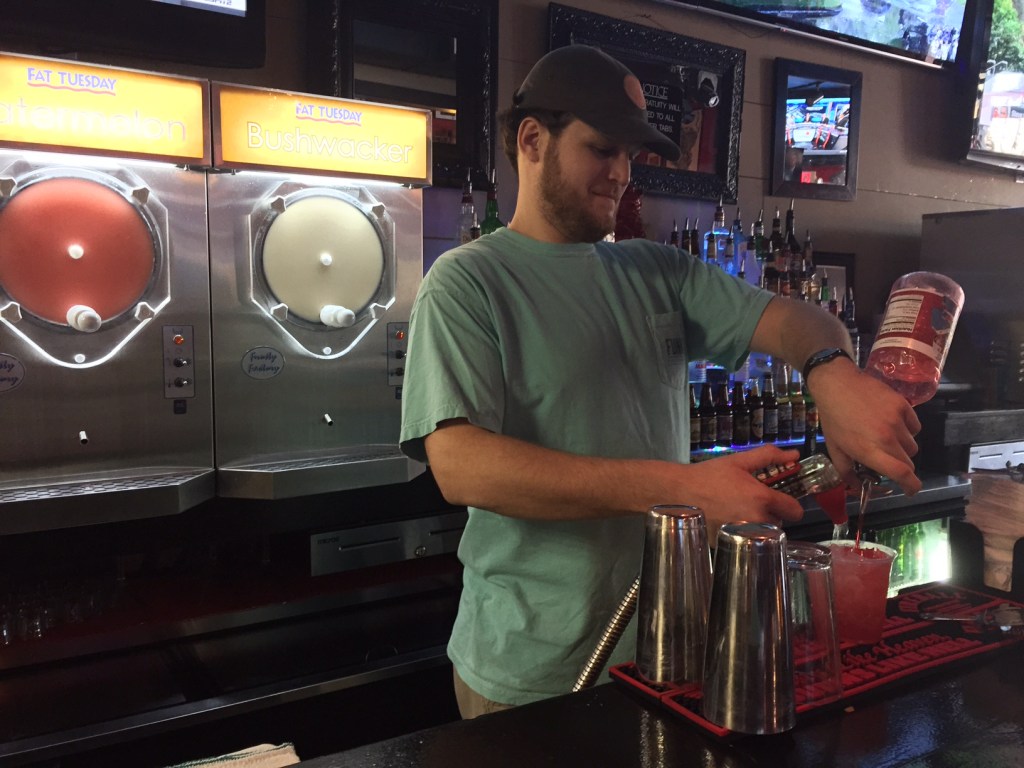 Submitted Photo Cole Whitney, a bartender at Funky’s in Oxford, pours a drink. The bar is one of the nation’s top rated, according to Buzzfeed.

One of the nation’s top-rated bars — recently named No. 25 by Buzzfeed — is located in Oxford.

Funky’s Pizza & Daiquiri Bar strives to give students a college experience unlike any other.

Funky’s bartender Cole Whitney said it’s a place with a lot to offer.

“There is always great music being played,” he said, “and you’re always in great company. The atmosphere is chill, but also wild and exciting, plus you can’t beat the daiquiris and the pizza.”

Funky’s was recently featured in Buzzfeed’s article about the top bars in the country. That may be because singer Katy Perry visited the establishment last year after the Alabama game. Perry also created a signature daiquiri drink at Funky’s named after herself.

Perry may have been the first celebrity to create a drink at Funky’s, but she’s not the only celebrity with a drink named after them. They also sell the Taylor Swift and the Miley Cyrus.

“I’d say the Miley Cyrus sells more than any other daiquiri because of the name, and it’s also the strongest one,” said Whitney. “It looks like a rainbow when it’s all put together, and I think a lot of people like that.”

Funky’s offers a wide range of daiquiris, but it’s also known for its pizza.

“Our pizza is so well-liked because of the thin crust and the fact that we make everything from scratch,” Whitney said. “It’s all homemade, and it’s always fresh.”

Funky’s also has unique decor. “The artwork is mainly a collection of random things the owner has collected throughout the years,” Whitney said, “like the giant moose head and simpler items, such as paintings.”

Some items have been specially ordered, like the featured Katy Perry jersey.

Another way Funky’s sets itself apart is by hosting parties during the holiday season.

“We do a Halloween costume party each year with a cash prize for the best costume I believe, and we also host a Christmas party each year,” Whitney said.

Corey Willis, a pizza chef at Funky’s, said parties and events hosted by the restaurant are posted on social media.

“We have a Twitter that constantly updates people on the deals for the day, and that brings in a lot of our customers,” Willis said. “There is also an Instagram and Facebook page.”

Oldies night is a popular event at Funky’s. A DJ plays oldies music the whole night, and a large dance party forms.

“Oldies night definitely creates a more crowded bar,” said Willis. “There’s a fog machine and all kinds of lights. It’s crazy, and the people love it.”

Funky’s merchandise, daiquiris, and pizza help the business maintain its spot on the list as one of the nation’s best bars. Recent renovations have improved Funky’s appearance.

“The two new daiquiri machines and new sound system have definitely drawn more people in,” said Willis. “New lighting was also added, and the new improvements give it a more updated look.”

This bar appeals to many types of people for many reasons. The atmosphere, variety of music, and drink choice draw in people of all ages, but specifically college kids.

“It’s a very young scene with a lot of daiquiris that kids like,” Willis said.