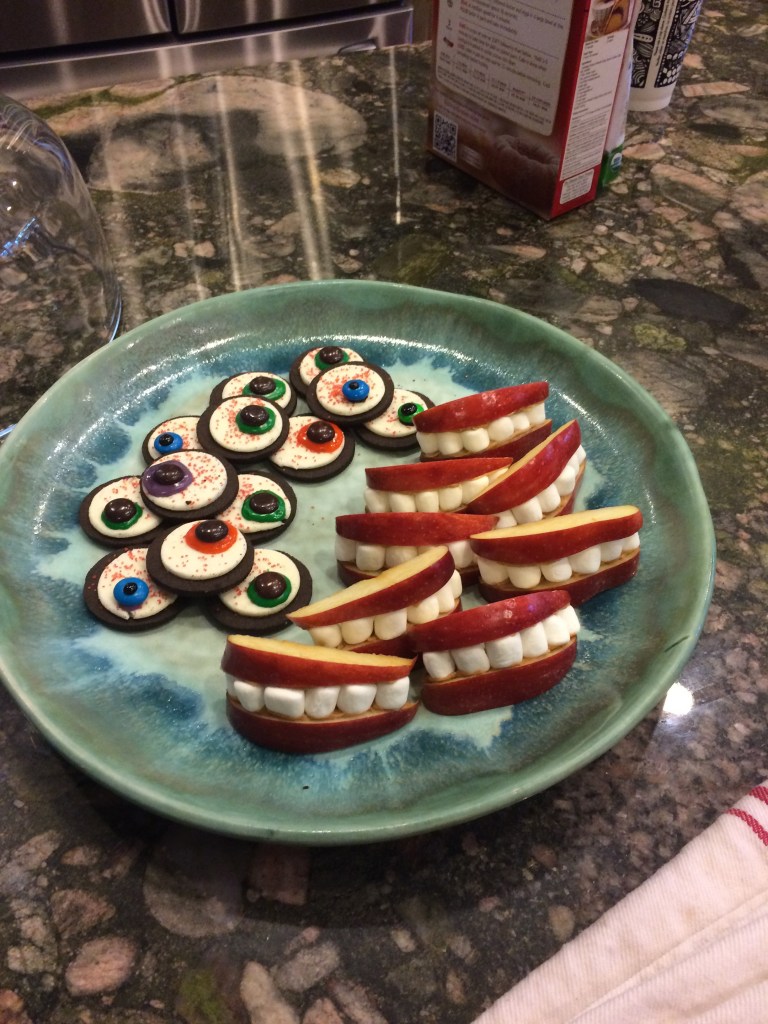 What time does trick or treating start and end tonight?

Bridgett Taylor Green fondly recalls her first cooking memory. She was 6, and it involved her mother, buttermilk cornbread and The Beatles.

“I sat on the counter top,” she said. “‘Hey Jude’ was on the record player, and she let me put in all the ingredients and mix it up

“She didn’t measure any ingredients. She would just toss stuff in until it looked right. And it was always fabulous. We always wore aprons when we cooked.”

Today, Green, 38, who just earned certification as a family nurse practitioner from the University of Alabama at Birmingham, still wears an apron her granny made when she cooks. Lately, she’s been focused on scary Halloween treats for her son, Cooper, 13, and daughter, Swayzie, 10.

“I have always loved the holidays, but Halloween in particular,” she said. “As a kid, it meant that I could be anyone or anything I wanted, even if for just one day. What kid doesn’t like dressing up and play-acting?

“I do it now because I love making memories with my kids. They’re the reasons I make such a fuss and decorate every inch of the house. I want them to have happy childhood memories, always know where home is, and remember me when I’m gone.”

Green begins prepping for Halloween in August. The kids help her plan recipes.

“I love to watch their faces light up,” she said.

Many of her ideas come from Pinterest or Southern Living magazine.

“Don’t be afraid,” she said. “Ha….see what I did there? Include the whole family. It’s a fun way to get everyone involved. Food is very forgiving and, even if it doesn’t look exactly like you want, it will still taste great and give you something to talk to your kids about.”

Green said she and her children always dress up at Halloween. This year, Cooper will be a zombie. Swayzie will be an Egyptian princess. She and her husband, Graham Green, will likely become Fred and Wilma Flintstone.

Instructions: Separate Oreos and use half of the cookie with the cream filling. Save the other cookie half. Apply red sprinkles to the white cream to resemble bloodshot eyes. Apply a dime-size glob of icing, which will be the iris. Place a brown M&M on the icing to make the pupil. “Place them on a McCarty Pottery tray, and you have very sophisticated Zombie eyes,” Green said.

Ingredients: Hot dogs. Candy eyes and mustaches found in the baking aisle at Kroger. You’ll “glue” them to the hot dog with mustard after baking. Crescent rolls.

Instructions: Cut the crescent rolls into thin strips, and wrap the hot dog, making sure to expose some of the hot dog along the way. Bake about eight minutes at 350 degrees. Once cooled, place a dot of mustard on the back of each candy eye and mustache to “glue” them in place.

“I’m making them because the kids get so excited to come home and see what I have made that day,” she said. “I love talking to them about their day while they have a homemade snack.”