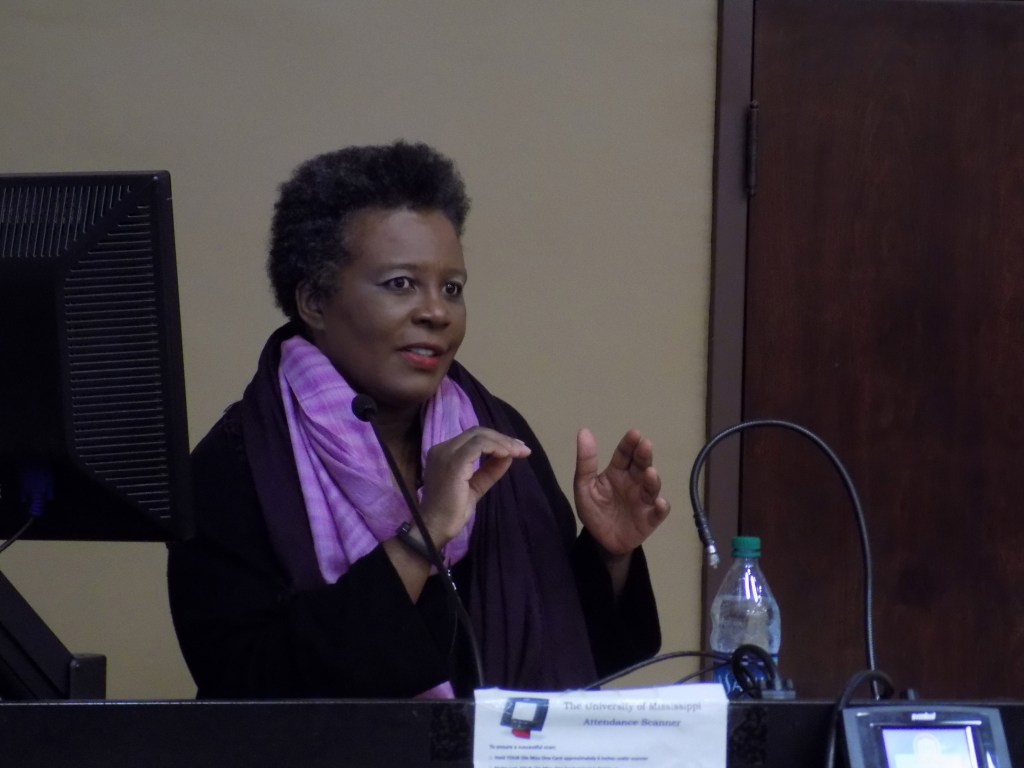 Award-winning poet Claudia Rankine read from her book of poetry titled “Citizen” this week at the University of Mississippi.

The University of Mississippi’s masters of fine arts program hosted a poetry reading in Brevard Hall on Wednesday night as part of a series of writers for students to enjoy.

“The desire was to write into those moments that I was connecting with, but also to write into them in a way that made space for what felt like my own consciousness, my own issues, my own way of navigating the world,” Rankine said.

Rankine sat at the front of the classroom and read aloud.

She supplied the class with visual aids she adapted from her book illustrations and some she thought would be important to certain poems.

“I think hearing a writer read her work aloud always adds another dimension to the poems,” Maggie Woodward said. “Especially in the case of ‘Citizen,’ which is clearly so deeply personal to Claudia Rankine, I felt really grateful to hear her words in her own voice.”

Woodward is a second-year MFA English student in poetry. I am from Owensboro, Kentucky. She started reading Rankine’s book “Citizen” for the first time in an airport.

“I started reading ‘Citizen’ for the first time in an airport, which was a really remarkable experience,” she said. “It felt like the world of the book was unfolding in so many interactions around me and I wanted to read it aloud to everyone.”

Since them Woodward has read a little bit Rankine’s works and as part of one of her graduate seminars this semester. They read both “Don’t Let Me Be Lonely” and “Citizen.”

She also wrote “Don’t Let Me Be Lonely: An American Lyric” in 2004 and “Nothing in Nature is Private in 1994, which won the Cleveland State Poetry Prize.

Rankine was awarded fellowships from the Academy of American Poets, the National Endowment for the Arts and the Lannan Foundation.

She was elected as a chancellor of the Academy of American Poets.

Additionally,  she received a Lannan Literary Award in 2014.

“As an MFA student, I’m pretty invested in the poetry world, and Claudia Rankine has kind of taken that world by storm in the past couple years. It is such a gift that she came to read here,” Woodward said. “Rankine is writing things that need to be read and re-read and talked about as much as possible.”