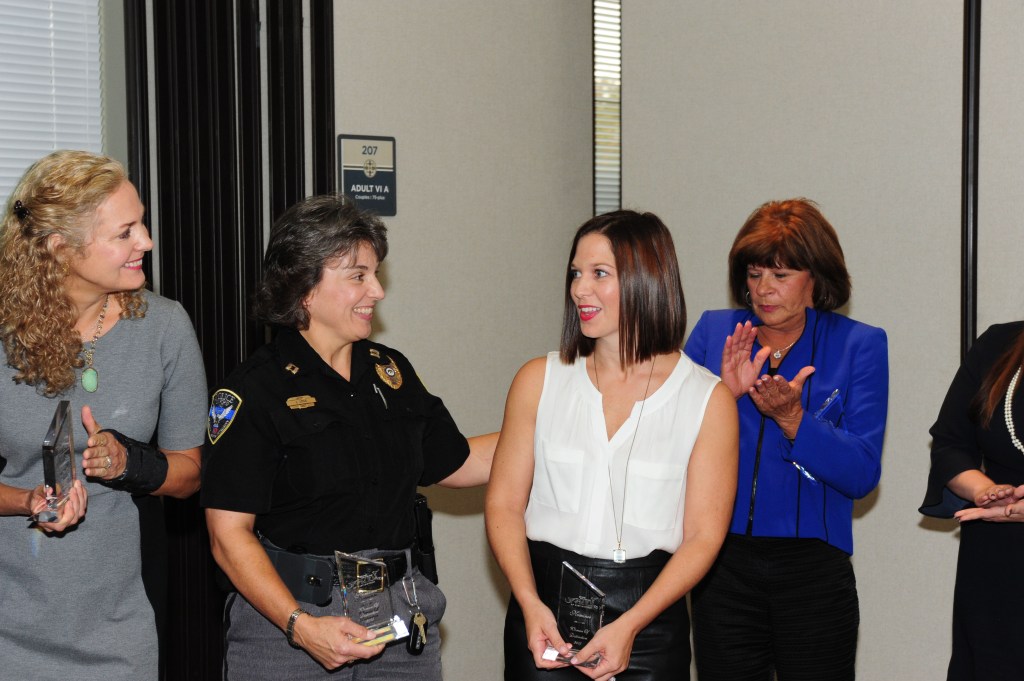 Mary Leary, left, and Libby Lytle, center, congratulate Betsy Smith after Smith was named recipient of the Woman of the Year award at the Women of Distinction luncheon held at First Baptist Church.

Ten women from the Oxford community were singled out Wednesday for their character and service to the community, and one, Betsy Smith, took home top honors.

Girl Scouts Heart of the South held its fifth annual Women of Distinction luncheon to spotlight women and their efforts at First Baptist Church.

Smith, owner of the local McDonalds, gives back through her business, donating funds to nonprofits, meal cards to children in the schools and serves on several boards of directors in the community. She was recognized in 2013-14 as a school parent of the year and is also involved in her church. Smith was named the top Woman of Distinction.

Gail Pittman, founder and president of the well-known tableware and home accessories company that bears her name, was the keynote speaker. She not only encouraged and uplifted the women being awarded, but also gave a nod to those in the audience.

“Everyone in this room is a person of distinction, but you ladies have been honored today,” she said. “For whatever reason you’ve done what you’ve done … you’ve touched other people’s lives.”

Other women nominated include:

• Allyson Best, current associate director of technology management in the Office of Research at the University of Mississippi, has served with the Chamber of Commerce, Oxford School District, her church and is a host family for UM students.

• Carolyn Carter, a Girl Scout herself as a child, founded Project Lifesaver for the Oxford and Lafayette County area, operated Elliott Jewelers, taught school with honors, wrote an encouraging book and is involved in church.

• Marcia Cole, an academic adviser for UM, has been involved with the Oxford school system, has been a chaplain for the hospital and served with United Way. She is also involved with the Literacy Council, Food Pantry, Leadership Lafayette, Habitat for Humanity, Doors of Hope and serves as an associate minister at her church.

• Sherri Delashmit oversees work in the Heart Care Center at the hospital, helped spearhead the opening of the Baptist HealthPlex, helped with whatever health awareness causes possible at various nonprofits and has donated more than 10 gallons of blood and platelets.

• Peggie Gillom-Ganderson has been a high school and college basketball standout, eventually playing in the WNBA. She retired from coaching to become the Fellowship of Christian Athletes’ women’s chaplain in 2009, and is focused on Christ every step of the way in her involvement at the North Mississippi Regional Center and the Graceland Convalescent Center.

• Mary Leary brought an idea to Oxford and founded Lovepacks. She helped get the 501(c)3 nonprofit status, served as president, and has overseen 16,000 love packs going to needy area children. She’s also a youth leader at her church.

• Libby Lytle, a captain with the Oxford Police Department, teaches a self-defense class to women of the community from housewives to young professionals to college students. She also founded Mississippi Women’s Law Enforcement Association and is active in the community with violence prevention efforts.

• Sherry Wall graduated with honors from UM and answered a calling by friends by running and being elected to the county school board and then the chancery clerk position. She is involved in Rotary Club, LOFT, United Way, the state chancery clerk association and the Domestic Violence Center.

• Janet Wilkins, the CFO and general counsel for Charter Road Hospitality, uses her law and taxation degrees to not only run a business, but also to be the legal adviser to Mississippi Beta Chapter of Pi Beta Phi’s House Corporation.

“Every person in this room is on a journey. Every person’s life connects to someone else’s,” Pittman said. “We are responsible for that, and when you leave this room, even if your name isn’t on this list of honorees, you need to know how very important you are to this world we live in.”

Pittman also talked about how her business all began when she was walking through a store one day with her children, saw a neat-looking bowl and decided she wanted to paint one of her own. She said no matter where we think we are going with our lives, God is in control and puts us where we are meant to be to make the impacts we ultimately make.