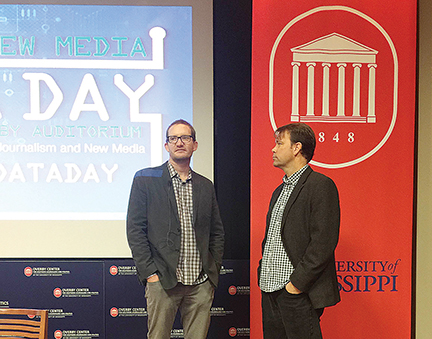 “You hear so much about big data and all the innovative ways that companies are using data,” said Scott Fiene, program director and assistant professor of integrated marketing communications at the University of Mississippi.

“That’s what we’re here to hear more about today,” he said. “The speakers we’ve got are not only from organizations you’ve heard of and are familiar with, but their backgrounds are in journalism, writing, PR and advertising.”

Eric Schnabel, director of North American Creative Shop for Facebook, and Sean Callaghan, senior manager of content for LinkedIn, were the featured speakers.

After two decades of working in advertising and journalism, Schnabel joined Facebook in 2011. He leads a team of creative strategists who implement ideas that shape how the world’s largest marketers use Facebook and Instagram to drive business growth.

“There’s been a proliferation of smartphones, and that’s changed the way that we capture our moments and the way that we consume content,” Schnabel said during the event. “What that has created is an unbelievable opportunity for storytellers … the ability to work across platforms, to know who your audience is.”

“The message to storytellers in the room who might not think data is relevant to them — data is everything to you,” he said.

He said data helps serve up content that is more relevant.

“That causes the first shift in media consumption that we’ve seen in half a century,” said Schnabel. “That’s where data and creativity come together — by taking the things that we know about people, taking the things we love and serving them content.”

Callahan, a former marketing director, editor and reporter at Crain Communications, is the co-author of The Big Data-Driven Business, a book that discusses what it takes to create a thriving business culture focused on analyzing data and acting on that information.

“It really helps you give them a message that you want to hear,” he said.

Callahan said 90 percent of the existing data has been created in the past two years.

He said the Obama campaign was able to raise an extra $60 million by figuring out which version of their website worked best and drove the most emails.

“It’s about getting a great idea and honing it so that it works much better,” he said.

Callahan said new mobile devices have created a content boom so humans use data-driven feeds to sort through the clutter.

He said the ability to use data to find audiences has sparked an explosion of creativity for storytellers.

Walk for Diabetes set for Sunday