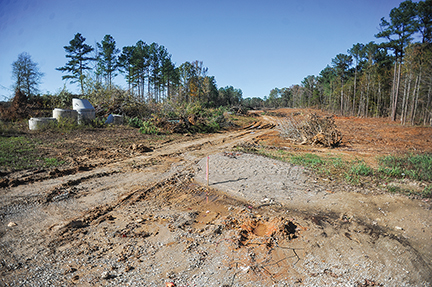 Lafayette County leaders tabled Twelve Oaks Phase IV after the developer could not place an additional bond on the paving project before last week’s Board of Supervisors meeting.

Developer Billy Westbrook told the planning commission the week before he would have the bond in place as the commission approved allowing the preliminary and final site approval contingent upon the bond being in place.

Westbrook decided he wanted 10 lots instead of 12 on the development.

“I’ve asked him to place an additional bond on this because this is part of the road we need as soon as he gets this done,” county engineer Larry Britt said. “There’s no reason not to finish paving out there. I’ve had that discussion several times now to not let him pave this entrance until he’s through constructing and tear it up. The next phase can be accessed off College Hill.”

County attorney David O’Donnell recommended tabling the issue until the bond is filed.

Phase II of the Twelve Oaks project  did get approval from the supervisors after the recommendation from the planning commission to do so. The project includes  Atlanta Avenue, which runs along College Hill.

“We’ve had several different layouts that have been proposed,” Britt said. “The planning commission’s biggest issue has been all along  10 or 12 accesses or driveways onto College Hill Road.”

The new layout builds the road parallel to College Hill, according to Britt, and all of the houses access onto Atlanta Avenue.

“There is a statement on the plat that they cannot access off of College Hill,” Britt said.

The rear of the homes will face College Hill and the drive ways will only access onto Atlanta Avenue, according to planning commission chairman T.J. Ray

Britt said the county was concerned with safety and access to College Hill.

“You’ve got Tera there and all the traffic coming out of Twelve Oaks and another road that comes in by that nursery,” Britt said.

The supervisors did approve the preliminary site plan.