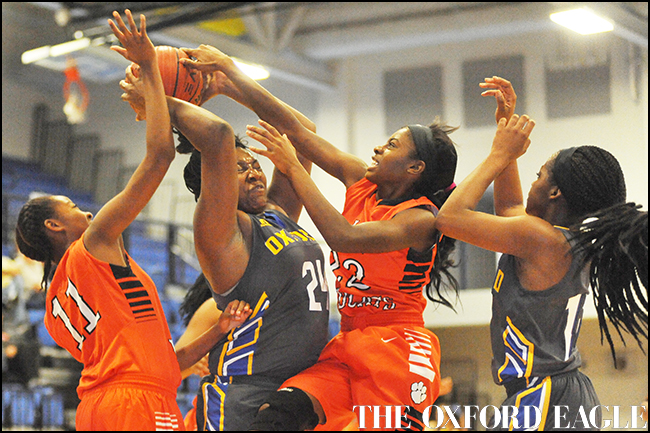 It took a while, but the last second finally ticked off the clock.

And Cliff Ormon had his first win as Oxford’s girls basketball coach.

In a game that took nearly two hours, the Chargers outlasted Calhoun City in a physical contest for a 63-48 season-opening win at the Oxford High gymnasium Tuesday. It was Ormon’s coaching debut at Oxford after being hired to replace Shayne Linzy after two seasons at Ripley.

“I told Mr. (Oxford School District Superintendent Brian) Harvey and Mr. (Oxford High Principal Bradley) Roberson I wish I was getting paid by the hour,” Ormon joked afterward. “As long as this one was, I would’ve gotten a little bit more money in my pocket. But I was proud of the win.”

The teams combined for 45 fouls with Oxford (1-0) being whistled for 27 of them. The tightly called game forced the Chargers to back away from the constant full-court pressure Ormon’s teams usually thrive on in order to get through it with their best players on the court.

Senior forward Kyla Malone scored 12 points before fouling out late. Four other Chargers finished with four fouls, but Oxford cashed in its own opportunities at the free-throw line and operated its offense with enough efficiency that Calhoun City couldn’t keep up.

Maggee Hobson finished with a game-high 27 points while Emma Schultz added nine for the Chargers, who led 23-12 after the first quarter and rarely relinquished the double-digit lead the rest of the way. Oxford finished 15 of 19 at the free-throw line.

“After the first quarter, it was never a flow that you could really appreciate the game as far as the way it was played,” Ormon said. “I was proud of the way our kids continued to battle, and we found a way to win.”

Sagging back in a traditional half-court defense only made the foul situation worse as Oxford struggled to stay in front of the quick Wildcats and did “a lot of reaching,” Ormon said. But the Chargers’ 11-player rotation helped spread the high foul total out.

“I’ve been telling them all year, you may think you’re the sixth, seventh, eighth, ninth or 10th girl, and they all played tonight” Ormon said. “We needed the whole bench to get in and contribute. Proud to see some of those girls. They’re going to have to grow up, and it started the first game.”

Chargers hang on
Oxford’s boys built a double-digit lead then held off a furious fourth-quarter rally by Calhoun City to hold on for a 72-67 win in Tuesday’s nightcap.

“I felt like we weathered the storm definitely,” Oxford coach Drew Tyler said.

Jarkel Joiner scored 22 points to lead Oxford (1-0), which was breaking in four new starters. The Chargers also got 10 points from Cole Cromwell, 13 from Terry Williams and 20 from Christopher

Sandroni, who knocked down five of Oxford’s 10 3-pointers, two of which came on back-to-back possessions to give the Chargers a 62-50 lead heading into the fourth quarter.

Calhoun City, behind 24 points apiece from Tyius Jennings and Ladavius Draine, cut the deficit to two with a little more than a minute left, but Joiner answered with a jumper to make it a two-possession game again. Oxford went just 10 of 22 on free throws, but four of them came from Joiner, Williams and Sandroni in the final minute to seal the victory.

“Our guys said, ‘Hey coach, let’s go to Jarkel. Let’s go to Terry,’” Tyler said. “Because they’re going to handle it and secure it, and that’s what we did. Therefore our team knows our strengths. They know where the ball is supposed to be in those type of times.”