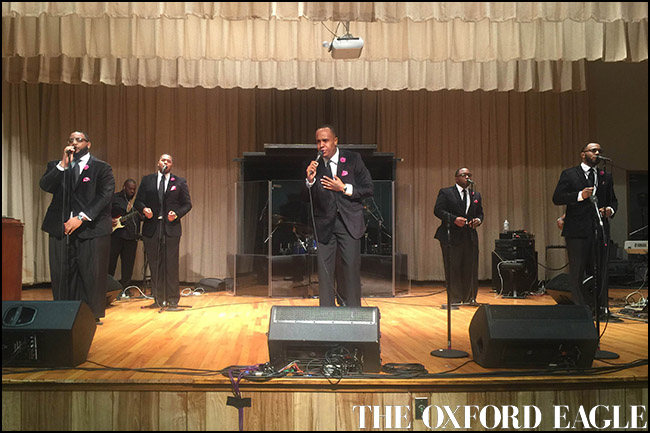 LAREECA RUCKER Tony Bush and Tha Deacs perform Saturday night at the Civic Center in Water Valley. The Nashville musician, who has local ties to Water Valley, recorded a live album of the event.

The Water Valley community is still buzzing about a weekend event that brought the red carpet out in town.

The Civic Center was alive with praise Saturday night when a Nashville performer with local ties performed during a live studio recording.

Tony Bush and Tha Deacs were the featured performers after an introduction by Cedric King.

“We’re here to witness history in the making — the first live recording for Brother Tony Bush,” King said. “I’m sure everybody who’s in Water Valley and the area can really appreciate this production being in Water Valley.”

Nashville native Antonio Bush, 27, grew up studying musicians from the front row of his church.

Bush never had formal drum lessons, but learned to play by ear.

“My earliest memory, at the age of 5, I begin playing drums making $100 a Sunday,” he said. “My Granny bought me my first drum set.”

Bush’s mother and grandmother supported his music, and he became a sought-after drummer, who has played with many artists in different musical genres.

“After school, I began to travel and do music full time,” he said. “I’ve been blessed to travel/play for Kurt Carr, James Fortune, The Williams Singers, Vicki Yohe and others. I was blessed to tour with Wess Morgan, pastor Tim Rogers and the Fellas.”

Bush said he now tours with Harvey Watkins Jr. and The Canton Spirituals.

“I come from music,” he said. “It was pretty much bestowed in me. However, my passion for it came natural.

“My biggest inspiration is AyRon Lewis and James Hodges. These two men took me under their wing and nurtured me.

Bush said his first professional performance was in November 2013.

“I was very nervous, as I was only use to playing bass and drums or singing background vocals,” he said. “After this night, I felt like I could accomplish anything as an artist.”

Bush, who has been performing professionally for more than a decade as a musician and two years as an artist, said his first tour was with Wes Morgan, an American gospel musician and pastor.

“We traveled all over, doing what we love,” he said.

“My wife, Monique Townes-Bush, is originally from Water Valley,” he said. “I’ve done many things in the city of Nashville. I wanted to bring this to her hometown.”

Bush said the album title hasn’t been decided. He also released a mix-tape Saturday night for $10.

“I want to just please God, being the best musician, singer, and preacher that He has called me to be,” he said. “I know God has a plan for my music to reach the nations. I’m just following Him.”

“Either I’ve been through it, or I’m coming out,” he said. “It’s how I respond to trials and tribulations, encouraging the next person by letting them know they can make it.”

“Never stop believing, never stop dreaming. After this night, I want everyone — not just singers and musicians — but everyone to get back to it, whatever it is.”