DOING IT ALL: Metcalf’s big night helps send Chargers to North Half 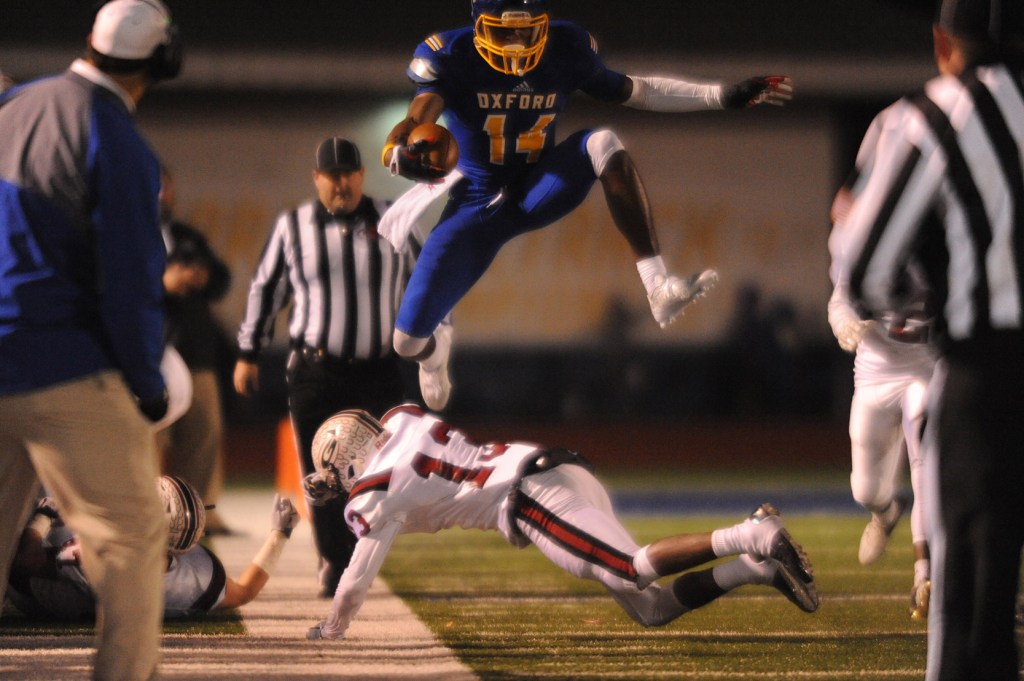 Two of the best players on the field came up big for their respective teams.

The two were near each other all night, and after nearly 46 minutes, the teams’ postseason lives rested on their shoulders Friday night at Bobby Holcomb Field.

After catching his fourth touchdown to put Oxford ahead, Metcalf snagged a deep pass by Germantown quarterback Michael Allen with eight seconds remaining, sealing the 40-33 win for the Chargers (11-2). The win earned Oxford a trip to their third consecutive MHSAA Class 5A North Half title game this week where it will host West Point.

How the game arrived at its final score involved Oxford feeling they had won the game, then lost it, then won it again all in the final three minutes.

It was expected to be a shootout as both Oxford and Germantown averaged more than 35 points a game heading into Friday’s contest.

It took a couple possessions, but the offenses did not disappoint the crowd, combining for 73 points.

Oxford’s defense knew it had to improve from how it played in the previous week’s first-round game against Vicksburg. Coach Johnny Hill wanted to see more attacking rather than chasing from his tacklers. He saw just that in the first three Germantown possessions.

The Mavericks had a turnover on downs, a punt and a fumble that Oxford recovered. The stout play to start the game may have cost Hill his trademark look.

“I’ve got to shave my mustache,” Hill said, smiling. “I told (the defense) the first three-and-out they could shave it. So when I go in there, they’re going to cut it off.”

The Mavericks (9-4) found the scoreboard on their fourth drive with a 5-yard run by Nic Patterson, cutting Oxford’s lead to 13-7 early in the second quarter.

Oxford responded quickly, marching 75 yards on three plays with the final pass being an 8-yard strike from Jack Abraham to Ken Presley to make it 19-7 after a blocked point-after.

The back-and-forth continued with Germantown scoring 10 unanswered points to make it a two-point game before Abraham hit Metcalf for a 15-yard touchdown. Oxford took a 25-20 lead into halftime after another Mavericks field goal.

“We needed it,” Metcalf said of the see-saw scoring. “The past two, three years, we’ve been beating teams bad, and for a team to stick with us, I think we needed it because we’ve been struggling with playing to the level of our competition. So we needed it.”

Oxford’s defense stiffened, causing the Mavericks to punt. The offense capitalized with Abraham throwing his fourth of five touchdown passes. It was also Metcalf’s third of the game, hauling in a 14-yard pass to put the Chargers up 32-20 with 4:42 left in the third quarter.

Late drama
Dalton Bradfield scampered in from 5 yards out to answer on the following drive, making it a 32-27 game with 11 minutes remaining. After an Oxford punt and a turnover on downs by the Germantown defense, all the Chargers needed to do was march down the field, eat some clock and come away with some form of points.

Knott had other ideas.

A tipped pass by Metcalf from Abraham fell into the waiting arms of one of the top cornerbacks in the state, and Knott returned it 90 yards for the pick-six. Germantown had its first lead with 2:42 remaining.

The senior felt he may have scored too quickly.

“I knew it wasn’t enough,” Knott said. “I went back to the sidelines and everybody was like, ‘You got it, you got it.’ We pretty much knew they were going to come back down and drive it and we were going to have to stop it.”

That is exactly what Oxford did, driving 80 yards on 10 plays with it ending on Metcalf’s final touchdown catch in the far right corner of the end zone. The two-point try was good, and Metcalf made the interception on Germantown’s final possession deep in Oxford territory to seal it.

“Coach believed in me,” Metcalf said. “I let the team down by tipping the ball and letting Nigel pick-six. So I had to make a play.”

Take a look inside The Pavilion at Ole Miss