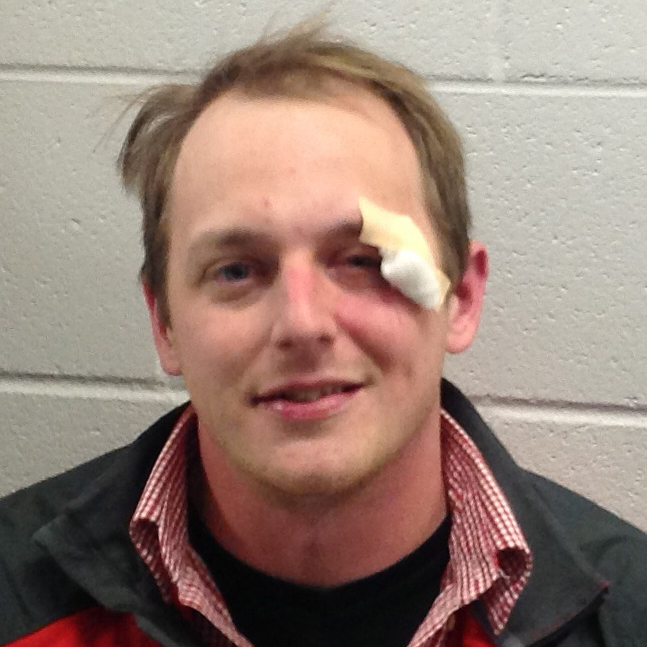 This photo was released by University of Mississippi of Chris Barnes.

On Nov. 21, 2015 at the Ole Miss-LSU football game, unidentified fans contacted officers at the field level working security for the event complaining of the behavior of a small group of individuals. The officers who responded to the complaint were certified officers from other jurisdictions, working in a temporary capacity for the University of Mississippi Police Department to assist with football security. Officers responded to the area and encountered a group of individuals identified by the complainant as being responsible for throwing items and general unruly behavior. Christopher Barnes was among the group. He was asked to leave and refused to follow those directions. An altercation followed. The university cannot comment on the altercation because it is still under review.

Barnes was removed from the stands and taken to the first aid station staffed by personnel from Baptist Hospital for treatment before being taken to the security station at the stadium. After medical personnel treated, evaluated and released Barnes, he was processed for public drunk, resisting arrest, disorderly conduct and assault on a police officer. After being processed and photographed, Barnes was turned over to personnel for transport to the Lafayette County Detention Center. The university cannot speak to what might have transpired after Barnes was no longer in UPD custody.

As a result of this incident, the University of Mississippi Police Department will conduct an analysis of the practice of hiring temporary/part-time officers and ensure UPD is following recognized best practices. The department will also critique the process within the Vaught-Hemingway security station to ensure that complete and accurate information is recorded for each arrestee, and make any changes or adjustments necessary.

The University Police Department has also released a photograph taken of Christopher Barnes after he received treatment at the first aid station and while he was still at the security station within Vaught-Hemingway Stadium. 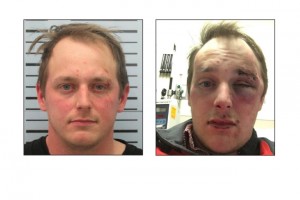 At left is Barnes’ booking photo at the Lafayette County jail and at right is a photo that was posted on his release by his family.

A mugshot released by the Lafayette County Sheriff’s Department Thursday of a man who was the subject of a viral video showing him being punched by a police officer at a football game, shows a stark difference in his injuries compared to a photo taken after his release.

Chris Barnes of Oxford was arrested during the University of Mississippi home football game against Louisiana State University on Nov. 21 and charged with public drunkenness, disorderly conduct and resisting arrest.

During his arrest, someone videotaped the exchange with police officers. One of those officers, later identified as Brock White with the New Albany Police Department, was moonlighting and working for the university as extra security for the game. The video shows White punching Barnes in the face.

The video was posted on Facebook by Barnes’ wife, Holly, who also posted a photograph of Barnes at the hospital emergency room. His left eye was swollen shut and heavily discolored. His lips had dried blood and his other eye was bruised as well. The family blamed the injuries on the cop’s punch in a description under the video.

“My husband, a two time Veteran of the US Army National Guard, was wrongfully assaulted on campus during the Ole Miss vs. LSU game by a POLICE OFFICER. He was hit twice in the face and then arrested. THEY DID NOT GIVE HIM MEDICAL ATTENTION,” she wrote. “Four hours later once he posted bail, he asked his friends to take him to the ER. He was diagnosed with a concussion, fractures to his orbital wall and maxillary sinus and contusions to the tissues of his eyes.” The video and message remained on her Facebook page this morning and has had almost 800,000 views and has been shared more than 15,000 times.

Barnes was taken to the Lafayette County Detention Center where he remained for about four hours while waiting to be bonded out.

Another man posted in response to the video that he worked at the detention center and claimed Barnes was involved in a fight while at the jail.

The sheriff’s department did not release Barnes’ mugshot until Thursday afternoon; however, the mugshot shows very different injuries than the photo posted by Barnes’ wife after his arrest. The mugshot shows a small laceration above the left eye and some minor scratches.

The Barneses hired Memphis attorneys Pool and Gerald Waggoner of shortly after Chris’ arrest and have not commented publicly about the arrest or the video since Nov. 22.

On Monday, Barnes was subsequently charged with felony assault to a police officer on the day he was due to be arraigned on the misdemeanor charges.

White was placed on administrative leave with pay by the NAPD shortly after the video surfaced.

The Ole Miss Police Department has turned the investigation over to the FBI.

The Sheriff’s Department would not make a statement Thursday, as the case “is still under investigation.”