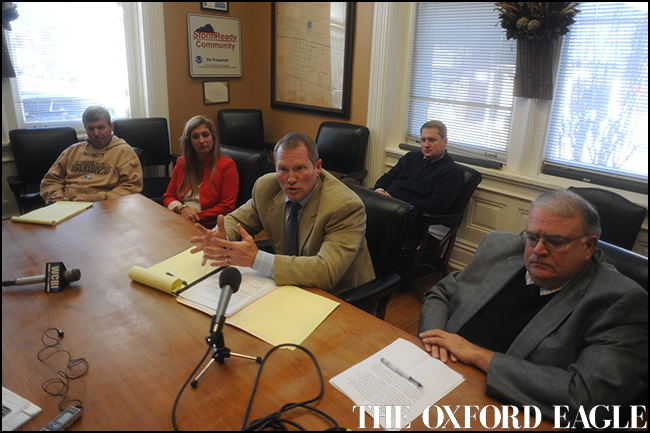 Oxford’s city officials held a news conference Tuesday in response to the “60 Minutes” piece on confidential informants and while they said they will evaluate practices with a new director coming on board, they emphasized simply staying away from drugs.

The Sunday news show featured the Lafayette County Metro Narcotics Unit and showed an interview with an informant that was threatening and some say out of control. Oxford Police Chief Joey East, Mayor Pat Patterson and Alderwoman Robyn Tannehill addressed the video and more.

East said the unit started in 1988 as a collaboration with the city, county and university, and has accepted grant money every year since inception.

“We saw an increase in a need for a drug unit, that they saw a rise and increase in the population using narcotics and young people getting caught on it. That was a big deal then,” he sad.

East said they sent Jeff Davis, a retired marshal, through training with the Mississippi Bureau of Narcotics. He came back and started the unit with now-Lafayette County Sheriff’s Chief Deputy Scott Mills and another agent.

“It was simply to try to keep our streets safe and keep them out of drugs so we don’t have a large amount of issues,” East said.

He said the grant funding was established “to help local agencies start and fight this growing problem of our young people getting involved. It was never meant to be around 25-30 years. It was simply to get them started and have enough resources to learn. We were fortunate to stay in that program and it lasted a lot longer than they thought, so it was grant funded. It is no longer grant-funded.”

East said “60 Minutes” was correct in that the unit received $54,000 in grant funding last year, but this year only received $6,000 for radios. He said units have been weaned off the funds.

East also said “60 Minutes” mentioned the unit is stat-driven. For example, the more buys you get the more grant funding you get.

“That’s not accurate,” East said. “If it’s just stat-driven, then everybody would have stayed on the grant. It’s much more than that. It was not quantity, but quality, of your cases. It was your informant process, your voucher process, processing your cases through court, analysis of the unit that you had and how you were proceeding through. Metro Narcotics has been successful from then until now with our process. We’ve not done everything right; we’ve made some mistakes, but we’ve continued to be successful.”

Regarding rumors that the unit takes money from those caught to keep the case out of the system, East said that is not true. He recommended talking with the city clerk to determine how much money goes to the unit into a special fund from those found guilty and levied fines.

The “60 Minutes” segment inferred the unit actively seeks young people, but East said the narcotics officers do not target anyone.

“We investigate, and where our investigation takes us, we look,” he said. “And in that time there’s a lot of ways that you handle the informant process. If you catch someone that’s selling or someone that has an amount on them, you have a choice to lock them up if it’s a felony amount or give them the opportunity to become an informant. It’s their choice on what they decide to do after that.”

He also said those young people are not just college students.

“We deal with everybody,” he said. “All facets of life. Drugs don’t just affect college. We don’t target anyone. We go with the investigation. We look that these are young adults of all ages. We don’t look at they’re college students. We treat everyone equally.”

The unit’s new commander, Rod Waller, who has an extensive background and will arrive in January, will have to address whether or not the unit keeps using young people as informants, East said.

“I’m going to let Rod come in and evaluate this. I’m going to let Rod see if there’s alternatives in the way that we charge people,” he said. “With young adults this is a tragedy when this happens, and I wish it didn’t happen. And I’ve seen lives ruined, families ruined, I’ve had it affect my family. I don’t think there’s anyone in this room that hasn’t had that effect. I don’t know how you get out without having an informant basis.”

“60 Minutes” told the story of college students who were killed and injured while being an informant in spots around the country, and East said to his knowledge locally no one has been killed or injured in the process.

The video on “60 Minutes” was during the reign of former director Keith Davis, who stepped down about three months ago and is now a sheriff’s deputy. The unit’s advisory committee had seen the video months ago that “60 Minutes” got wind of, and that prompted the change.

“Due to a lot of things that happened and that we discovered while evaluating our program we felt like it was best, it was a mutual agreement that Keith should step down as commander,” East said. “It was not going in the direction we felt like it should go in. We wanted to increase the amount of buys that we were doing, the larger amounts.

“We heard a tape that was brought to light in the past couple months that did not represent what we wanted our unit to look like or how we wanted to act, so a lot of that went into consideration when discussing this.”

The video and a Buzzfeed article and then “60 Minutes” broadcasting the information ensured local officials they made the right decision in making a leadership move, East said.

“We didn’t want the community to lose trust in us so we wanted to put some things in place so that we could secure that trust and they would know we were doing the very best practices that we could,” he said. “The 20 or 30 seconds that they played is bothersome. The language we used, the threatening manner we used. That’s not at all how we want to present ourselves or conduct ourselves.”

East did say it was a 20-minute tape and the rest of the tape showed agents doing a “stand-up job.”

During interviews between people caught with charges and narcotics agents, East said there is a process regarding when rights can and should be read.

East said then the various alternatives are explained to the person in the seat.

“At that time I don’t read you your rights. I advise you that once I get through talking to you if you want to talk to an attorney, get them involved, involve your parents or whoever, that’s your choice. But that’s at the point where we’re letting you know we have these charges and these are the two decisions you need to make. If we are going to arrest you and talk to you further about your charge, then we absolutely read you your rights.”

East said there are many people who are caught with drugs, especially marijuana, whether on the street or driving in their car and they are simply given a citation. They do not become a case for Metro Narcotics and are not informants.

“’60 Minutes’ made it look like a ploy to legalize marijuana,” East said. “I’m not saying I’m for or against that. I’m just saying that the laws we have currently say that’s illegal. Those are the things that out to be talked about and changed above our pay grade. That’s not our problem to catch someone who’s out here as a stoner or smokes a bud every now and again. That’s absolutely not what we want.”

East, and other officials involved echoed, that staying away from drugs is what’s needed.

Fischer gives his time as volunteer at Boys &…