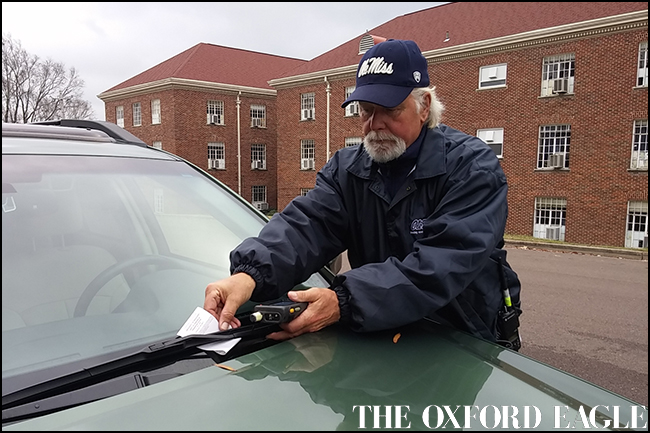 Greg Dieffenbach checks out a vehicle parked on the University of Mississippi campus. He started as a traffic officer Aug. 17.

After a couple visits to Oxford, Greg Dieffenbach was sold on the community, and now he’s one of the newer traffic officers at the University of Mississippi.

Dieffenbach, 65, came out of retirement as a human resources executive to join the staff at Ole Miss Aug. 17, and he’s happy to have a job where he walks all day, meets great people and works with a solid team.

“These past couple years we’d been coming down to Ole Miss to see our daughter and come to football games and fell in love with the place, and decided we wanted to relocate to a small college town in retirement,” he said.

He and his wife just finished building a new home in Taylor but he wasn’t quite ready to give up a day job and hang out at the house.

“In retirement these past two years now we’ve done a lot of traveling, so we really just wanted to settle down a bit,” he said. “I still had more to contribute and really wasn’t interested in doing another corporate human resources position. I’ve already climbed that ladder and wanted to do something totally different — a bucket list type of thing.”

Dieffenbach was born in New Jersey but has lived everywhere from Oregon, Boston, Idaho, Los Angeles, New England, Florida, Atlanta to Texas and more. His career with TBC Retail Group caused him to move around and travel a great deal. Now instead of being shuttled in a plane nonstop, he is using his feet or a cart to get from one end of campus to the other and is not sequestered behind a computer screen in a cubicle.

“This interested me because it had a combination of being outside, more physical activity, and it also had intellectual requirements because you have to make extemporary decisions every day about vehicle citations, decals, what’s legal what’s not,” he said. “So it required a great deal of intellectual responsibility, but it also had an element to it that was very front-facing with students and the university.

“I have the best of both worlds working outside, enjoying the greenery of the outdoors and the campus and interfacing with the faculty, staff, parents and providing assistance and direction and helping them, whatever their needs may be.”

Dieffenbach said with this role comes the fact he and the nine other traffic officers have to write citations, but there is not an emphasis on tickets or a certain quota that needs to be met. The traffic officers walk around from area to area and try to ensure people are legally parked.

He has been able to use his discretion and excuse a ticket here and there when a driver shows up in the middle of the ticket-writing process, and so far nobody has lost his or her cool with him.

“I didn’t know what to expect but most of them understand that when they’ve got the ticket, if you do see or meet them, you try to explain to them why they got the citation,” Dieffenbach said. “I think it comes down to if you show them some respect, they may not like the news, but they understand it, and they appreciate the fact you took a few minutes to talk to them about it rather than write the ticket and walk away. I think that’s important for me to help people and provide a little bit of enlightenment so they don’t do it again.”

The computer system that records tickets, assists and other data makes the job technological, but there’s still a good deal of decision-making daily.

“It’s about the integrity and quality of your work every day and engaging people,” he said. “We, in this department, see people every day because we’re out there, and what better way to support those culture values than to engage others in a professional, polite and courteous way.”

Dieffenbach said he and the other members of the department are always helping students, staff and visitors determine where to park and get passes, and there’s also an occasional jump-start of a car and a call to AAA for someone with a dead battery or flat tire.

“We’re constantly providing assistance and information upon request, and I think that speaks toward the department,” he said. “Our job here is to create a culture of respect for the institution. And to always be polite, professional and respectful no matter what situation you’re in.”

When not at Ole Miss, Dieffenbach is focused on his wife and three kids, sports and travel. He’s a member of St. Peter’s Episcopal Church and loves to work out, swim and ski and snowboard with his family, especially in the Rockies. His job will surely keep him in shape for his next outdoors adventure.

“Where else can you go to a job where you walk six to eight hours, on a beautiful, scenic campus and engage people,” he said. “It’s great.”