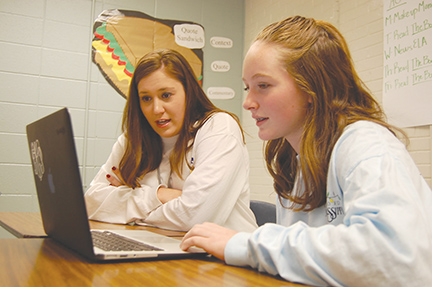 Oxford School District Eighth-grade English teacher Laura Vaughan and Grace Logan work at school on Thursday. Logan won an essay contest that will bring her to Cleveland for a museum opening in the spring.

An Oxford Middle School student will have the once-in-a-lifetime opportunity to be a guest of honor at the GRAMMY Museum Mississippi next spring after writing a winning essay.

OMS eighth-grader Grace Logan wrote her essay about a chance meeting between a young girl and a friend of Tammy Wynette. The older friend of Wynette explains to the young girl their friendship.

Part of her essay also includes a story about an Elvis concert. Logan said she used to live in Tupelo, the birthplace of Elvis, so she was familiar with Mississippi musicians.

“It was fictional but it was very factual,” she said.

The GRAMMY museum had a statewide contest for Mississippi students to submit personal writings at the beginning of November.

“I love writing and I want to be a journalist,” Logan said. “I thought this was the best opportunity to probably start practicing one day to become that. That’s really why I wrote it and I’m in orchestra so I know the musical side of the Grammys and all that. That’s two things I love into one and it made sense to submit it.”

Logan, along with three other Mississippi students, were selected as winners in the essay category for the GRAMMY Museum Mississippi’s Ribbon Cutting Engagement Contest. Sixth-grader Emma Spinks of Bell Academy and 10th-grader Shane Cockrell of Cleveland High School won as well.

The winning essays will be on exhibit at the Delta Arts Alliance during the museum’s grand opening weekend.

Logan and her fellow students will have the opportunity to be the first to set foot inside the new museum on March 5 in Cleveland.