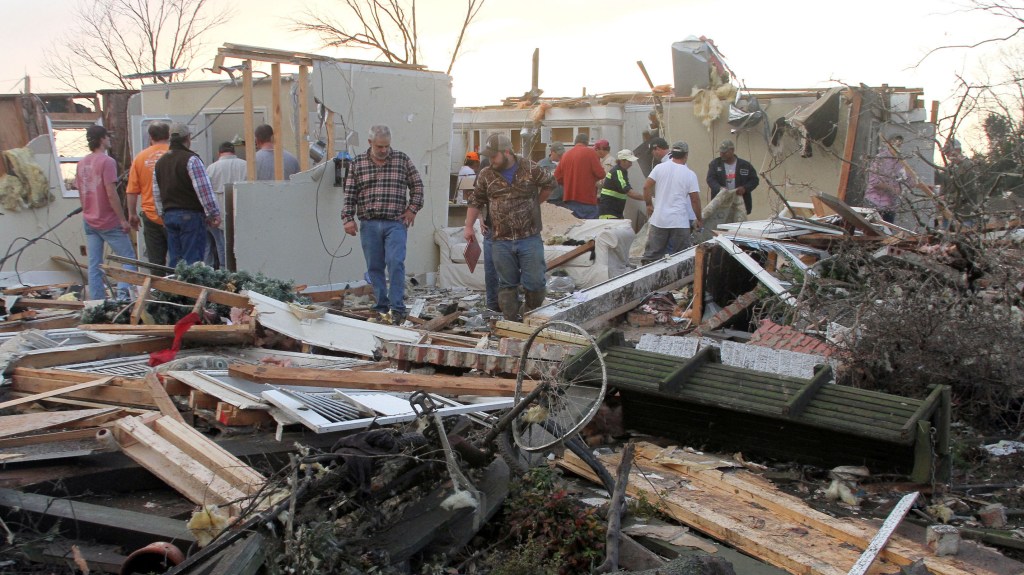 By KIM CHANDLER and Phillip Lucas

BIRMINGHAM, Ala. — The death toll in the Southeast climbed to 18 on Saturday after less than a week of tumultuous weather — unusual warmth, tornadoes and torrential downpours — wreaked havoc during the Christmas holiday.

Two deaths attributable to weather were reported Saturday in Mississippi: two people who have been missing since Wednesday, bringing that state’s death toll to 10. Late Saturday, one death was reported in Alabama.

In Texas, meanwhile, residents hunkered down for what the National Weather Service was calling a “historic blizzard.” Some parts of the Panhandle could see as many as 14 inches of snow, with sub-zero wind chills and accumulating ice. Residents in Lubbock and Amarillo prepared for a storm expected to begin Saturday night.

Jason Strunk, the football coach at Lubbock High School, said he was checking his home’s pipes and laying out cat litter for traction on his sidewalk and driveway, just as he learned growing up and living in colder climates further north. Strunk’s major concern was unprepared drivers going out on wet, icy roads.

“When we get an inch or two, people panic,” he said. “They really don’t know how to drive in this kind of stuff.”

More than 400 homes in total were affected, he said. Severe storms are forecast for Sunday night through Monday as a strong cold front pushes through. Tornadoes are possible, and residents are asked to remain alert.

The flooding is the result of heavy downpours that have thrashed the southeastern U.S. since Wednesday, bringing record rainfalls in some areas. Four inches of rain walloped the city of Mobile, Alabama, on Wednesday — smashing the previous record of 2.2 inches set in 1990.

Six people were killed in Tennessee, including three who were found in a car submerged in a creek, according to the Columbia Police Department. The Tennessee Emergency Management Agency said Saturday that authorities were monitoring areas for possible flooding.

One person died in Arkansas, and dozens of homes were damaged or destroyed.

In Alabama, Gov. Robert Bentley on Saturday visited weather-damaged areas in Coffee County. A statement from the governor’s office said that about 190 roads across Alabama were closed due to flooding.

Authorities on Saturday recovered the body of a 5-year-old boy who drowned after the car he was riding in was submerged by floodwaters on Friday, said Coffee County Coroner Robert Preachers. The search is ongoing for a 22-year-old man who was also in the car.

The National Weather Service in Huntsville warned residents to avoid driving in areas where flooding was expected.

A tornado touched down in Birmingham on Friday evening, but damage was limited.

Peak tornado season in the South is in the spring, but such storms can happen at any time. Exactly a year ago, tornadoes hit Mississippi, killing five people and injuring dozens.