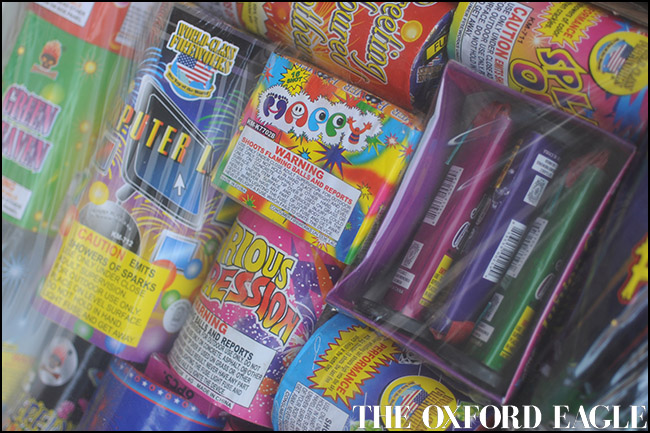 There are a wide variety of fireworks to choose from, and officials urge safety while using them.

Officials want folks to ring in the new year with a bang, but do so with caution when using fireworks.

“Be extremely careful when shooting off fireworks,” Johnson said, “and follow manufacturer recommendations. Fireworks should be monitored to make sure they’re not catching anything on fire. With the rain we’ve had lately that shouldn’t be an issue, but the way the wind has been blowing it could dry conditions out some. When handling fireworks, always maintain safety and provide adult supervision.”

According to the U.S. Consumer Product Safety Commission, 11 people were killed using fireworks in 2014 while more than 10,000 made a trip to the emergency room after being injured as a result of fireworks.

Most of those injuries were to young children.

While you may think you’re keeping a close eye on the young ones and only allowing them to use sparklers, a majority of injuries to children are caused by the non-explosive device due to the extreme heat they produce. Sparklers can reach up to 1,000 degrees and can cause serious burns if not used properly.

Trip to the ER

Dr. Michael Koury, an emergency medicine physician at Baptist Memorial Hospital-North Mississippi, has seen a few fireworks-related injuries in the three or four years he has been in Oxford working the emergency room.

“The two times a year we see fireworks injuries are the Fourth of July and New Year’s,” Koury said. “It’s usually two or three injuries on average related to fireworks.”

Koury said most of the injuries he has dealt with have been to unsupervised children or people not practicing true safety.

“The biggest things are traumatic injuries of the eye either causing a burn to the eye or potentially a bottle rocket injury to the eye,” Koury said. “And if they’re severe enough, they’ll have to go to a higher level of care if it’s a really bad injury.”

Although he’s never treated a fireworks injury bad enough where someone has lost digits on their hands, Koury did say often times people hold onto fireworks too long rather than shoot them on the ground. And, don’t bend over to check on a firework that has not detonated.

“Many times alcohol plays a role,” Koury said about irresponsible use of fireworks. “Don’t assume it’s not lit because it could explode at that point. I advise people to play by the rules and don’t point them at each other. Monitor children, have a good time but do it responsibly.”

The use of fireworks is illegal within the city limits of Oxford, but allowed in the county.

Here are some tips

• Use common sense and always read and follow the directions on each firework.

• Never point or throw fireworks at another person.

• Buy from reliable fireworks sellers. Store them in a cool, dry place.

• Always have an adult present when shooting fireworks.

• Put used fireworks in a bucket of water and have a hose ready.

• Only use fireworks outdoors, away from homes, dry grass, and trees.

• Light only one item at a time and keep a safe distance.

• Never light fireworks in your hand.

• Never experiment or attempt to make your own fireworks.

• Never give fireworks to small children.

• Never carry fireworks in your pocket.