Each month of the year saw big breaking news 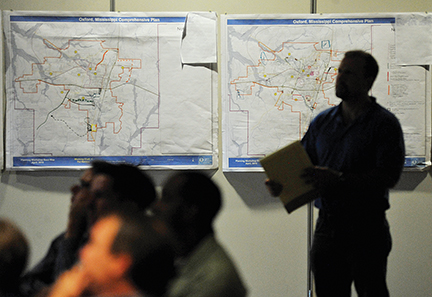 Bruce Newman Maps are taped to a wall as attendees at an Oxford Vision 2037 meeting listen to a speaker at the Oxford Conference Center in the spring. Vision 2037 was a top talker in 2015, starting in January when the city hired the Orion/Walker group.

Throughout 2015, two issues that were ever present in the LOU community were parking and controlling growth — two topics that are certain to carry over into 2016 and beyond. Oxford officials spent much of the year debating, determining and deciding if a parking garage is needed near the Square to alleviate parking congestion in the area. At the same time, the city took up future growth and the direction it should go, hiring experts to map out the next 20 years with Vision 2037.

Meanwhile, county officials ended the year also looking toward the future with talk of updating the comprehensive plan. Here is a look back on some of the top stories of the past year.

The Mississippi senate, with education committee chairman Gray Tollison (R-Oxford) leading the way, successfully passed a resolution as an alternative to Initiative 42, the proposal on the November ballot that would require Mississippi to fund an “adequate and efficient system of free public schools.” According to Initiative 42, if legislators fail to provide full funding as required by the Mississippi Adequate Education Program, people could ask a chancery judge to order the state to provide the money.

The alternative proposal that passed the Senate 30-20 and was also placed on the ballot required funding an “effective system of free public schools.” It would not allow an appeal to chancery court.

Critics claimed having both proposals would cause confusion at the polls.

Also in January, Oxford aldermen hired the Orion/Walker group to map the city’s future through 2037.

Longtime Oxford School District trustee Buddy Chain, 79, announced he would step down from his post.

Approximately 5 inches of snow fell in Lafayette County in the last week of February, bringing with it school closures and slippery roads that caused several traffic accidents in the area. A University of Mississippi student died while sledding down a hill in the Highland Square neighborhood.

A week after nearly half a foot of snow fell in Lafayette County, residents woke to ice and sleet covering roadways that shut down schools in the area once again. The icy conditions caused havoc for motorists, but March soon heated up and nothing was hotter than when news broke the state college board had not renewed Ole Miss Chancellor Dan Jones’ contract.

By a 9-2 vote, the Institutions for Higher Learning decided to direct education commissioner Dr. Jim Borsig to begin preparations to search for a new UM chancellor. The uproar was loud from a majority of faculty, students and alumni in support of Jones.

Rallies on behalf of Jones were held and local legislators attempted to pass measures in the legislature to remove IHL’s power over Mississippi universities’ personnel matters.

Also in March, it was revealed Lafayette County is the fastest growing in population in the state and 38th nationally, according to the U.S. Census Bureau.

Former University of Mississippi student Graeme Phillip Harris, who tied a rope around the statue of civil rights icon James Meredith in February 2014, was indicted by a federal grand jury.

A deal between Dan Jones and the IHL could not be brokered to keep the chancellor on at the University of Mississippi. According to Jones, the IHL offered to extend his contract 21 months as long as he retired in June 2017. Jones said he was not willing to do so.

A county employee was killed when a solid waste truck overturned on Wildberry Lane near Highway 30. Kalvin “Spanky” Caldwell was pinned beneath the vehicle when it overturned.

While traffic has been a major concern in the county, MDOT hoped to alleviate some of the congestion on Jackson Avenue when it opened the new intersection on Highway 6. On the same day the intersection opened to traffic, a major sinkhole on Highway 6 caused traffic delays for motorists as well as detours.

The Lafayette County Metro Narcotics Unit came under fire following an online news article about their practices in using college students as confidential informants. Keith Davis, head of the narcotics unit, admitted the use of informants to build drug cases but called the article “a fictitious story.”

During a special election to fill the U.S. Congressional seat of the late Alan Nunnelee, Democrat Walter H. Zinn Jr. and Republican Trent Kelly advanced to a June runoff after distancing themselves from a field of 13 candidates.

Also in May, Morris Stokes was named the interim chancellor for the University of Mississippi by the IHL.

Trent Kelly defeated Walter Zinn Jr. in a runoff to become the congressman for the 1st Congressional District. Kelly took 54 percent of the vote to win the seat.

In federal court, Graeme Phillips Harris, the former University of Mississippi student accused of placing a noose around the statue of civil rights activist James Meredith, pleaded guilty to the charge.

Iconic Confederate flag supporter Anthony Hervey died in a single-vehicle car wreck on Highway 6, just east of Oxford. Hervey, a black man who could often been seen around the Square and on the Ole Miss campus in a Confederate uniform, was returning from a pro-Confederate flag rally in Birmingham, Alabama, when the vehicle he was driving went off the roadway and crashed. A passenger in the vehicle claimed they were being chased by another vehicle and caused the wreck. An investigation by the Mississippi Highway Patrol did not reveal if a second vehicle may have been involved. A large crowd, including members of the Sons of Confederate Veterans, turned out for Hervey’s funeral at First Baptist Church in Oxford.

Buddy East defeated Bruce Jenkins in the primary election to become one of the longest continuously serving sheriffs in the nation. East first became sheriff of Lafayette County in 1972 at age 29.

At age 72 East took 70 percent of the electoral vote and if he finishes out his term in 2019, he will have served for 48 years and become the longest-serving sheriff on record in the U.S. East was one of several incumbents re-elected, while county supervisor races heated up with Democrats headed to runoff elections.

Another notable sudden death occurred when Oxford’s well-known “Big E” Will Atkinson died at age 51. He was known as Oxford’s own Elvis impersonator and enjoyed entertaining with classic Presley songs.

Graeme Phillip Harris was sentenced to six months in federal prison for his role in placing a noose around the neck of the James Meredith statue on the Ole Miss campus. He is scheduled to report to federal prison on Monday. Once released, he will have to perform 100 hours of community service and one year of supervised probation.

Keith Davis, the head of the Metro Narcotics Unit, resigned amid an ongoing national online article about customary practices of the agency using student confidential informants. Davis had been with the unit since 2006 and was in charge for the last five years. Davis now works for the Lafayette County Sheriff’s Department.

Jeffrey S. Vitter received approval from the Institutions of Higher Learning as the next chancellor of the University of Mississippi, replacing Dan Jones. The 17th chancellor at UM will start his new job today.

By a 33-15 vote, the Associated Student Body at the University of Mississippi passed a resolution seeking support from the faculty and staff to have the Mississippi state flag removed from campus. Two days later the Faculty Senate voted 41-1 in favor of the resolution to remove the state flag from campus. By the end of the week, the state flag was lowered and furled from the Lyceum Circle during an unannounced ceremony.

Convicted killer Regis Mister was sentenced to 48 years in prison for murdering his mother and 12-year old brother in November 2013. The former Yalobusha County Sheriff’s deputy reached a plea agreement to two counts of second-degree murder after originally being charged with first-degree murder. He will not have the possibility of early release from prison.

Kenneth Roberson, a Pontotoc funeral home director, was found murdered in his Oxford home. A couple days later a vehicle belonging to the victim was found in Canton. Before the week’s end, the Oxford Police Department charged Nathaneil Arnes Huddleston with the murder.

In the most heated general election races, Kevin Frye and David Rikard were both elected as new county supervisors, while Oxford Alderman Jay Hughes, a Democrat, defeated incumbent Republican Brad Mayo for the House District 12 seat.

In the statewide referendum, voters said no to Initiative 42 that would have changed the state constitution and required the state legislature to fully fund public education, according to the Mississippi Adequate Education Program.

At the beginning of the month, Joseph Johnson resigned his position as county administrator after eight years on the job. His replacement is expected to be announced next week.

Chris Barnes, who filed charges claiming he was assaulted by a law enforcement officer during the Ole Miss-LSU football game, dropped his charges when the FBI concluded their investigation and cleared the officer who was involved. A viral video surfaced on social media showing the incident in Vaught-Hemingway Stadium, followed by a photo of Barnes with a swollen face. Days later the Lafayette County Sheriff’s Department released a booking photo of Barnes with a slight cut and bruising. Barnes was initially charged with public drunkenness, disorderly conduct and resisting arrest. He has since been charged with felony assault on a police officer.

Following a “60 Minutes” report on the Metro Narcotics Unit, Oxford Mayor Pat Patterson, Police Chief Joey East and Alderwoman Robyn Tannehill held a press conference to address the national TV piece as well as the drug unit, which came under fire about practices in using students as confidential informants and resulted in the resignation of Keith Davis as its leader.

Oxford-based FNC Inc., announced it was being sold for $475 million to CoreLogic. Founded in the mid-90s, FNC pioneered new ways to streamline the mortgage approval process with its flagship product, the Collateral Management System, or CMS.