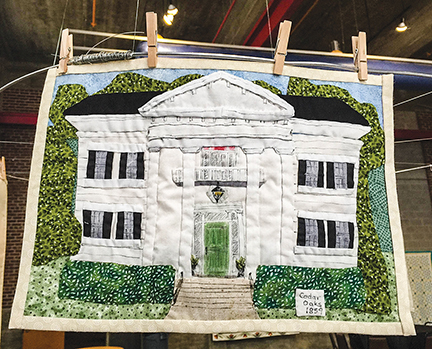 Marianna Ochs created small quilts that were inspired by the city of Oxford’s historical buildings and landmarks.

When Marianna Ochs, a member of the Piecemakers Quilt Guild of Oxford, decided to stitch her latest creation, she was inspired by the city of Oxford’s historical buildings and landmark stores.

“I have been quilting for many years and love creating in fabric,” she wrote, describing her latest project. “I prefer applique over piecing, and enjoy combining colors and fabric designs to get just the right effect.

“Recently, after seeing a fellow quilter’s small landscape art quilt, I decided to see if I could also make one. My love for old buildings and the city of Oxford led me to this series – to create the buildings I took photographs and then work from a sketch.”

Her first attempt was the Lafayette County Courthouse.

“It was great fun trying to figure out all the architectural details,” she said. “Then I decided to make one of my favorite store, Square Books.

“That proved to be an interesting puzzle, especially trying to portray realistic books for the window display. I made the decision to turn them into ‘postcards’ as a fun treatment for the back of each quilt.”

The postcard quilts are now hanging inside the Powerhouse, home to the Yoknapatawpha Arts Council, at 413 S. 14th Street in Oxford. They are part of a quilt exhibit sponsored by the Piecemakers Quilt Guild of Oxford.

Wayne Andrews, executive director of the YAC, said the exhibit is part of the Oxford Fiber Arts Festival held each January that began five years ago. It will be Jan. 28-30.

“It’s cold in January, so we thought about knitting and all the things that go with cold weather,” said Andrews, explaining how they conceived the event that now draws 3,000 people.

“They come in for several days,” he said. “We have classes and workshops from top artists around the country. We have exhibitors, regionally-made products. You’ll see the spinning of yarn.”

Andrews said there are many fiber arts festivals in the country, and Vicksburg recently started one.

He said the quilts will be on display in the Powerhouse through the middle of February.

“This will all wrap up in February with the Mississippi Quilters having their guild meeting or association coming into town for the weekend,” Andrews said.

The Piecemakers Quilt Guild of Oxford was founded in 1992 to provide opportunities for quilters to learn about the history of quilting and grow and develop artistically and technically.

The guild has 27 members who meet monthly to view trunk shows, demonstrations, and learn new techniques. They hold workshops, teach others the craft of quilting and invite well-known experts to teach.

Piecemakers members continually make quilts for a number of charitable organizations, including the Veteran’s Administration Home, Interfaith Compassion Ministry, and the Department of Children’s Services of the DHS. This is their third Powerhouse quilt exhibit.

Members sent descriptions of the quilts on display.

Pat Gillenwater said she grew up watching her mother and grandmother quilt.

“As a result, I have made several quilts over the years, but have become very excited about quilting since I joined the Piecemakers,” she said, describing her quilt. “These quilts represent my first experience making row quilts that feature horizontal rows of images.”

Jane Roy has sewn all her life, making everything from window covers to heirloom clothing and wedding dresses.

“This log cabin quilt was my very first attempt at quilting at the age of 83,” she said. “The log cabin quilt pattern dates from about 1830 in England and has been popular in the United States since the 1860s.

“The center square represents the hearth, while the surrounding rectangles represent the logs of a building. There is some evidence that this same design was even used in ancient Egypt.”

Cheri Weber said her quilt was created in honor of her 25th wedding anniversary.

“It uses 25 fabrics, collected from all the states we have lived in,” she said. “The quilt is named Michigan because the border fabric reminds me of Northern Michigan, and Michigan is where this journey began.”

“In 1971, I was given a beautiful silk kimono,” she said. “I wore and enjoyed it for years, but for the last 20 years or so, it has been hanging in the back of my closet. I could not bear to part with it, so I decided to make a wall quilt and enjoy it every day.

“I cut out a center portion (the solitaire) for the quilt center. After applying borders, I stabilized flowers in extra parts of the kimono and cut them out.

“Thread embroidery was then applied to the images to attach the flowers to the quilt. It took an act of courage to cut into my beautiful kimono, but I am glad that I did it.”

Deborah Robinson made her quilt for her daughter’s graduation from Mississippi State University School of Architecture.

“Some of the blocks have photographs of her from birth to graduation,” she said.

“Over 100 shirts show the passions and activities that have shaped his life so far,” she said.

Cheri Weber’s quilt is called BQ3: Any Way You Brew it.

“I made this quilt to express my longtime love of coffee,” she said.

“This is the second painted quilt I made, basing the images on photos taken during a safari in Kenya in 2004,” she said. “I was gratified to see a huge variety of animals and wanted to capture some of their beauty in a quilted wall hanging.

“Working from my photos, most of the animals were fairly easy to paint. Most challenging were the zebras and giraffe.”

Guests and new members are invited to join the Piecemakers group. For more information, call 662-234-2907. 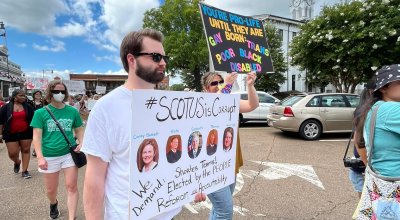