SLOW START: Devils swept by Independence in first games back from break 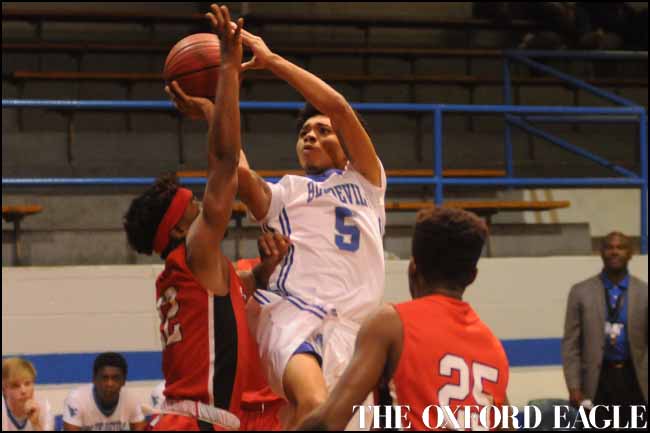 If his young team is going to get any better, he needs them to play teams that are further along than his is at this point in the season.

The Blue Devils got a good dose of that in their 67-42 loss at the WVHS gym.

Unfortunately for Water Valley (2-9, 0-2 Region 2-3A), Independence got off to a fast start, and the Blue Devils could not hit any shots. The Wildcats (10-8, 3-1) used it to generate a 22-5 first-quarter lead, which was enough of a deficit to hold off Water Valley.

Jack Pritchard was the only Blue Devil to reach double digits with 14 points while Tyrese McGuirt and Marquez Caldwell chipped in nine and eight points, respectively.

“(Tonight) was the best thing that could have happened,” Taylor said. “Our kids were kind of lackadaisical over the holidays. We didn’t play any games, (Independence) did. We now have something to measure ourself by and see whether or not we can reset the standard.”

Lady Devils stumble
The night did not go well for Water Valley’s girls team either as they suffered a 77-39 defeat at the hands of a very good Independence team. The game was close through the first two quarters with the Blue Devils (5-6, 1-1) only trailing Independence by 11 points at halftime.

Things began to unravel for Water Valley in the second half when the Wildcats (15-2, 5-0) flexed their muscle, outscoring the Blue Devils 38-11.

“We gave up too much dribble penetration,” Water Valley coach Jason Purdy said. “(Indpendence) is just so athletic and we gave up too many offensive rebounds. … We’ve got to put it all together. Defense has been our strong point all year, but tonight it was one of our weaker ones. I thought offensively we were more aggressive tonight.”

Water Valley returns to the court Friday when both teams travel to North Panola to continue region play.