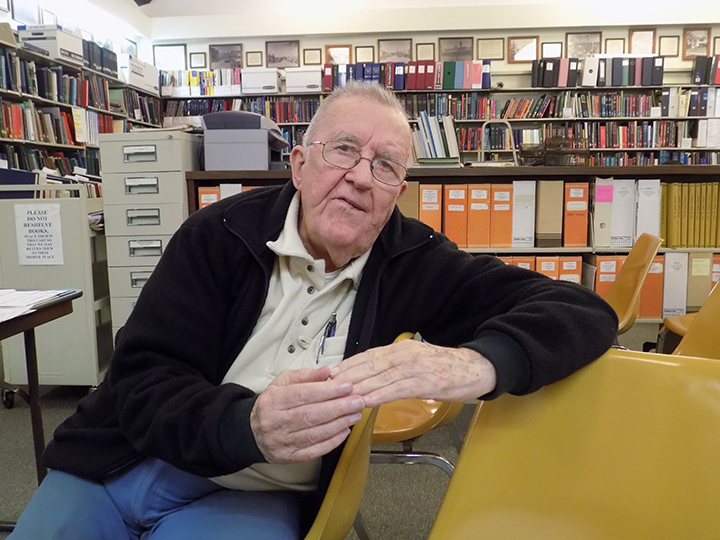 Will St. Amand devotes a portion of his time helping locals and visitors locate records in the Lafayette County and Oxford Public Library while he isn’t out recording data on the county’s cemeteries. He often uses marriage licenses, which are bound by year, and the collection includes the volumes sectioned by black and white before the races could legally marry.

Recording local cemetery information is not easy sometimes, but it is worth it for a former genetics professor.

Retired University of Mississippi professor Will St. Amand is the vice president of the Lafayette County Historical and Genealogical Society. He is also the sole owner of the only updated comprehensive cemetery information for the county.

St. Amand said it is hard to look at gravesites covered up with dirt or those that have been forgotten, but he believes they still matter today.

Although the original research of locating abandoned family cemeteries in Lafayette County began long before he came to Oxford, he has spent years verifying, updating and preserving the information for future generations.

Findings were published in two volumes, in 1978 and 1979. Gravesite locations were meticulously described with addresses and physical markers to ensure sites could be found again.

Unfortunately, their hard work has been undone by time. Trees have been cut, road names have changed and shrubbery has overtaken hallowed ground. St. Amand and others realized this and began a project that is taking years to complete.

Along with the late Jim Paschall, St. Amand began updating the original gravesite locations. The pair added GPS coordinates and noted locational changes to as many cemeteries as possible. Additionally, they spoke with locals to track down lesser-known cemeteries. The compiled data is held in a single unpublished volume tucked away in the Lafayette County and Oxford Public Library records room.

Since Paschall died in 2013, St. Amand has done his best to continue their work. Although it is not yet complete, St. Amand said he intends to finish it.

He said since he has been researching, several cemeteries have been essentially destroyed. Sometimes the public does not discover the gravesites until after construction or after family property is sold without knowledge of the cemetery.

In 2014, the Lafayette County Planning Commission put a stop to one development due to an unknown gravesite near Lafayette Springs. The site was identified through the volumes of records St. Amand had access to. The graves dated back to 1846 and contained a Civil War veteran.

In a different instance, the historical cemetery behind the Tad Smith Coliseum lost key gravesite information after grave markers were removed to mow the lawn. The cemetery was full of veterans who had fought in Shiloh, Tennessee.

St. Amand said the loss of key information was regrettable, but there are other instances that go unnoticed.

“Stones disappear. They get vandalized,” he said. “I know of some cemeteries where they get knocked over because deer use them as rubbing places to get rid of ticks. I know of a place that unfortunately has some bullet holes because they’re (gravestones) used as targets. I know of some places where stones are broken and fallen out of place.”

The fact that people from all over America visit Oxford’s library to search for deceased relatives motivates St. Amand to continue his plight.

People come to Oxford and spend hours looking through thousands of marriage licenses, birth certificates, death certificates and cemetery records. Most recently, an uncle and his nephew drove more than 2,000 miles from Carson City, Nevada, in search of one man who lived in Lafayette County in the 1800s.

The fact that people come to Oxford for information motivates him to continue his work, whether they drive across the country or down the street.

“These aren’t just a collection of names, dates and places,” he said. “These are people.”

Gay Graeber: From teaching to drawing