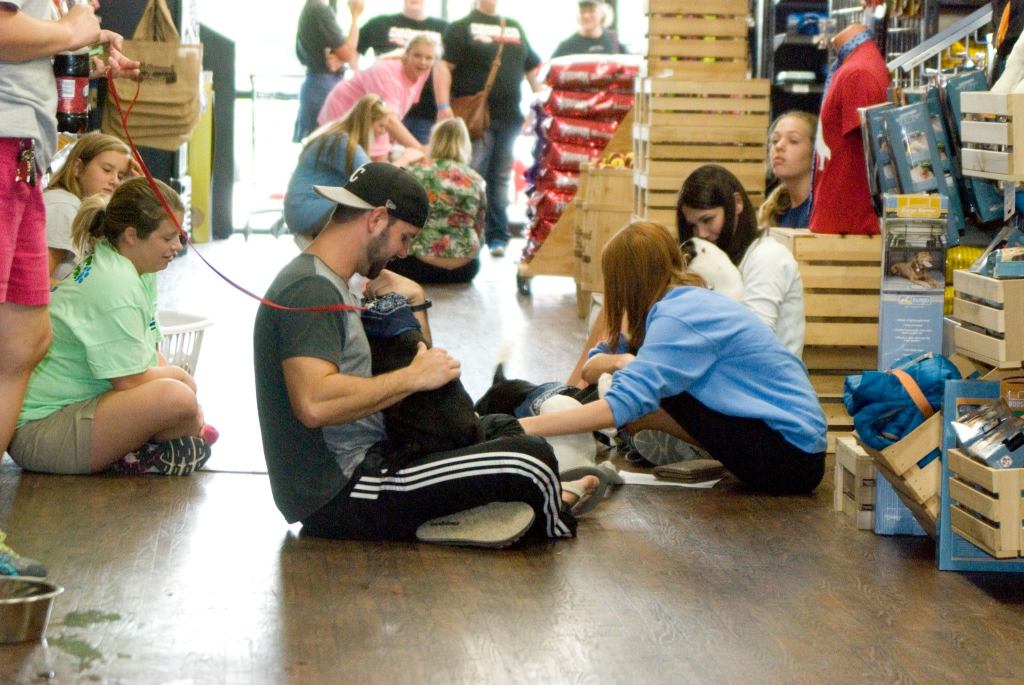 Volunteers play with animals that are up for adoption through Second Chance Animal Alliance at Hollywood Feed in Oxford. The store allows the Water Valley nonprofit to bring in rescued dogs in an effort to find them forever homes.

A group of six women and an allegiance of animal lovers who believe in their mission are saving lives and changing culture in Water Valley.

Second Chance Animal Alliance recently celebrated its one-year anniversary of saving dogs that wind up at the Water Valley pound.

All six women from the town wear every hat possible for the organization, whether it is cleaning kennels at the pound, transporting a dog, planning a fundraiser, organizing an adoption event, testifying in an animal cruelty case or helping educate the community. The women have a variety of demanding jobs, their own pets, children and husbands, but they unite like sisters for animals.

It all started when Anna Gordon went down to the pound and discovered the condition of the kennels and dogs and decided to make her findings go viral on Facebook.

“A week before I posted the pictures I went down to the pound and there were about six dogs down there with very old feces in there,” the 31-year-old said. “One of the dogs had had diarrhea and the food was just kind of poured out next to it. They were not cleaned up after, they were not fed regularly, the water was nasty, and it bothered me. So I showed the pictures to my dad and he picked up the phone and called the mayor. And the very next day I went down there to check on the dogs and they were all gone.”

Where they went was never answered.

The photos were posted, went viral and nobody did anything.

“When she put them on social media they went around and everyone kept saying ‘let’s do something.’ ‘We need to do something.’ ‘Why don’t we do something? Nobody did anything,” the 32-year-old said. “It was late one night, I said, ‘OK, I’m sick of everyone saying let’s do something and nobody doing anything. So, who can meet tonight at 8:30?’ So we met that night until probably almost 11 o’clock and worked out a game plan for the ones that were down there. At the time we had Captain and Hope.”

Nine showed up to that first meeting. Six are now board members and the other three are involved volunteers.

The women paid the reclaim fees when Captain and Hope were not claimed by owners and said the dogs were theirs. Captain wound up on a transport to New England. Hope was transported to a foster home in Calhoun City and then was adopted a week later.

“It just kept on from there,” Smith said. “Every time a dog got picked up we immediately found a way to get down there somehow, some way, get a picture of it.”

One year later, Second Chance has saved more than 80 dogs, and the women are quick to point to Bottletree veterinary clinic in Oxford as their saving grace.

The clinic has worked with them through eight parvo survivors, at least a dozen heartworm treatments, an HFO surgery, every spay and neuter, microchips, vaccines as well as two Demodex mange and two Sarcoptic mange cases.

“We cannot express how good they are to us,” Gordon said of Bottletree. “They basically do anything we ask and we have a charge account. I don’t know any other place that would do that. They have the same heart as we do.”

Smith said every element of care for the animals and running a rescue falls on the six board members, which successfully received 501(c)3 certification in August, and Second Chance runs by donations only.

“We pretty much operate every day with just the six of us,” Smith said. “When big things happen we phone in our foot soldiers, which are mommas and daddies and sisters and brothers and friends of Second Chance and fosters we know can pick up right then and take a dog. We love them like family.”

Donations come in frequently from those appreciative of the cause, and when big things happen, more step up to the plate.

“Our babies never go without treats, and we have a toy box. To me that’s huge,” she said. “Anybody who gives anything, we’re so grateful. Somebody donated us a box of Alpo snaps last week and it was the perfect time because we were out. And they love those little things.

“We’ve made it a year by God’s grace. Literally when we think everything’s falling apart and we can’t go on, somebody walks up and says ‘hey, I thought you could use this.’ Or, ‘hey, I felt the need to give you this much money.’”

The group does a lot of boarding and relies on foster homes, of which Smith said more are needed, especially because they are putting animals on transports up to Wisconsin and they need to be in a home for a couple weeks prior to transport.

“We have very few fosters. We need fosters badly,” she said. “We need to have a dog crash on your couch for a little bit. Or $25 for him not to.”

For the team of six women, helping those who wind up in the pound is just as important as educating residents on spaying and neutering pets, proper nutrition, and any injury or illness, especially mange, does not mean a dog needs to be shot in the woods.

“The main thing we focus on with Second Chance is education of the community of what it takes to solve the overpopulation, which is the spay and neuter program, which we’re always available for that,” Smith said. “If someone needs their dog spayed or neutered, call us. We will find a way. We will find a donor and we will make it happen.”

Smith said they educate people on vaccinations also and keeping pets fed healthy food. In fact, a dream of theirs is to have a community food pantry for dogs with wholesome food.

Smith also said they are working with city officials on education, and the city has allowed them to hire their own part-time animal control officer to assist the city’s ACO, who wears many hats.

“We had six dogs deemed vicious by the city,” Smith said. “These dogs were scared. They were terrified. They had been abused. They were neglected. They were lonely. They needed love. The city did not know how to property identify what dog was vicious or if it was just terrified.”

“She is a phenomenal young lady,” Smith said. She knows all their names. She medicates every one of them consistently. We would not have gotten over this last case of Sarcoptic mange without Abby. Cleans twice a day, feeds twice a day, everyone gets outside time. She knows them inside and out.”

To ensure the group is operating by proper standards, Smith attends animal conferences yearly. She has implemented many positive things for the endeavor like new beds, keeping food up at proper standards and pushing the Return to Home program, which encourages people to have their pet identification on them for reclaiming purposes. She’s also building an emergency shelter at her home.

Gordon and Smith have various things that keep them going and the women all take turns so that nobody gets exhausted.

“There’s nobody else to do this, and nobody did it before we started,” Gordon said.

“And that’s what keeps us from getting burned out,” Smith finished.

Smith said it was their second dog, Hope, in a blanket on a couch in her forever home that sealed the deal for her with the rescue.

“We, as our slogan, use Proverbs 12:10,” Smith said. “‘The righteous man cares for the needs of his animals.’ I’ve always believed God breathed life into us the same way he breathed life into them. Why do they deserve any less respect than we do.

“And those faces. You can see the way it looks when we get a seizure case. When we get a dog that’s never been held. Never been touched. Never ridden in the car. After they’ve been with us for three or four days, then you see that face. You need any more reason than that.”

Gordon said she sticks with it to make a difference.

“My passion is animals. It always has been,” she said. “To me if you want something to change, you’ve got to do it yourself.”

Adopter Andi Epes is grateful for their determination, as is her new mixed-breed puppy Edee, who was one of the parvo cases the rescue saved.

“We fostered her first and things went well, and our youngest daughter just decided she had to have her,” she said. “Second Chance was great in helping us get her adjusted and answering questions and things like that.”

Epes said she and the community are grateful for what the rescue group is doing and knows before they came along there were a lot of dogs not taken care of properly or at all in town.

“They come in and rescue them and find them host homes or adoption homes and I think it’s been a great asset to Water Valley,” Epes said. “These girls work really hard. Those girls go above and beyond and have worked with conditions that are very favorable or supportive to help everything they can.”