STAYING ALIVE: ‘Dores hold off Shannon, advance in 4A playoffs 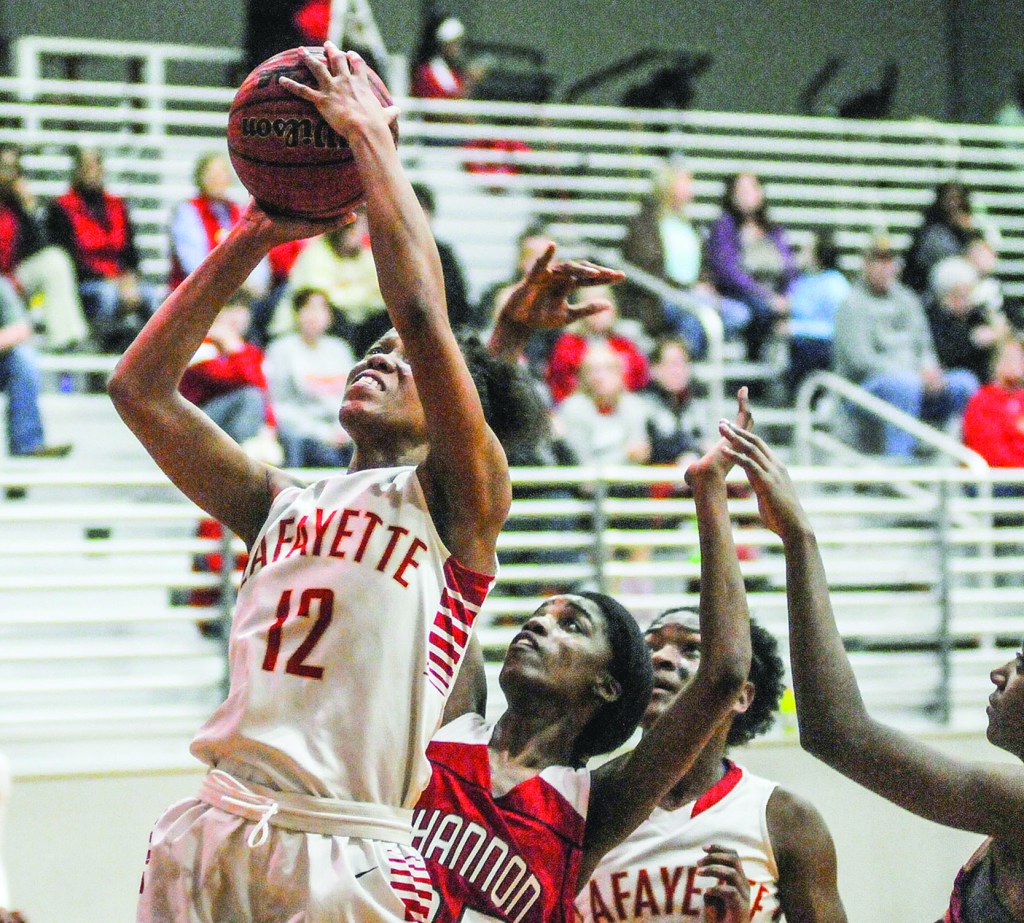 Lafayette’s Orianna Shaw (12) shoots against Shannon’s Kim Walton during Monday’s MHSAA Class 4A first-round playoff game at the LHS gym. The Commodores advanced with a 43-41 win.

Shayne Linzy took a timeout during the fourth quarter and told his team what it was going to take to avoid an upset bid by Shannon and its speedy point guard.

“We had told the girls during a timeout in the fourth quarter that somebody’s got to take a charge because that will turn the game,” Lafayette’s girls basketball coach recalled.

Orianna Shaw obliged when she stepped in front of a driving Asia Anderson, Shelbi Buford knocked down a pair of go-ahead free throws with nine seconds left, and the Commodores kept their season alive with a 43-41 win in the opening round of the MHSAA Class 4A playoffs Monday at the LHS gym.

Lafayette (21-6) advanced to host Leake Central, a winner over Greenwood, on Friday at 7 p.m.

“Ori takes that charge. Then we get those free throws from Shelbi, we get a couple bounces and a couple stops, it was huge,” Linzy said.

Buford led Lafayette with 16 points while junior guard Shaniyah Buford added 14 points. Anderson had a game-high 20 points for Shannon, helping the Red Raiders, the No. 4 seed out of Region 1, push the top-seeded Commodores to the limit.

Lafayette led by as many as 13 in the first half, but the Red Raiders used their pressurized defense to turn the Commodores over and methodically catch up. The Commodores had trouble staying in front of Anderson, who either finished herself or dished to a teammate for a basket after drawing in the defense.

Behind 13 second-half points from Anderson, Shannon outscored Lafayette 14-6 in the third quarter and took the lead early in the fourth before the teams spent the rest of the game going back and forth. The Commodores switched from their staple man defense to a zone in the final minutes to try to slow Anderson down, a move that paid off when it counted.

“We weren’t getting stops in our man, and (Anderson) is extremely fast,” Linzy said. “She’s very strong. I was hoping by going to a zone that maybe we’d already have some people down in that area, and she still was able to get to the hole.”

Turning point
Anderson appeared to give Shannon the lead again with 23 seconds left when she split a pair of defenders on the wing and drove in for a bucket, but Shaw slid over to draw the charge to keep the game knotted at 41.

The teams traded turnovers before Shelbi Buford sank both freebies after being fouled on a breakaway, and the Commodores got a stop on the Red Raiders’ final possession to seal the victory.

“Not until that last one did we get a charge,” Linzy said. “I was proud to see that. That turned the game.

“It’s hard to practice against speed and athleticism like that. Proud of the girls. We got down, we got frustrated, but we were able to battle back. That’s a credit to those girls to keep fighting and not quit.”