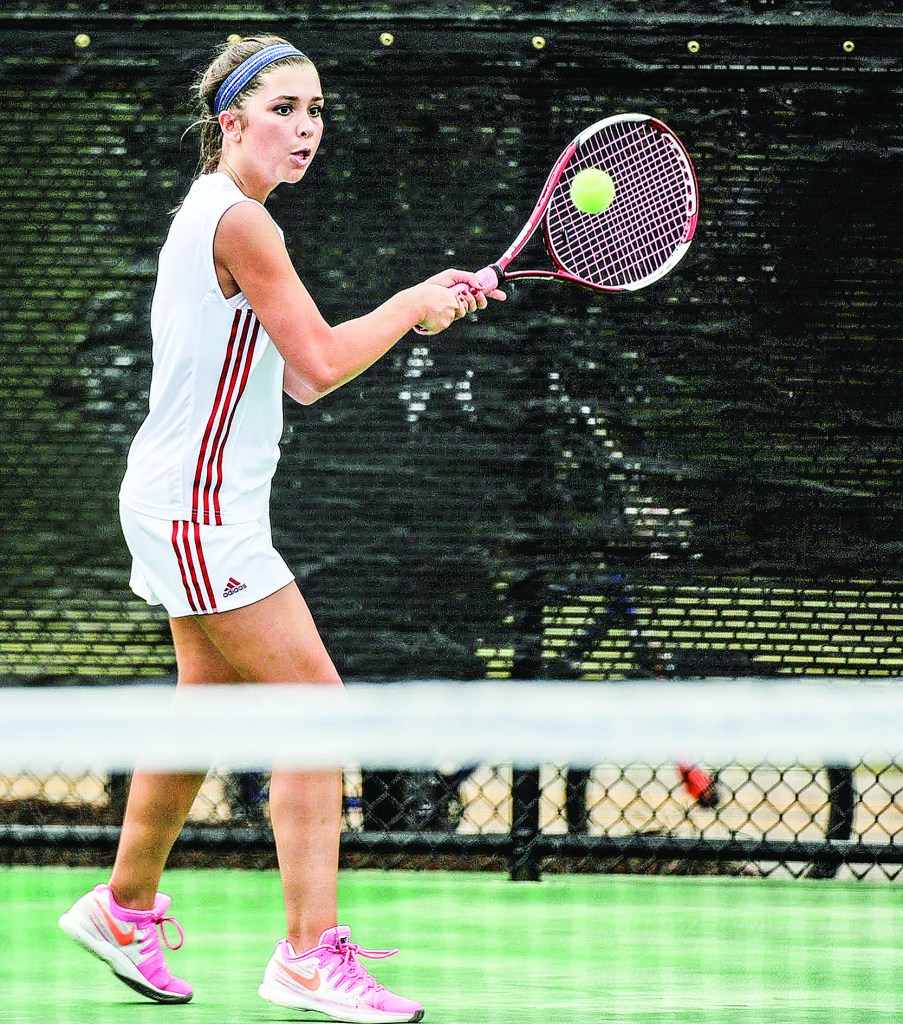 Lafayette’s Sadie Wilson leads a girls team that has every player returning from last season. The Commodores expect the experience to carry them to the 4A state championship that is being held in Oxford this year.

When the Oxford Parks Commission built the John Leslie Tennis Center, expanding its tennis community even more, the area high schools knew they were going to be able to take advantage of the new amenities.

Lafayette is getting the first taste of those advantages. The Mississippi High School Activities Association awarded the 4A state tennis championships to be held in Oxford in May.

The announcement means the Commodores can stay home instead of making the annual drive down to Ridgeland or any other surrounding tennis complexes in the Jackson area.

They just have to make sure they get there. It is a carrot Lafayette coach Debbie Swindoll does not mind dangling in front of her team as the season begins this week.

“All the time,” Swindoll said when asked if she brings it up to her team. “That’s been my goal the whole time since I’ve been here. Since I predominately teach (Oxford and Lafayette players) when they’re younger is to have both of them play for a state championship. We just didn’t know we were actually going to get it here. So that’s even better.”

Lafayette will start off on the right foot as they return every player on the girls’ team. In fact, Swindoll will have them for two more years as there are not any seniors on the team.

Swindoll has four juniors, including Abigail Arrington, Rachel Reed, Cara Anne Sallis and Sadie Wilson. All four have played varsity-level tennis since the eighth grade and give Swindoll a wealth of experience heading into the new season.

“My girls will be good,” Swindoll said. “We should be very experienced. … Experience-wise, I have a good many now that are kind of buying in to playing tennis other than tennis season and that comes with individual tournaments. The more that they do that I think just breeds to making better players.”

Swindoll also added one girl to her ranks as Alison Bowen came over from Oxford. The addition of Bowen adds another layer of depth when it comes to setting doubles teams for Swindoll.

The boys’ side sees the only two seniors on the Commdores’ roster. Noah Addy and Lee McLarty anchor the team with juniors William Carter and Treyton Odom as the lone juniors.

Lafayette does lose Nathan Hollis, who graduated last May. Hollis was the only member on the boys’ side who competed in the individual state championship tournament last May.

“My guys, I did lose three senior guys, so we’re going to be younger on the boys’ end,” Swindoll said. “I have some talent on the boys, they’re just younger. That’s the best way for me to kind of describe it.”

Swindoll is high on her two freshmen, Richard Childress and Dawson Welch. Foster Roush is the lone sophomore. Seventh-grader Hayden Williams and eighth-grader Cameron Barranco round out the team.

Bigger goals
With the 4A, 3A and 1A/2A championships being held in its own backyard this year, Lafayette would like to make it further than they did during the team tournament a year ago.

The Commodores did not make it to the finals at the Ridgeland Tennis Center but would like to have plans on May 9.

STATEMENT WIN: Rebels take down No. 2 Louisville to…