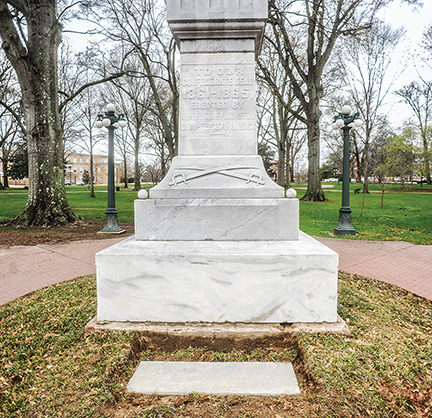 Bruce Newman Installation has begun on a plaque that will provide historical context on the Confederate statue that sits in Lyceum Circle at the University of Mississippi. Work is expected to be completed by the end of the month.

The director of Beauvoir, the last home of Confederate president Jefferson Davis, and a founding member of the University Greys says the University of Mississippi is violating the law if it plans to go through with placing a plaque to give historical context to the Confederate statue on campus.

“It’s a violation of the antiquities law since the university has not gotten permission from the Mississippi Department of History,” said Greg Stewart, an Oxford native and University of Mississippi graduate. “Besides being highly illegal, it’s also incredibly rude. It takes a lot of nerve to come behind someone else’s monument and smear your words on it. As if your words are appropriate at all.”

University Chancellor Jeffrey S. Vitter announced late last week the university is installing a plaque that will provide historical context for the Confederate statue at the entrance to Lyceum Circle.

“Our university has worked hard to recognize our history while also living up to our promise as one of America’s most hospitable, welcoming and inclusive institutions,” Vitter said in a news release. “The placement of this plaque puts this statue into proper context and affirms, as in our UM Creed, our respect for the dignity of each person.”

The campus chapter of the NAACP does not agree with the plaque, however, because the inscription on the plaque does not include slavery as the central issue to the Civil War.

“It is gross negligence to assume anything other than what the authors of that declaration stated were justifiable reasons for seceding from the Union,” the NAACP said. “Therefore, any academic institution decorated with Confederate monuments or iconography should wholly distance itself from these symbols of racial terror and properly contextualize the structures it cannot immediately remove with factually accurate historical context.”

Stewart counters that the monument was placed on campus in 1906 by the mothers, wives and daughters, “including William Faulkner’s mother,” to honor the soldiers who fought in the war, not to memorialize the Confederacy.

Stewart said the statue is not a monument to the Confederacy, but a reminder of the “Confederate veterans who went off to war and died or came back with only one leg or one arm.”

“The statue honors the sacrifice of the veterans who came back and worked in the fields to feed their families and learned to saddle a horse with one arm,” Stewart said.

Stewart, who will be the guest speaker of the University Greys for its Sons of Confederate Veterans meeting this evening at 7 p.m. at Pizza Den on Heritage Drive, is not alone in his assessment. Jon Rawl, who is with the University Greys, agrees with Stewart.

“Adding a politically correct plaque in front of the Confederate statute is an insult to the century-old campus landmark,” Rawl said. “The statute’s purpose has not changed since its 1906 dedication; memorializing the dozens of University of Mississippi students and thousands of Mississippians who marched to war and died.”

If the plaque is allowed, Rawl believes other campus landmarks should be altered as well.

“Since the UM administration has started a new trend, I suggest we add alternate plaques for other campus landmarks: the Walk of Champions sign should reveal that the AP and UPI polls have never placed Ole Miss football in the No. 1 final ranking; and James Meredith’s statute should indicate that Mr. Meredith opposed the monument’s placement,” Rawl said.

“All those people that may have convinced themselves this is the last thing they’re going to do are mistaken,” Stewart said. “They’ve taken one thing every two or three years and I will probably smirk a little bit when they take away the name Ole Miss and Rebels. That is clearly on the horizon and the school will have no special meaning or draw. But that is the high price we pay for gutlessness.”

He said that if the plaque is allowed to be placed, then it will start a dangerous precedent.

“If they are allowed to do it there, they’ll do it all over Mississippi. Not a single statue or monument is safe from being contextualized,” Stewart said.

Stewart has also been leading the way to have the current Mississippi flag put into the state Constitution to preserve it from being altered. He proposed the first ballot initiative when the state flag was voted on by Mississippians in 2004 and is leading the way with the current initiative known as Initiative 58 to get the required number of signatures to have it placed on the ballot in 2018. Those in opposition to keeping the Mississippi flag as it is are garnering their own signatures for Initiative 55, which would not allow the state flag to be placed in the state Constitution.

“Both of them are healthy citizen-involved devices,” Stewart said. “I think they’re out getting signatures and we are certainly getting ours. Initiative 58 will make sure your state flag does not get traded away in a back-room deal. That is our aim, to finally put it where they can’t get to it.”

Stewart admitted he is more concerned with the federal lawsuit that was recently filed against the state by private attorney Carlos Moore, who claims the state flag is a vestige of slavery.

“The federal lawsuit does concern me because if you are able to assign race to an inanimate object then that means every monument, street name or county name or anything associated with the Confederacy is up for grabs,” Stewart said. “It’s never happened before, but we are living in some odd times. But I’m confident the judge will follow the law.”

Stewart said he expects the Sons of Confederate Veterans to ask the governor to employ special counsel to assist Mississippi Attorney General Jim Hood in fighting the case.

“Not that I think AG Hood would take a dive, but to get him the extra help he may need,” Stewart said.