‘Walking Man’ greets as he trains for final marathon 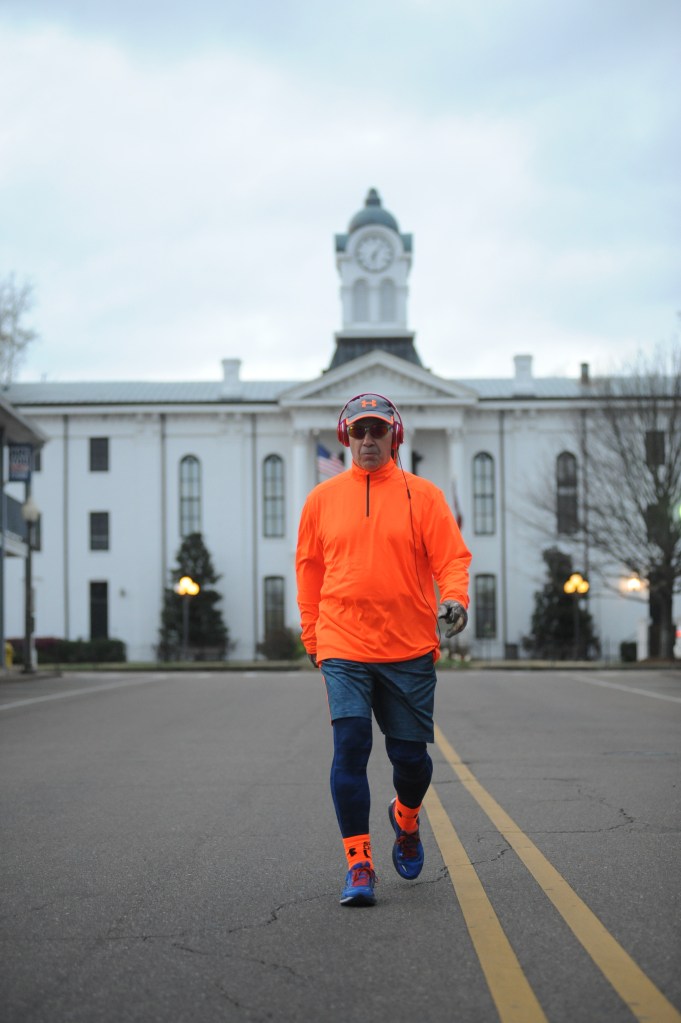 Anyone who has business on the downtown Oxford Square early in the morning, has most likely seen Rusty Nosser.

It’s hard to miss him. Dressed in neon orange, lime green or bright yellow running gear, Nosser greets passersby by pointing at them.

Sometimes he’s walking briskly, other times he seems to be dancing or jumping in the street.

What he’s doing is training. Nosser is a champion speed walker with several titles under his belt.

His next speed walking race is in June, and the 60-year-old says it might be his last official marathon race.

Nosser, dubbed the “walking man” by many, slowed down long enough recently to stop by The Oxford EAGLE office and talk about his speed walking and why fitness and fellowship are two of the most important things to him.

Raised in Vicksburg, Nosser enjoyed all forms of sports as a child and into his teens.

“I religiously exercised every day,” he said.

He came to Oxford to attend the University of Mississippi where he majored in market- ing. He didn’t play on any of Ole Miss’ athletic teams but he continued his quest to remain fit. He graduated and returned to Vicksburg where he worked in the supermarket business. After spending some time in the Carolinas, he returned to Oxford in 2004 to semi-retire.

In 1979, he got shot in the eye while duck hunting, which has left him blind in one eye.

“I’ve had seven surgeries and flew all over the country trying to restore the sight in that eye,” he said. “But it was to no avail.”

He enjoyed relatively good health otherwise until 1990 when he suffered a serious kidney infection which caused him to be in ICU for several weeks.

His healthy lifestyle, he says, helped him rebound and he continued to exercise each day, whether it was walking, running, swimming, tennis or playing a game of basketball at church. However, he often wonders what might have been if he hadn’t lost part of his vision.

About five years ago, and after 29 years of marriage, Nosser found himself divorced and without something to keep his mind busy and to fill the void. It was his former, and late brother-in-law who suggested Nosser take up competitive speed walking.

“He told me I ought to try it,” Nosser said. “He and his wife used to do walk-a- thons and thought I’d be a natural at it. He was right. Turned out, I had a knack for it.”

He started taking part in local walk-a- thons and speed walking races. He moved into marathon races in various states across the country. Most recently, in May 2015, he won the World Cup marathon. He was invited to compete in another World Cup race sponsored by ESPN in July in Texas where he took first place again, at 59 years old. Each race is 26.2 miles and takes about six hours to complete.

“One of the announcers from ESPN called me a natural born athlete,” Nosser said. “He said I have a God-given talent. Maybe I do, maybe I don’t. But I treat it as such and am grateful for the chance to live a dream.”

“I get up, drink some coffee and eat breakfast — which is important to do,” he said. “Then I go out walking.”

He goes out every day, unless it’s pouring down rain. He puts on his neon-colored clothing to keep him visible in the early morning hours and dons headphones. He has hundreds of songs he listens to while he trains. Most of the songs he picks for their beat and their motivational words, like “Eye of the Tiger,” “Born to be Wild,” and “Walk of Life.”

“When people see me moving and dancing, I’m feeling that beat and it motivates me,” he said. “When I get into a rhythm, I cut everything else out. I get tunnel vision. Sometimes people stop me to talk. They tell me I look like I’m having fun and ask what I’m doing and why I’m doing it. People wave to me and I point to them. It’s my way of saying, ‘Hello, I recognize you.’”

Nosser occasionally gets a honk since he often walks in the street around the Square.

“I walk in the street because when I’m racing, I’m racing in the street,” he said. “When you train, you want to simulate what you do during the race.”

He walks about 8 to 10 miles a day. He’s currently training for the X Games in Austin where he hopes to gain a gold medal and end his speed walking racing career on a high note.

“You have to know when Father Time hits you,” he said. “I will always exercise, but competition is different. I’ll do some local races for fun. But when you’re on ESPN, you better be in shape. I’ve done this hot and heavy for almost six years. The enthusiasm is there. But I’m starting to feel it.”

He often gets stopped by people on the Square to pose for pictures. He enjoys the fellowship and the new friends he’s met. He also loves that he’s beaten the odds and that it’s his passion for life and fitness that have kept him going.

“I love it,” he said. “I love competition and exercise. If you love something, you’ll persevere I have a passion for it. I don’t look to do it for trophies. People said I couldn’t do it. But I never doubted myself.”

So what’s next for the “walking man” after his final competitive marathon?

Nosser said he’s been approached about doing a movie on his life as a speed walker. “I can’t say much right now about it,” he said. “But they apparently see it as a comeback story. I guess I did make a comeback. I just never expected it to be when I was 60.”