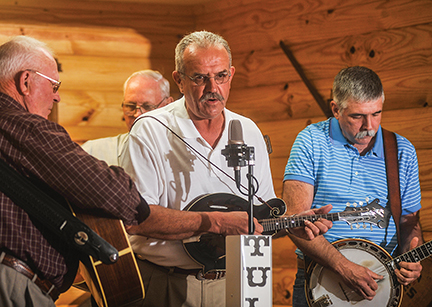 Those were words of Lafayette County road manager Jerry Haynie after the Board of Supervisors approved his retirement during its meeting Monday night. Haynie will be retiring at the end of June after 26 years working for the county.

“I certainly appreciate the work you have done for this county,” board president Jeff Busby told Haynie as he addressed the board.

“I’ve been with the county a long time,” Haynie said. “I appreciate y’all and I appreciate the administrations and different boards. It’s very hard for me because you have to kind of live this job. I thank the citizens of this county. There’s some great people here. I have really enjoyed meeting them all over the county. But I’m not gone yet. We’ve still got a lot of things to do.”

County engineer Larry Britt has also been working for Lafayette County a long time and has worked with Haynie for quite a while.

Haynie said he began working for the county in 1970 on the road crew. He left after a few years, but then returned in 1990 as the county shop foreman when he began the county maintenance shop.

“Me and my wife have discussed this and prayed about it,” Haynie said.

He said the worst part about making his announcement is informing his employees of his decision.

“Some of them I’ve been with 20-something years,” Haynie said. “I’ve got 44 employees out there and you get close to them.”

Haynie said it took him awhile to come to the decision on retirement.

“It really did take a while because one side of me wanted to stay and one side of me knew it was time. It was just a hard toss-up,” Haynie said. “I’ve had to pray about it a bunch. I really have. Had to ask the Lord to guide me to make the right decision because when you have worked all your life and all of a sudden you get to this point, it’s kind of scary.”

Once he does retire in three months, Haynie said he has plenty to do around the house.

He said he has no plans to go back to work somewhere else, but will remain busy.

As far as the work he has helped accomplish in the county, Haynie said making roads and bridges safer is at the top of the list. But he’s also proud of the employees who have worked with him and their ability to do what a lot of other county road crews cannot do in Mississippi.

“We build our own roads,” Haynie said. “We do our own asphalt paving projects and state-aid projects. Very few county’s can do that.”

He’s also proud of the way his crews have handled themselves and has instilled a sense of pride in their work and who they work for.

“I’ve always told them to poke their chest out and be proud of where you work,” Haynie said.

Hughes puts foot down at capitol