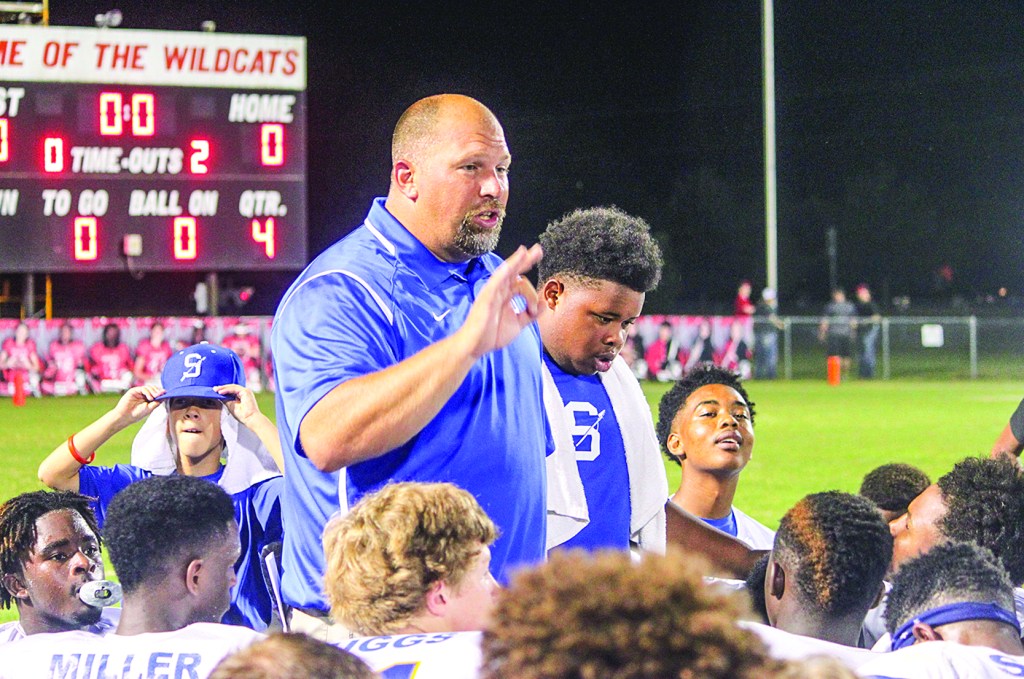 Lafayette football coach Michael Fair said the expectation for his first Commodore team to compete for the MHSAA Class 4A championship. Fair will take the field with his new team when Lafayette begins spring practice later this month. (Brian Lentz)

Michael Fair on Wednesday met with his players at Lafayette for the first time since being approved as Eric Robertson’s replacement Monday night, and he isn’t shy about exactly what he wants all of them to accomplish together this fall.

“I can go ahead and tell you right now, our goal this year is to win a state championship at Lafayette,” Fair said. “That will be what all this goes into, and that will be our goal. We’re going to do everything we can to try to get there.”

Fair can say that because of a proven track record of competing for state titles at his new school, something that wasn’t necessarily the case at his old one. Fair went 16-7 the last two years at Senatobia, turning around a program that had three straight losing seasons, including a 1-9 showing in 2013, before he took over.

The expectations are different at Lafayette, which has won two MHSAA Class 4A titles and played for another since 2010. It’s the kind of tradition Fair embraces and one he said prompted him to contact schools officials last month to express his interest in the job once Robertson accepted an offer to be Madison Central’s defensive coordinator.

“I’d just tell (fans) that we’re going to have high expectations at Lafayette, and they already do,” Fair said. “I understand that, and I understand the importance of the football program at Lafayette High School.”

Fair will take the field with his new team for the first time when the Commodores open spring practice April 25. That’s when he’ll start installing a spread offense he said is similar to the run-first attack Lafayette ran under Robertson but with various paces depending on the situation.

“The thing is we want to play very fast, but we want to play as fast as we want to,” Fair said. “We don’t want anyone else to determine the tempo we want that we’ll play. We have different speeds we can go whether it be no-huddle or sometimes we will huddle.”

Balanced plan
But Fair said he wants his offense to be unpredictable with a passing game that can strike at any time to create balance, something the Commodores struggled to do at times with their zone-read scheme in recent years.

“I think definitely just assess the personnel, but what I would like to do is throw the ball when I want to and not wait until I have to,” Fair said. “Use the passing game to get the box count to where it needs to be, loosen up the safeties and try to get the numbers that we can block instead of having to wait until the down and distance determines your play calls.”

Fair will also look at playing a four-man front on defense as opposed to the 3-3-5 stack the Commodores ran under Robertson, though he said he’ll have to evaluate his personnel on both sides of the ball before making those kinds of decisions. Lafayette lost 2,000-yard rusher Tyrell Price, offensive linemen Eli Johnson and Jordan Jamison and leading tacklers Quin Jones (111) and Vincent Lewis (96), but the Commodores have quarterback Will Ard back for his senior season.

Fair first wants to make sure he continues another tradition that’s been synonymous with Lafayette over the years.

“We want to be a physical football team, which Lafayette has a tradition of being very physical,” said Fair, an offensive lineman during his college days at Mississippi State. “I think the line of scrimmage is very important to the outcome of the game, and we definitely want to win there.”

Fair preceded his time at Senatobia with a six-year stint as the head coach at Pillow Academy, leading the Mustangs to the MAIS AAA Division II title in 2010 while playing for another in 2009.