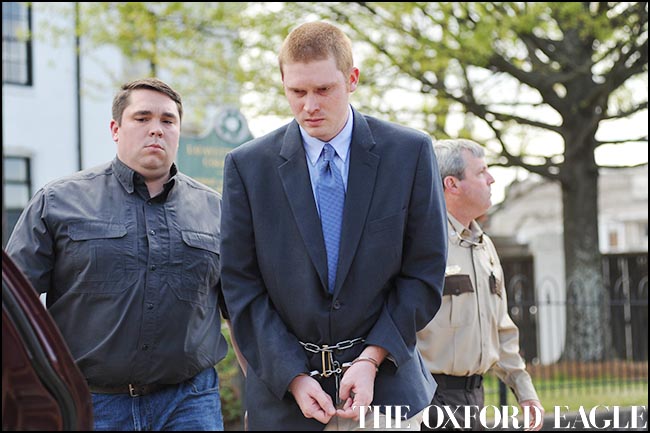 Bruce Newman Derrick Boone is escorted from the Lafayette County Courthouse on Thursday. Boone pleaded guilty to a murder charge in the death of Zacharias Hercules McClendon and was sentenced to life without parole.

Derrick Boone was sentenced to life in prison without the possibility of parole on Thursday afternoon for his role in the murder of University of Mississippi graduate student Zacharias Hercules McClendon in 2013.

Boone, along with his attorneys, stood before Judge John Kelly Luther as he explained his options moving forward. Luther told Boone if he pleads guilty, he will not be able to appeal the conviction and would be left with two options: life in prison without parole and the death penalty. Prosecutors elected to take the death penalty off the table and Boone entered a guilty plea.

It was an emotional event for families on each side of the aisle tears overcame the front row as the judge spoke. Luther accepted Boone’s guilty plea, declaring him competent and entering into the plea willfully. He spoke of the impact of the decisions made by youth and the lasting ramifications they can have going forward.

“Some ways I feel sorry for you and some ways I don’t,” Luther said. “I regret that we are in this situation today.”

The murder took place on Dec. 18, 2013 in McClendon’s apartment at 20B County Road 140 just off of College Hill Road in Oxford. According to the state, Boone, along with Steven Wilbanks and Joseph Lyons, entered their neighbor McClendon’s apartment and Wilbanks shot him in the back of the head with a 16-gauge shotgun. The state also claims the three men then stole McClendon’s 2004 Nissan along with clothing, electronics and textbooks, selling the latter.

Following Luther’s address to Boone late Thursday afternoon, Boone requested to speak to McClendon’s family in an unprepared statement. Teary-eyed and flushed, Boone turned and addressed the family before being led away by sheriff’s deputies.

“I’m sorry that this has happened,” he said. “I hope you all the best and can live your lives as happily as can be possible.”

Before Boone elected to accept the prosecution’s offer of a life sentence in exchange for the guilty plea, Wilbanks testified outside the presence of the jury, that he, Boone and Lyons were all aware of his intent to shoot McClendon.

During opening statements, defense attorneys said Boone didn’t know Wilbanks was going to shoot McClendon when the three walked over to his apartment.

“Once the parties ascertained … that Mr. Wilbanks’ testimony would be unfavorable to Mr. Boone and was unsolicited or bargained for by the prosecution, Mr. Boone elected to accept the prosecution’s offer of a life sentence in exchange for a guilty plea to the capital murder charge,” said Roy Percy, one of Boone’s attorneys on Thursday.

Wilbanks had previously denied testifying at the trial against Boone and involved his 5th Amendment rights. However, he sent word to the court on Thursday he was willing to testify if called as a witness.