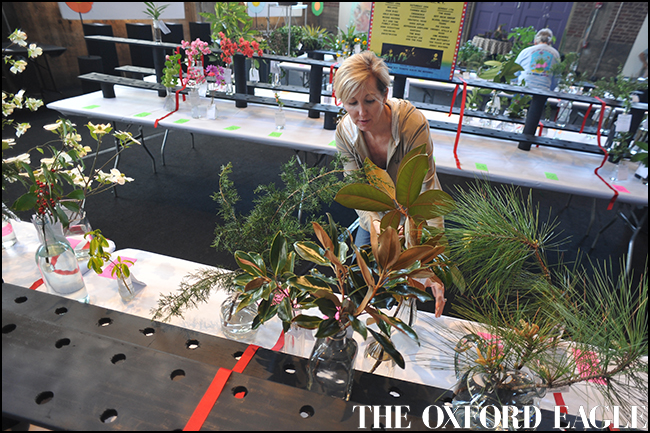 Elizabeth Fisher sets up for The Garden Club Flower Show at the Powerhouse last April. Every spring the club has its annual show.

The Oxford Conference Center will turn into a gardener’s paradise April 21 for the Oxford Garden Club’s free horticulture extravaganza.

“Life’s a Garden … Bloom Where You’re Planted” will be from 1 to 5 p.m. and features more than 300 horticulture exhibits, a plant sale and more.

The club’s more than 50 members have planned flower shows in the past, but this will be the first year for a horticulture-only show, and club member Barbara McIntosh said the community is getting involved after months of planning.

“Students from the Rowan Oak Junior Gardeners are also doing educational exhibits for the first time, as well as entering plants that they have tended to for over 90 days,” she said. “Each Oxford Garden Club member will exhibit horticulture specimens that they have grown in over 80 classes of different horticultural species.  This year we are expanding the horticulture division of the show by adding a plant sale, as well as including several vendors. There will be produce for sale from Midtown Farmers Market, beautiful homemade baskets, wildlife photography, gardening items and much more.”

The Lafayette County Master Gardeners are getting involved and will be on hand to answer gardening questions and provide horticulture education. Educational exhibits on “Save the Monarch” and “Bee Aware” will be on display.

McIntosh said those attending the event should pay special attention to the numerous awards that will be handed out during the show.

“Some of our special club awards include memorial and honorary awards, the Blooming Gardener, Garden Goddess, Distinguished Gardener and Green Thumb Awards,” she said. “The Top Exhibitor Awards will be presented to the highest-scoring, correctly named blue ribbon-winning exhibits from different horticulture sections in the Horticulture Division. There are 11 top exhibitor horticulture awards for over 80 classes of specimens, as well as educational awards in the Special Exhibits Division. The Little Green Fingers Award will be presented to the youth winner in horticulture.”

McIntosh said the Garden Club’s events are often a big hit in the community, with hundreds coming out to learn and have fun. In the past shows have had themes and created a festival-like atmosphere in town.

“Anyone who has an interest in gardening, eating, nature, planting vegetable patches, decorating, purchasing new plants or seeing beautiful horticulture specimens exhibited will enjoy this show,” she said. “We are inviting the public to attend to view all the plant specimens and the items that the vendors will be displaying for sale.”

It’s not too late to get out in the garden, and the show is the perfect time to brush up and get excited about your yard.

“Our shows are generally held in April when spring has arrived and many plants are at their prime,” McIntosh said. “Early springtime is the ideal season for preparing the soil, fertilization, pruning overgrown bushes, putting new plants in the garden and planting of crops.”

McIntosh said most important this year is the show’s theme, which should inspire residents inside and outside of the garden.

“We can cultivate life’s blooms and sow seeds of kindness wherever we are,” she said. “And as gardeners, or conservationists, or just dreamers, we value the rich heritage of our land and strive to beautify our surroundings. As gardens change with the season, so does life constantly change. We must learn how to adapt and sustain our environment and all its creatures. We must learn to grow and grow to learn.”