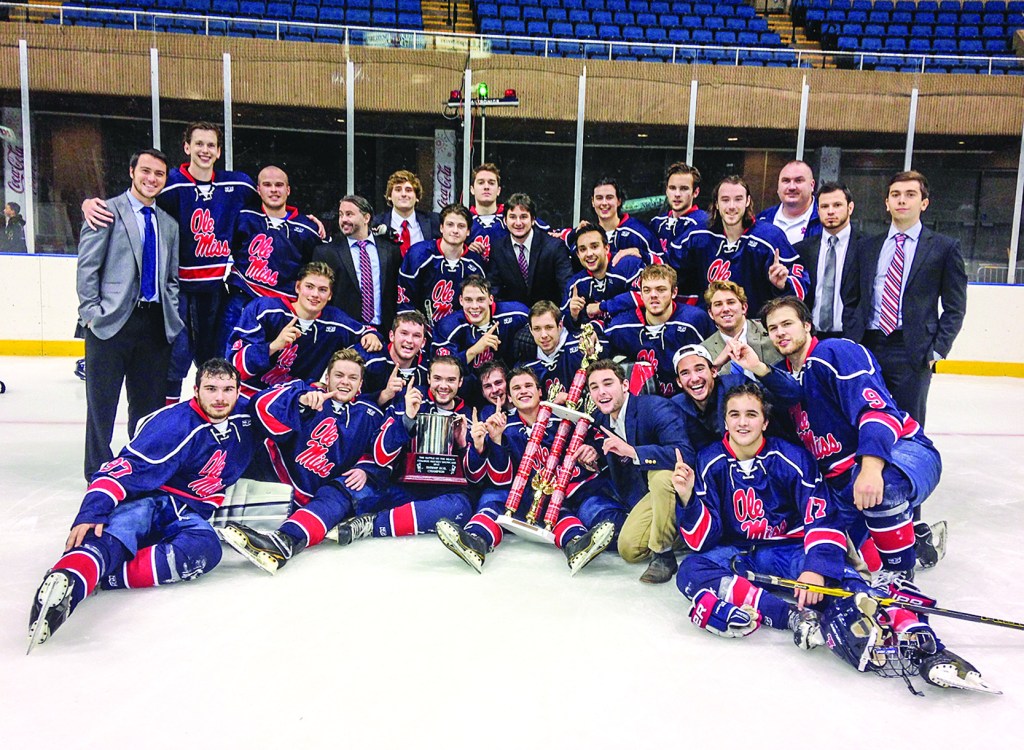 The Ole Miss hockey team has been a regular participant at nationals in recent years. (Ole Miss Hockey)

Ole Miss hockey players may be the most dedicated and yet least appreciated team athletes at Ole Miss.

Many in the Ole Miss community may be surprised to learn that this team has gone to nationals three of the last four years. That is, they have achieved a place among the best in their region at the American Collegiate Hockey Association (ACHA) tournament, making the final four in their region. The U.S. is divided into four ACHA regions with a total of about 150 teams.

Team members are entirely responsible for this annual budget which they pay through dues of $2,000 per player, engaging in fund raising events and getting financial support from community members and businesses such as The Library Sports Bar in Oxford. John Desler, owner of The Library, is a major benefactor.

“Without his help, the team could not exist,” says Angelo Rosena, team general manager. During recruiting drives by the hockey team Desler covers much of the expenses according to Rosena. Other major expenses that must be covered are equipment, uniforms, transportation to away games and hotels.

Student-run
The team is run by five student-player board members, including a general manager and treasurer. It gets no funding from the university. The team plays 25-30 games per year from September to mid-March.

The Mid-South Ice House in Oliver Branch is their home ice for all but a few games that are played at the BancorpSouth Area in Tupelo. The biggest game of the year is usually the match with rival Mississippi State.

It is clear in talking with faculty advisor and Professor of Journalism Nancy Dupont that in her experience she sees every player as having incredible passion for the game.

“I have become a dedicated fan of theirs. I have traveled with them to regular season games and have been with them during all three of their national tournaments in Missouri, Florida and Alabama” Dupont said. She has been a fan of the team since she her first year as faculty advisor back in 2009.

As witness to that team  dedication, Dupont said, “The number one challenge to the team is traveling out of town to practice. No other team on the campus has to go 50 miles away … to practice the sport. That is amazing to me. And they have to practice until 10 or 11 at night.” They have to keep their studies up, there’s not a lot of free time in their schedules.

That is unusual dedication; and then add in the part where they have to pay to play. So that means they have to have extremely dedicated families that support them.” It shows that players truly take ownership of the team.

And yet they still make time to give back to the community, like running a two week hockey summer camp for young kids in Memphis. Rosena, a former player, is a Recreation Administration major at Ole Miss who hails from Hamilton, New Jersey. He has been playing hockey since he was not quite as tall as a hockey stick. He started playing street hockey when he was about 11 years old. Then one Christmas his folks gave him a pair of hockey skates, and he’s been on the ice pretty much continuously ever since. He played in travel leagues, “rec’” leagues, and throughout high school. He said his parents had to drive him to practices at 4:30 a.m. during his high school years and to away games all over New Jersey.

After high school, he was determined to continue playing hockey so in searching for colleges he found Hudson Valley Community College in Troy, New York. That part of upstate New York is a hockey mecca, with two minor league teams in the area. Rosena says he loved his years at HVCC.

“They had a great field house (hockey arena), we had our own locker rooms, medical facilities and all of our equipment and other expenses were covered, once we made the team,” he said. He said during his years at Hudson Valley they traveled to and toured Lake Placid, site of the 1980 Olympics “Miracle on Ice”, and played a team in nearby Saranac Lake.

He said the guy who recruited him to come here, Colin Knight, really convinced him it would be a great place to play. Rosena played Ole Miss hockey until an injury caused him to quit active playing a couple of years ago. He then became the assistant coach, head coach and is now general manager. The newly created position of general manager became necessary due to the teams growth. He estimates that, during the season, he spends 15-20 hours per week on hockey related work while still keeping up with his studies.

Oxford by way of N.J.
Cameron Cook is an International Marketing Communications grad student at Ole Miss. He also got his undergrad in Broadcast Journalism at U.M. He is from Long Hill, New Jersey.

Cook played out his eligibility (last year) at Ole Miss and now handles all of the social media and broadcasting of the games – “streaming over the web to the world” as he puts it. The team has about 2,800 Twitter follows and more on Periscope, a live video streaming platform. He said he spends an average of 20-35 hours per week on team related activities.