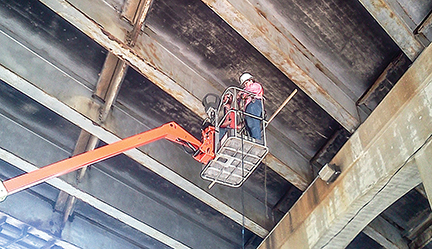 University of Mississippi UM civil engineering professor Elizabeth Ervin inspects the University Avenue bridge for weaknesses in this May 2013 photo. The bridge will be closed for four to six weeks to make some necessary repairs.

Public Works Director Bart Robinson asked the Oxford Board of Aldermen Tuesday, on behalf of the university, to approve closing the road to allow the university to make the renovations to the bridge, which will increase its weight limit.

The project includes striping and repainting the steel beams, replacing some bearing devices, adding steel plates to the beams and rebuilding the expansion joints.

In a letter to the city from UM Director of Facilities Ian Banner, he states, “In order for this work to be accomplished during the summer break, it would be advantageous for the contractor to have uninterrupted access under the bridge.”

Banner said the work to the bridge could be completed “safely and expeditiously,” if Gertrude Ford Boulevard was closed.

“I’m not sure of their exact detour plan at this moment, although I suspect they will have closure signs up at both ends of Gertrude Ford,” Robinson said. “And I would assume through-traffic will be allowed to pass.”

University Avenue will not be closed during construction. Instead, the area of roadway between Old Taylor Road to the Circle will be reduced to two lanes and one sidewalk. Traffic will be allowed over the bridge during construction, however some temporarily closures could be possible.

Robinson said the university came to the city in November asking to have the road closed for the renovations. They were given a two-week time frame to complete the work. The university only received one bid that was much higher than the university budgeted.

“When they contacted other contractors who expressed interest in bidding originally, they were told they just couldn’t complete it in that time frame,” Robinson said.

While four to six weeks is a considerable amount of time, it would be during the summer months when the students are mostly gone. The aldermen voted to approve the road closing; however, Alderwoman Janice Antonow said she would like to see a copy of the university’s detour plan.

“I know I was planning to use that bridge everyday,” Antonow said.

Urban development to be discussed at UM