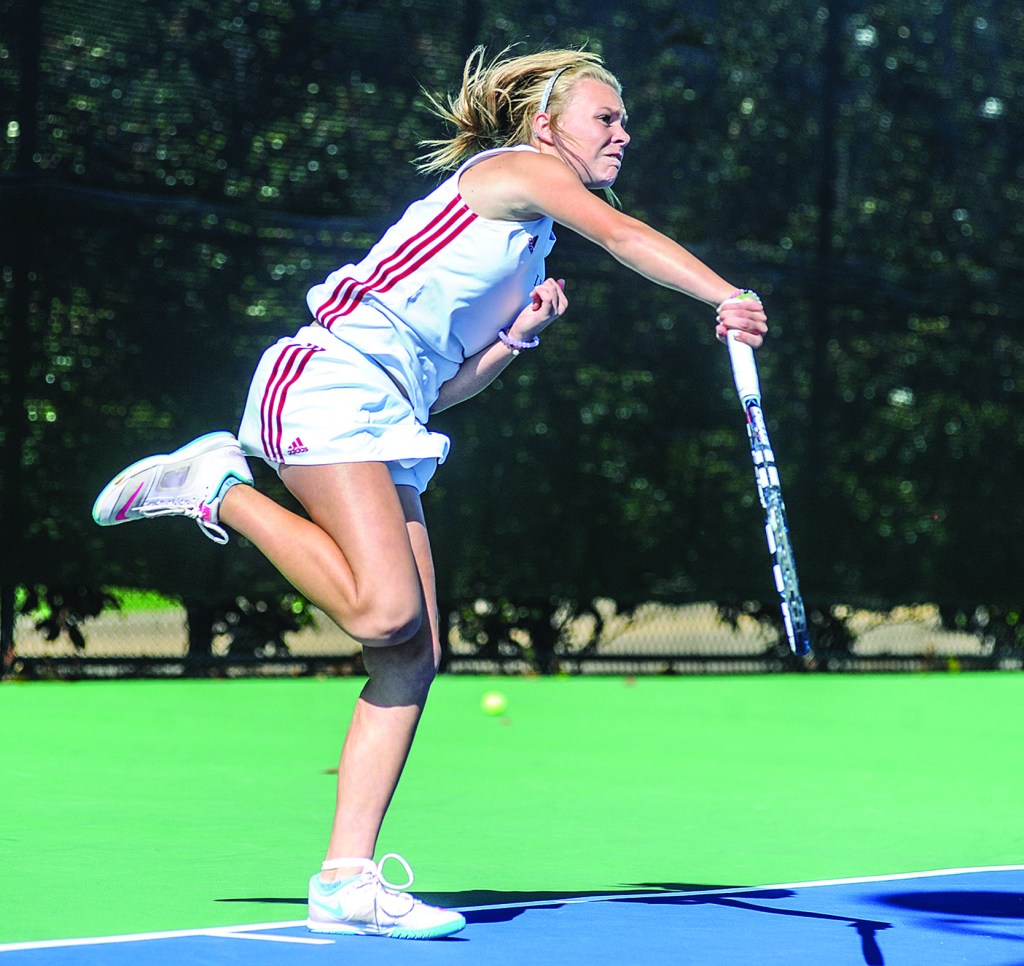 Lafayette’s Ally Bowen plays against New Albany in the MHSAA Class 4A North Half match at the John Leslie Tennis Courts in Oxford on Thursday. Bowen earned the Commodores’ lone point in girls’ singles as Lafayette lost 6-1.

The Lafayette High tennis team’s lengthy run in the MHSAA Class 4A playoffs came to an end against a perennial power Thursday.

The Commodores fell to New Albany 6-1 in the North Half finals at the John Leslie Tennis Courts. Eighth-grader Ally Bowen claimed the only point for Lafayette in girls’ singles with a 6-1, 6-2 victory over Rachel Rainey as a veteran lineup won out for New Albany, which will play for its fifth straight 4A title next week.

“I knew going in it was going to be a tough battle for us, an uphill climb,” said Lafayette coach Debbie Swindoll, whose team also faced New Albany in the regular season as region foes. “I think we competed better today than we did earlier in the year against them, but they’ve just got a lot more experience and age. And it mattered.”

Dawson Welch fell to Chris Shands 6-0, 6-1 in boys’ singles while Noah Addy and Lee McLarty, the Commodores’ only seniors, dropped a 6-0, 6-0 contest to Michall Crotts and Roberto Valadez in boys No. 1 doubles. Will Carter and Foster Roush dropped the boys No. 2 doubles point with a 6-2, 6-1 setback to Trace Thompson and Grayson Godbold while Barrett Childress and Sadie Wilson lost 6-1, 6-0 in mixed doubles.

The most competitive matches came in girls’ doubles as Abby Arrington and Rachel Reed fell 6-4, 6-2 to Katie Davis and Mesha Van at No. 2. Emma Wilson and Halle Moore fell at No. 1 with a 6-2, 6-2 loss to Laura and Maggie Creekmore.

With most of the players returning from just the second team to advance to North Half during Swindoll’s tenure, Lafayette’s expectation is to have the same amount of success next season if not more.

“I told (our players) this,” Swindoll said. “I said, ‘I’m proud of you, but I want you to remember what it feels like when you lose in the North Half and let it challenge us to be better and get better so that we’ll be in this match and be able to win the match.’

“We’re in good shape, but I hesitate to even tell them that because you’ve got to work at it. You’ve got to get back to work tomorrow on it.”