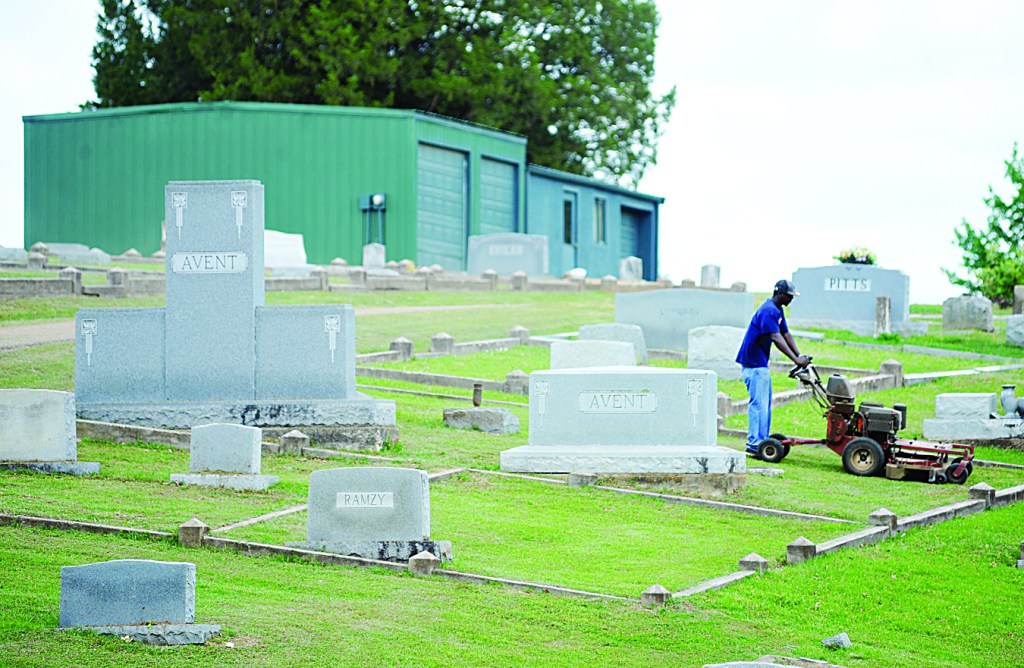 City officials want to tear down the shed at St. Peter’s Cemetery, pictured here in May 2014, and replace it with a columbarium.

Members of committees make things happen in Oxford in today’s installment of yesterday’s papers. There was action in courtrooms too over some big cases. See these excerpts from 2014, 2003, 1994, 1985 and 1942.

At least one member of the Oxford Historic Preservation Commission was amazed by the site plan for a columbarium inside the Oxford Memorial Cemetery.

The city-owned cemetery is proposed to have 813 niches and be about 9 feet high, in a 45-foot by 55-foot area. The columbarium will be in three sections, forming a partial square. Benches and flowers will be present.

The fate of a Walgreens store planned for the longtime location of Lafayette County Farm Supply hinges on city approval for a second entrance on South 18th Street.

Developers have asked the city to rezone a quarter-acre lot behind Texaco from single-family residential to general commercial.

The project’s future is unclear given the Oxford Planning Commission voted 4-2 Monday to find an alternative to rezoning that may accommodate the development and protect the neighborhood’s charm.

Poet spells out remedy for Ayers case in testimony

Award-winning poet Margaret Walker Alexander was the first witness called in the Ayers trial, which began Tuesday in the U.S. Court for the Northern District in Mississippi.

Alexander said the remedy to cure discrimination in Mississippi’s schools was more funding for black colleges, not closure of schools.

Today’s Oxford municipal primary elections are taking place as scheduled after a federal judge declined to issue a temporary restraining order blocking them.

Attorneys for Beatrice Houston, Debra Carothers, Brenda Armstrong and Mildred Quarles filed a restraining order after the women filed a lawsuit July 12, 1984, asking the city to throw out the at-large district in the voting ward plan.

“We are going by state law. We have no other choice,” said Mayor Leslie. “We tried the best we could to give them a ward with a lot of black voters, but no black candidate came forward. We feel we have done what we can; now the judge must decide.”

Oxford property owners are assured of a fire insurance rate reduction of about 20 percent, and possibly considerably more.

R. H. Tucker of the State Rating Bureau said while checking the city’s water pressure, new high-pressure pumps at the power plant and other firefighting equipment.

Oxford has moved from ninth place (the bottom), into eighth in the stat rating due to the recent big WPA project that enlarged many of the city’s water mains, cleaned them and extended some.