The Jefferson set to open 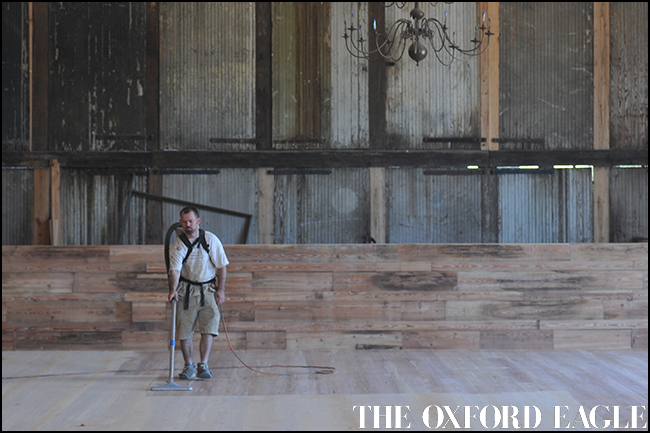 The Jefferson, a more than 18,000-square-foot event venue located on Highway 6 East, will make its debut this week when it hosts the annual Oxford-Lafayette County Chamber of Commerce gala Thursday evening.

This week is the grand opening for a new event venue in Lafayette County.

The Jefferson, a more than 18,000-square-foot building situated on 90 acres just east of the Oxford city limits at 365 Highway 6 East, will host the annual Oxford-Lafayette County Chamber of Commerce gala Thursday.

Then it will kick off other events, like weddings, retreats, reunions and more. Co-owner Tom Green III said his two employees at the facility already are taking reservations.

How it all began

Green, who has two daughters attending the University of Mississippi and will have a third there next year, attended a party last year in Oxford.

“We had a party in a building downtown and it was shoulder to shoulder, so I figured there was a need that there needed to be a place where people had room to visit, yet they could dance, and they could go somewhere to socialize,” he said.

So that began the pursuit to find a perfect spot for a venue.

Green, a Germantown, Tennessee, resident who grew up in West Point, is no stranger to renovation projects. He has a property in Byhalia that hosts weddings and he has been renovating homes since he was a teenager with his first projects being an old church and a dogtrot house.

“My father used to tear down old buildings when we were kids growing up,” he said. “There was an old Stovall house in Clay County that was 150 years old and somebody gave it to my dad to tear down and he said instead of tearing it down we were going to move it. We moved it 15 miles out into the country and put it on a hilltop.”

The carpenters said to tear down the house, but his dad said no. After about a year of the house just sitting there, Green decided he would fix it up. He worked on it after school and during summer breaks for five years.

“I didn’t have much patience as a kid, I used to have a hot temper,” he said. “But when I started having to cut sheetrock at an angle to fit a perfect wall, and put lumber that was not actually straight, from being old, it just taught me a lot of patience. I learned a lot from that.”

He went through some more renovation projects and also created a house out of a barn. The projects gave him some practice using what he had laying around from old projects or what friends gave him.

“The neat thing about this building here is we are using up things we have been saving for years,” he said. “We have slate roofing in part of the building here on the inside that I can remember as a kid my father making me move it from one side of the warehouse to another side.”

Other unique reused items at the venue include

• Windows came out of a textile mill in Pelzer, South Carolina

• Old brick came out of a federal compress cotton warehouse in Covington, Tennessee

• Roof decking came out of Pennsylvania. The decking used to be vinegar vats that they used to make apple cider vinegar.

• Maple floors came from of a textile mill’s production floor in Danville, Virginia

• Other flooring is antique heart pine

• Chandeliers came out of a church in Memphis, Tennessee

• About 10,000 bricks around the building say Oxford

• The exterior part of the building came from a temporary building at the Nissan plant in Canton. They went and took it down and put it back up. The top is all white. And it’s insulated all the way around with a wood grain texture on the outside. It took 10 days to take it down, two weeks to concrete it and put it back up.

“Tom has managed the reclamation of materials from millions of square feet of old textile mills and barns in numerous Southern and Mid-Atlantic states,” said co-owner and sister Margie Schloesser. “This project has given us the opportunity to use many stunning materials that we’ve been saving for years.”

Other features that aren’t necessarily reclaimed are a brick sidewalk along the 8-acre lake, 60 crape myrtles lining a driveway to a lot that fits more than 400 cars and a stage and archway that was modeled after a Hallmark movie.

“The venue is designed so that it is several rooms broken up to where you can have a small party and shut some doors and be comfortable,” Green said. “Or you can open up the place and have a large gathering.”

Green said even an outdoor venue in the middle of the extreme summer heat will be pleasant.

“We turned the building at an angle so that in the afternoon our courtyard is completely shaded,” he said. “That works out great in the summertime heat. We used the height of the building to cast a shadow also.”

While Schloesser lives in Park City, Utah, she has visited the location and is excited to come see it complete.

“We’re excited about the opportunity to help expand Oxford’s growing hospitality business,” she said. “The Jefferson will be able to host both large wedding ceremonies and receptions as well as intimate fireside dinners. Tom has another event venue, Mallard’s Croft, that is just south of Collierville, Tennessee. For the last two years he has been hosting parties and weddings in a barn that he remodeled at that location. During that time he has come to enjoy being in the hospitality business — it is such a pleasure helping others have fun and make memories at their special event.

“We hope to extend that same pleasure at The Jefferson by providing a venue where wonderful memories can be made.”