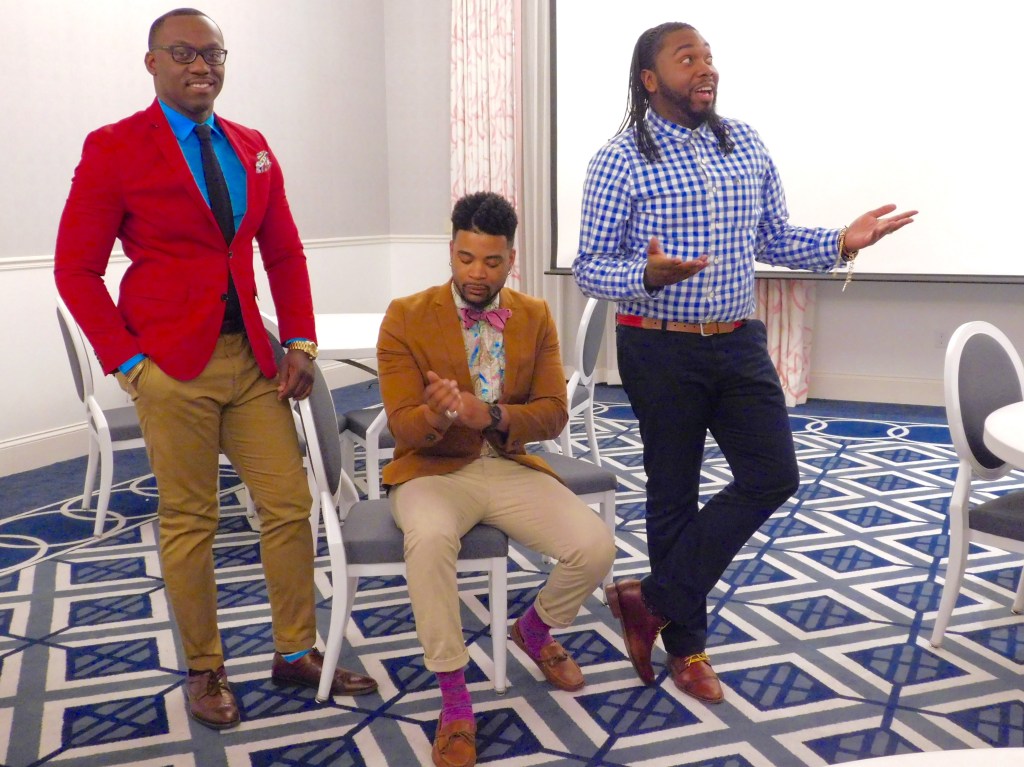 By Anthony Dicandia and Olivia Wells

President John F. Kennedy famously said: “Only those who dare to fail greatly can ever achieve greatly.” And for most entrepreneurs starting a company, failure is something they must face like a charging bull.

Brandon McClellan, Jawan Elliott and Brandon “Buddy” Brannon, the creators of FoxTrot Collection, aren’t afraid of failure. In fact, they’re prepared to fight it. With McClellan’s military background, the clothing collection functions with precision and discipline.

McClellan, who said he’s always been interested in fashion, began researching T-shirt material, screen-printing equipment and design work. “I had no idea what I was doing,” he said. “I didn’t know how to use Illustrator or Photoshop or any of that stuff, but I taught myself.”

McClellan has paid for almost everything out of pocket to start the business. He said he’s prepared for financial challenges. Learning the financial aspect of business made him realize how serious he was about the venture.

“It started out as a hobby,” he said, “but after I built the foundation, the background work that people don’t see, as far as permits and taxes — once I got a hold on all that, I realized I’m really into it now.”

Jawan Elliott, FoxTrot’s marketing manager, said the company is dedicated to giving the customer something of value.

“We dig into a lot things, but we’re not rushing,” Elliot said. “We take our time with whatever we’re doing because we want to make sure everything is the best quality when we bring it to you. We don’t want to put out a whole lot of stuff just to say we’ve done that. We want to make sure we actually have quality products and make sure our customers are satisfied with everything we do.”

Elliott said the creators are careful when it comes to potential investors and implementing financial strategies. They try to handle most of it themselves. “We want everything to be where we want it to be before we start expanding,” Elliott said. “As long as we can handle it in house, that’s what we’re going to do.”

Owens F. Alexander Jr., the entrepreneur-in-residence at the University of Mississippi’s Center for Innovation and Entrepreneurship, said many entrepreneurs don’t realize how difficult starting a company is. Alexander mentors students with start-up company ideas.

“It’s different than working in an structured environment, because it’s totally unstructured,” he said. “It’s highly risky. There is going to be a lot of rejection along the way, if not total failure.”

Alexander said up to 80 to 90 percent of new businesses fail.

FoxTrot, a two-year-old company, has fans that extend beyond Oxford to Columbus, Tupelo and Greenville. Scott Thames is one of them.

“One of their main ideas behind the line is ‘No rules; just fashion’ and I like that,” he said. “Their clothing gives you the chance to express yourself through your fashion.”

Melissa Cinelli, assistant professor of marketing at the University of Mississippi, said branding is very important when starting a company.

“Many consumers make decisions based on the image that a brand conveys,” she said. “I think what would be beneficial is to determine their target customers and ‘brand ambassadors.’”

Billy Robinson Jr., a fan and friend of FoxTrot, said the brand capitalizes on classic style with a unique twist.

“It brings a unique and different style that I feel Oxford lacks,” he said. “The places to shop for clothes in Oxford, particularly for men, are very slim. There are a few places on the Square, but they all pretty much carry the same styles and brands, such as Patagonia, Ralph Lauren, Southern Tide. There is nothing wrong with those brands. I wear them. But at the same time, it would be nice to have other options as well.”

“The clothing is good quality, reasonably priced and fashionable. The unique style FoxTrot presents allows for the clothing to be worn in an assortment of ways, however you want, and it still looks good.”

FoxTrot Collection’s website will launch later this month. After that, McClellan said they plan to open a store and eventually take over the world.