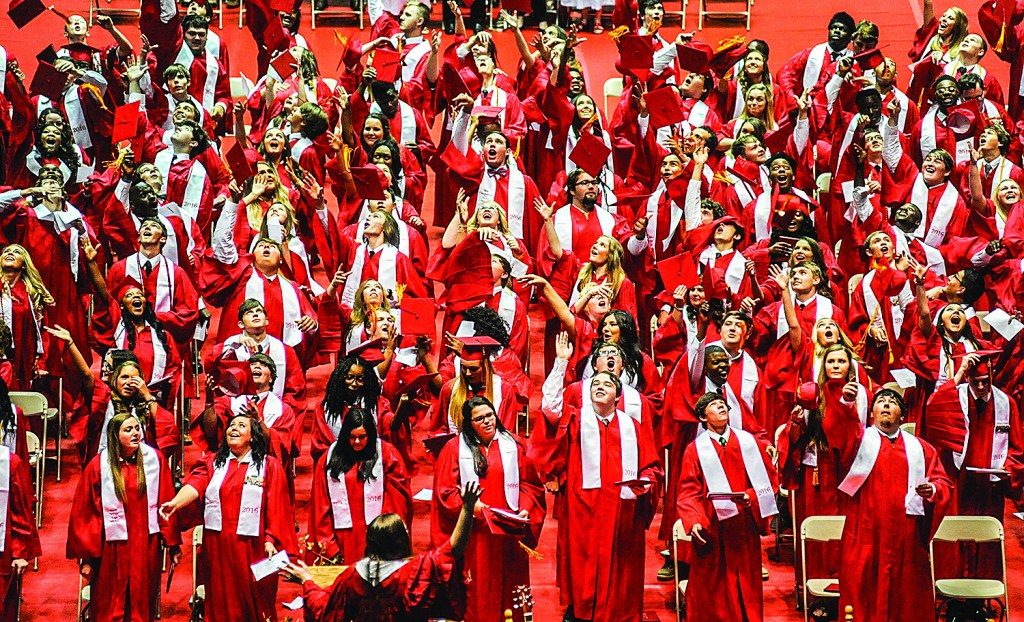 Seniors toss their caps in the air at the conclusion of the Lafayette High School graduation ceremony at the C.M. “Tad” Smith Coliseum in Oxford on Friday.

“I encourage all of you to challenge yourselves to be extraordinary and not mediocre,” she said.

“We all have achieved a great feat making it through 13 years of jubilation, adversity and enlightenment,” Bost said. “We have not reached this point in our lives by ourselves, but with the help of teachers, family and friends who have supported us. Without their encouragement and guidance, we would not be here today.”

While the 184 graduates are saying goodbye to each other, Bost said they are also welcoming new experiences.

“We will soon be filled with the joy of having new classmates, making new friends and having new opportunities,” she said. “Some of us will go to school hundreds of miles away, and some of us will stay in Oxford the next few years.

“I’ll try to keep this as brief as possible knowing that most of this will be either ignored because it’s some nerd talking about high school and new beginnings or forgotten as most graduation speeches are,” he said. “With that being said, it’s been an honor growing up with such kind and admirable students.”

Meals said he regrets that this is the end of one journey, but they will soon embark on a new one.

“From our ABC’s to English literature, and from one-plus-one-equals-two to calculus, we have come quite a ways,” he said.

“I’d also like to thank our parents for feeding us, doing our laundry, housing us and loving us,” he said.

“Go do something, anything,” he said. “Continue to be interesting people. Get a job. Pay taxes. Avoid dark alleys. Don’t go to prison. And finally, be safe driving home.”

“It’s kind of chilling,” he said. “I’m going to wake up tomorrow, and I won’t be going back to school Monday.”

Bratt said he plans to attend Northwest Community College in Senatobia for two years to earn his business degree. Then, he’ll attend the University of Mississippi and and work on his master’s in business and music.

“I’m really glad I made it,” he said. “I’m really proud of all of our senior class and everybody that helped us along the way, all of our teachers, my parents. We’ve come a long way, and it’s really been a hard road.”

Waller, who played football for Lafayette High School, said he’ll be attending Delta State University in in the fall, where he’ll major in criminal justice.