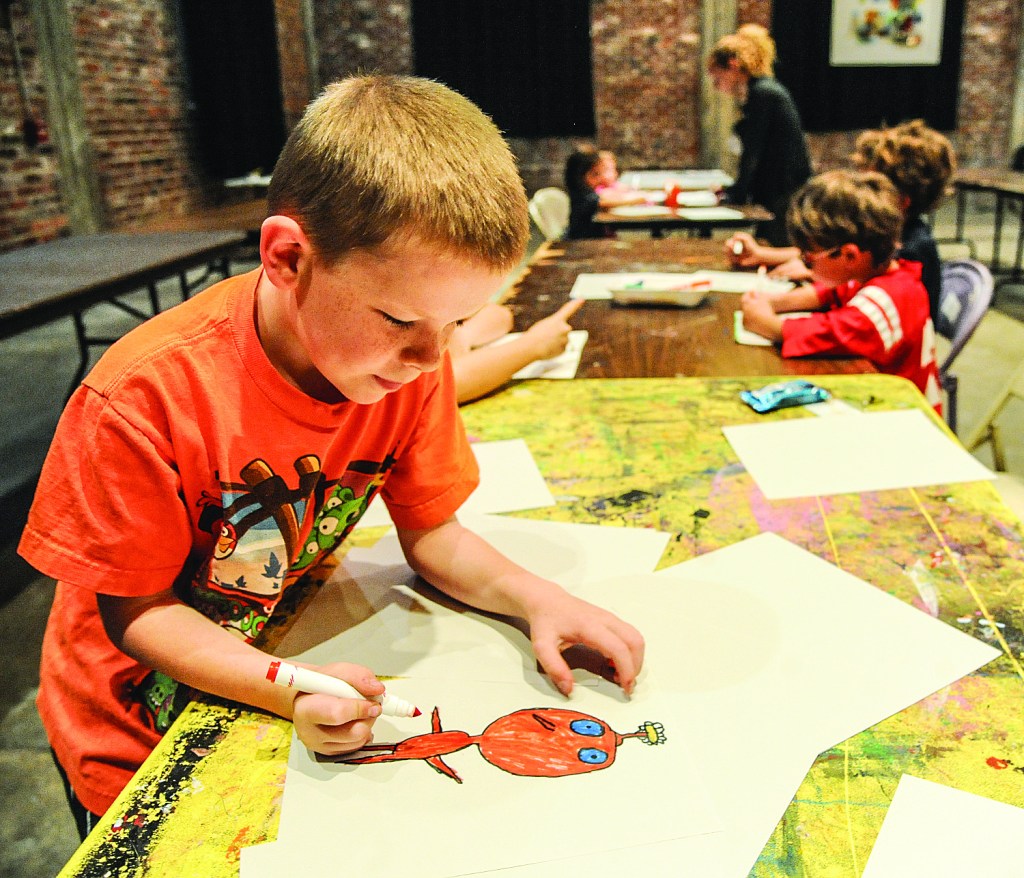 Gray Fisher draws during an Yoknapatawpha Arts Council art camp at the Powerhouse Community Arts Center this morning. YAC is celebrating its 45th anniversary with a lineup of activities.

It seems hard to imagine that a milestone like a 45th anniversary could sneak up on you, but according to Wayne Andrews, executive director of the Yoknapatawpha Arts Council, that’s exactly what happened for the local organization.

However, even when Andrews and the rest of the Council realized the anniversary, their focus on the future never wavered.

“As we looked at what we were going to do for our 45th, the conversation came up in our annual planning of ‘what do we look like in our 50th?’” Andrews said. “Look at how much we’ve changed over the last five years, what are we going to do in the next five?”

Andrews credits the initial founders of the Arts Council with helping to make Oxford the thriving artistic community it is today.

“The Arts Council was founded literally by artists and community members wanting to make sure that the arts were part of this community,” he said. “Not just that we had events and opportunities, but that it was part of how the community was viewed.”

Andrews said that having such an effective resource as the Powerhouse has positively impacted not only the Arts Council, but also local artists, who have benefitted from the extra opportunities the facility provides. Through this facility, the Arts Council can handle the logistics of producing and showcasing the art, which frees the artists to focus on their creativity and their craft.

The Arts Council offers about 325 days of programming per year at this point, and the Powerhouse is in use seven days a week between public and private use.

“Just on a Sunday, we had a church meeting in the morning,” Andrews said. “Then, we had a band come in and do work for an album they’re releasing, so they rehearsed for the album, they took photographs, they used it in the afternoon. Then, we had a potluck community discussion about Sustainable Oxford. In the evening, we had a theater group in here rehearsing.”

The Powerhouse, Andrews said, has possibly been the greatest influence in getting the Arts Council to its current status, and the resultant growth from this facility has enabled the Council to expand its reach outside of the boundaries of the central location.

“Having a space allowed us to plan and schedule so that things happen with regularity, and then we can say, ‘Great, we don’t have to do things confined to the building, let’s also plan outside the building,’” he said. “So you’ve got things like the Summer Sunset Series. We’ve been able to do things like the Art Crawl because we have a definitive space to start and end things. We’ve been able to work with other community groups to help promote their programs and create events that circulate through the town.”

Some of these programs and events with which the Arts Council has partnered in the past have gone on to grow into their own entities with their own leadership and structure, and the council continues to work to promote these local efforts through its business incubator.

Moving into the next phase of growth, Andrews said that the first goal of the Arts Council is to maintain the progress that has been made and also to help artists reach a broader audience.

“We’re looking at how we take what we’ve done in our community and take that across the state,” Andrews said. “Can we take our artists who are now working here and connect them to the rest of the state so they can make a living at their craft, but stay in our community?”

However, the biggest goal for the next five years, Andrews said, is to find long-term sustainability for the Arts Council, especially in the face of uncertainty of government funding, at both a state and local level.

Several years ago, the Arts Council started an endowment fund, and the major goal between the 45th and 50th anniversaries is to grow this endowment and find a level of independent sustainability to protect against possible budget cuts to the arts. Andrews said that in the next five years, the Arts Council hopefully will be asking for donations to this endowment campaign, which likely will be called the “’72 Society,” referring to the Council’s founding date of 1972. Andrews hopes residents will look around and see the effects of the donations and efforts of the initial group from 1972 in shaping the current Oxford community, and that this will inspire others to give today to ensure that years down the road Oxford is still a haven for the arts.

Andrews estimates that the Arts Council currently boasts around 600 members and is always looking to grow.

The Arts Council is currently preparing to begin its summer membership campaign. The council will hold its annual membership picnic on Sunday, June 5, from 6 to 8 p.m. in the Grove, and Andrews said it will be both a thank-you to current members as well as a kickoff event for the membership campaign. Golden Flake and Polk’s are donating potato chips and hot dogs, respectively, for the picnic, which will be held in conjunction with the first concert in the annual Summer Sunset Series.

Andrews said that programs like the Summer Sunset Series, as well as the many other events the Arts Council helps run, are one of the major ways that the Arts Council impacts the Oxford community.

“The best thing we can do is bring people into our community, have them come to an art and cultural event, eat in our restaurants, shop and go back home and tell everyone how great Oxford is,” he said.

Andrews said that moving forward, he hopes that current donors and potential new members will see the opportunity they have in front of them.

“Just like people invested 45 years ago — they gave their time, they gave their talent, they sponsored those first events — for us to be able to think of it that way, it’s an investment,” he said. “Think about what your investment now will do for the next 45 years.”