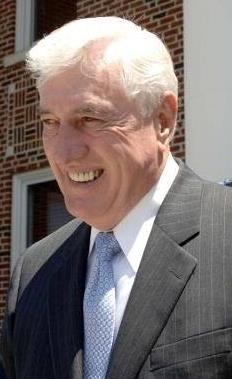 Union, Mississippi – Circuit Court Judge Marcus D. Gordon, Mississippi’s longest serving trial judge, departed this life on Thursday, May 26, 2016, at St. Dominic’s Medical Center in Jackson.  He was a lifelong resident of Union in Newton and Neshoba counties, and it was here in 1959 that he began his long legal career as an attorney.

A talented athlete in football and basketball, Gordon graduated from Union High School in 1950 and attended East Central Community College on a basketball scholarship.  After serving in the United States Air Force in the Korean Conflict, he received an honorable discharge and returned to East Central in 1955 to complete the requirements for an Associate of Arts Degree.  Shortly after receiving his degree, he married Polly Matthews on May 27, 1956, at Bluff Springs Church of God.  The couple moved to Oxford for him to pursue his chosen career of law.  In May, 1959, Judge Gordon graduated from the University of Mississippi with a dual baccalaureate degree in Business Administration and Law.  He later received the Juris Doctorate in Law from Ole Miss in 1967.  At Ole Miss Gordon was the vice-president of the Law School Student Body Association.
He began the practice of law in his hometown of Union as a self-employed attorney with the Gordon Law Firm that he shared at that time with his brother, Rex Gordon, Sr. and practiced law in Union and Decatur until 1977.  He served as Board Attorney for the Union Special Municipal Separate School District from 1959-1977, attorney for the City of Union from 1959-1977, and served as prosecuting attorney for Newton County from 1964-1968.  Judge Gordon was also attorney for the Newton County Board of Supervisors from 1989-1990.  Before being appointed to the bench by Governor Cliff Finch in 1977, he served as District Attorney for the Eighth Circuit Court District since 1972.  Before his recent retirement in March 2016, he had served on the bench longer than any other trial judge in the state of Mississippi.  In his 40 plus years on the bench, Judge Gordon earned a reputation for being a no-nonsense, firm, and fair judge with a steady hand of control over the proceedings in the court rooms of Newton, Neshoba, Leake, and Scott counties.
Judge Gordon was recognized for his expertise during the nationally televised murder trial of Edgar Ray Killen, a reputed member of the Ku Klux Klan.  Killen was found guilty of manslaughter of the 1964 deaths of civil rights workers James Chaney, Michael Schwerner, and Andrew Goodman, who were subjects of the 1988 film, “Mississippi Burning.”  JudgeGordon later sentenced Killen to the maximum allowed by law—20 years for each of the three lives lost 41 years earlier near Philadelphia.
Gordon was a former instructor in government at East Central Community College and served on the ECCC Board of Trustees.  In 2006 he was named the East Central Community College Alumnus of the Year.  He as a member of the Mississippi Bar Association, the Newton County Bar Association, the American Trial Lawyers Association, Mississippi Defense Lawyers Association, the University of Mississippi Alumni Association, and the Ole Miss Law School Alumni Association.
Judge Gordon was born October 22, 1931, near Union, Mississippi, to Marcus Benton Gordon and Flossie Clay Edwards Gordon.  He is survived by his wife of 60 years, Polly Matthews Gordon; three sons—M. Craig Gordon and his wife, Brenda Waller Gordon of Oxford; M. Darin Gordon and his wife, Polly R. Gordon of Corinth, Texas; Brian S. Gordon of Union; a daughter, Teresa Gordon Parker of Louisville; and long-time family member, Prentiss Parker, of Philadelphia.  He is also survived by his sister-in-law, Illene Ritchie Gordon, of Union; a brother-in-law, Dr. Milton D. Matthews of Pearl; and a nephew, Rex Gordon, Jr. and wife, Patricia of Union.  Gordon is survived by four grandchildren—Lanna E. Parker of Philadelphia; Lara Kelle Parker of Louisville; Kelly C. Lamb and his wife, Brenda Williams Lamb of Tupelo; Kristen L. Shepherd and her husband, Reverend Kent Shepherd, of Lake Charles, Louisiana.  He is survived by four great-grandchildren—Meghan Quintanilla and Morgan Lamb of Tupelo; Kaden Shepherd and Karson Shepherd of Lake Charles, Louisiana.
Preceding him in death were his brother, Dr. Benton Clay Gordon, and wife, Kate Welch Gordon of Jackson; his brother, the Honorable Benton Rex Gordon, Sr. of Union; a nephew, Dr. Carl Gordon, of McMinnville, Oregon; and his in-laws, Hugh and Pauline Germany Matthews of Union.
Arrangements for Judge Gordon are as follows:  Visitation in the sanctuary of First Baptist Church, 400 East Main Street, Union, on Saturday, May 28 from 5 to 8 p.m.   The funeral service will be Sunday, May 29, at First Baptist Church, at 2 p.m. with visitation from 1:30 to 2:00 in the sanctuary.  Interment will be in Union City Cemetery.
Speaking at the funeral service for the family will be United States Representative Trent Kelly of Saltillo; Mississippi Supreme Court Chief Justice William L. Waller, Jr. of Jackson; Dr. Jon Martin, pastor of First Baptist Church, Union; Reverend Paul Ninemire of Oak Grove, Louisiana; and Reverend Jon Burgess of Leake County.  Musicians include Marthalene Germany Harris of Mauriceville, Texas; John Henry of Union; and David and Peggy Germany of Union.
Pall bearers will be Prentiss Parker of Philadelphia; Leake County Sheriff Gregg Waggoner of Carthage; Joe Mack Thaggard of Madden; the Honorable Chris Collins; the Honorable Caleb May; the Honorable Brian Burns; the Honorable Rex Gordon, Jr.; Kelly C. Lamb of Tupelo; Billy Pat Walker of Union; and Tommy Matthews of Vaiden.
Honorary pall bearers are Newton County Sheriff Jackie Knight; Neshoba County Sheriff Tommy Waddell; Scott County Sheriff Mike Lee; Mack Russell; Chris Davis; Kaleb Davis; the Honorable Judge Vernon Cotten; Leake County Circuit Clerk Kathy Henderson; Janis Watts; Neshoba County Circuit Clerk Patti Duncan Lee; Joe Rigby; Scott County Circuit Clerk Becky Gray; and past and present members of the judiciary and law enforcement in Leake, Neshoba, Newton, and Scott counties.
Milling Funeral Home of Union is in charge of arrangements.